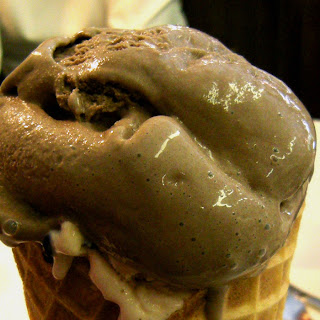 I’ve been to some of the nation’s largest festivals, and now I’ve been to one of the smallest in my home state. Though I can’t imagine why the Berryville Ice Cream Social doesn’t have droves at its doorstep.

The annual event on Berryville’s town square is a great way to kick off the summer with music, arts and crafts and plenty of ice cream.

It starts off on Friday, really in the afternoon in evening with all sorts of 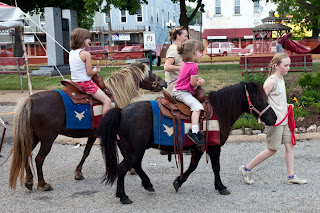 vendors selling everything from wind chimes to bracelets, kids playing in the park and an evening of local musicians jamming outside the Heritage Museum. On Saturday morning there’s a 5k run, tours of historic Berryville via tram, pony rides and a climbing wall for the kids. There’s music and dancing in the streets. And of course there’s ice cream.

This year I got the chance to be one of the judges for the annual cooking competition. The theme was berries. Last year there were more than 50 entries. I was a little surprised to see just 7 entries on the tables laid out for the judges to sample. No worries, though. 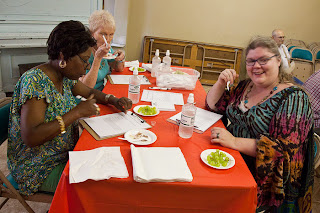 I was introduced to the other
judges, and we all took a look at the seven entries and did our judgments of appearance. From there we sat down, and the volunteers from Community First Bank came and brought us sample after sample of each dessert for us to try and judge on taste, creativity and overall. 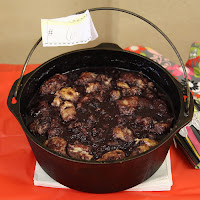 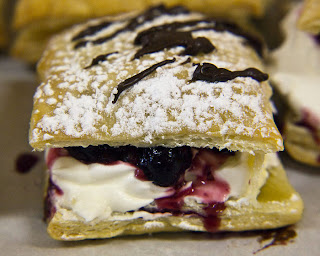 The votes tallied, we discovered that the little blueberry pastries from Maria Romero were our top choice. Maria won a $200 prize and bragging rights. Shirley Clark took the honorable mention and earned a $100 grocery gift card for her efforts. 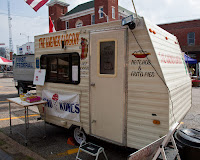 After the judging, we went to hunt down another story at the festival. Along the row of vendors (including the Cattleman’s Association serving up brisket, a cart selling funnel cakes and pork tenderloin sandwiches and the Weinie Wagon) we found the Cajun Lunch Box cart. 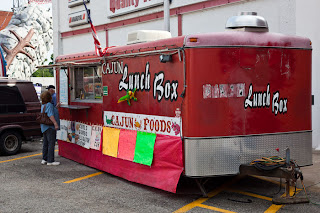 My photographer had discovered the vendor while I’d been involved in the judging. He’d already procured two hand pies -- a shrimp fried pie and a crawfish fried pie -- and shared them with me. I had to go back and see what was up with this.

Turns out the Lejeunes travel to these smaller festivals in the area. They live in Oxford, AR but Mr. Lejeune is from far south Louisiana, south of I-10 and with that unique Cajun accent that’s almost incomprehensible. He and his wife were very sweet, though, and answered my peppering of questions.

The specialties served up at the Cajun Lunch Box are all authentic South Louisiana staples. They include Gator on a Stick (sold out long before we got there), etouffee, cajun sausages cornmeal battered and served up like corn dogs, gumbo, red beans and rice, boudin links, Po’Boys and sweet tea.

Unlike a lot of other immigrants from these parts, they didn’t come up because of Katrina. Seems Mr. Lejeune found himself a mate and partner and he came this way because of love. At least that’s what I was getting from the conversation.

The Cajun Lunch Box doesn’t make a whole lot of appearances. It’ll be in Melbourne for the festival up there in a few weeks and maybe a few more places but then they’ll pack it in for the season before it becomes truly hot. 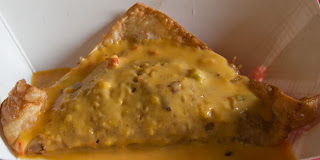 Now how about those pies? They were awesome. The shrimp was good enough in its rich broth with rice and green peppers -- but the crawfish pie just blew me away with its low heat and lovely flavor. The pies are made from the etouffee. 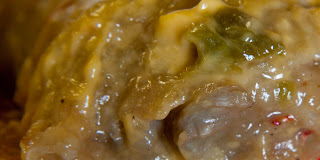 The dough is actually stretched out and rolled out when you order one, the filling dolloped onto the dough and the dough crimped by hand before the pocket is dumped into the hot grease. The whole thing is topped with nacho cheese sauce and handed out the window in exchange for $3. I found the dough satisfactory, even crisp despite the cheese sauce. It was filling and tasty, though I didn’t want to think about how much cholesterol was going into my system! 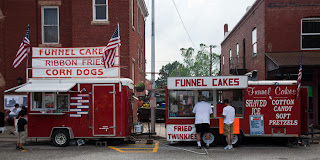 The social, which had been full of kids when we arrived, was slowing down. Claps of thunder and the occasional squall of a downpour had chased off many of the participants and attendees, but the folks with Community First Bank were dividing up the creations from the berry dessert contest and preparing to serve them for free to the crowd. The Cattlemen’s Association folks were huddled under the tent, the scent from the smokers almost hypnotic. I saw couples out by the gazebo, a few a little muddy from the rain, talking quietly.

I want to come back to this festival. I understand numbers were down this year, but that has a lot to do with the weather and goings-on elsewhere. Maybe spreading the word might get a few more folks to come park off the square and enjoy a day of it next year. I betcha that could happen.
To purchase this article, email Kat Robinson at 6/14/2011 09:39:00 PM