Chicagoland: Done Been The Heck At Carm's. 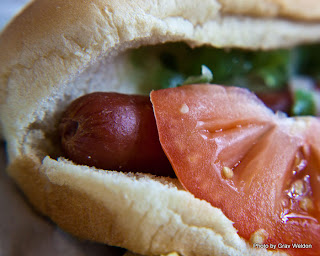 I have had many an experience over the year around Arkansas -- and a few non-Arkansas locations -- where I am recognized when I walk through the door.  Sometimes it’s a fawning over.  Most of the time it’s a raised hand of acknowledgement, and for a few places it’s a hug.  I get that doing this.  It’s a perk.  I can honestly say I have made friends along the way.javascript:void(0)

I always thought it was a Southern thing, outside of the camaraderie fo a “Cheers” type establishment, of course.  Never did associate it with the Northern climes -- until Tuesday morning. 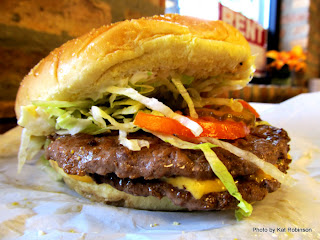 My photographer and I were wrapping up our Chicago travelogue for one of the magazines that hires us out for such things.  Wrapped up, actually -- we’d already finished the bones of the story and were literally getting ready to hit I-55 and coast on down back home.  But he insisted we drop by Carm’s.

Not that I was opposed to this.  Grav had talked up Carm’s for over a year to me, along with a restaurant called Hot Doug’s that we missed out on thanks to a family vacation (they were closed the week of Memorial Day, darn it).  When we were in Park Grill having a magnificent top-end restaurant burger he was plugging the flat patties of Carm’s; when we were grabbing a dog at Max’s To Go and I was exclaiming my joy over the best dog I’ve ever eaten he told me “well, you haven’t had Carm’s yet.”  This place meant a lot to him. 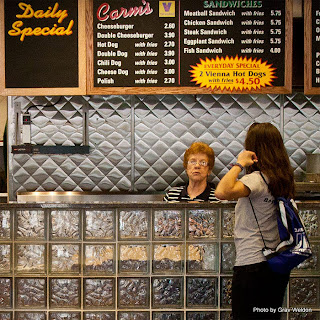 So we headed to the corner of Polk Street and Carpenter in Chicago’s Little Italy district to have ourselves one last taste of the city.  Magically there was one parking spot, right next to the side of the building.  We walked through the door and a woman in the back hollers “where the hell have you been?” at Grav.

Yeah, I laughed.  So did he.  Didn’t matter that he’d grown out his hair and beard and shown up in an entirely different outfit from what he wore during his Chicago days, Mom recognized him. 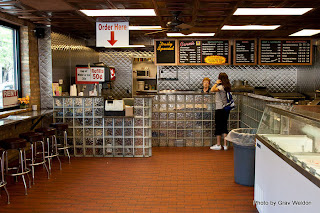 I never did figure out Mom’s given name.  Everyone called her that.  She talked with my photographer for a few minutes and asked questions -- where he’d been, what he’d been doing, who I was.  When he introduced me as his journalist she eyeballed me a minute and asked me what I was hungry for.  I told her I wanted that Everyday Special ($4.50) up on the board -- two dogs with fries.  She asked me what I wanted on them and I told her everything --except mustard.  And ketchup, of course.

She grinned.  “You know how it’s done!” she laughed.

“I taught her well,” Grav said.  Then he asked me about the sandwich.  I’d planned to come in and try the Italian Beef sandwich -- heck, I had a commission to write a story about an Italian Beef sandwich and this was my last opportunity.  But really, what a deal on those dogs and fries, right? 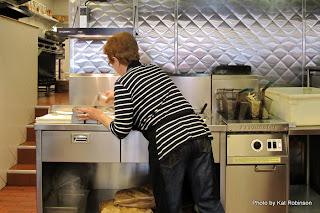 Mom salted fries and got them going in the cooker.   Grav ordered a double cheeseburger and Mom pulled out a couple of buns and sat them out.  She pulled a stack of fresh beef patties separated by wax paper from a refrigerator unit, pulled two off the top and peeled them off the paper and onto the griddle.  She kept turning around and talking to us as we went along, asking where we’d been and what Grav wanted on his burger.  She flipped the burgers and slapped down a couple of slices of American cheese on them… and a few moments later used the spatula to slide under one patty, plop it on the other and slip it onto a bun. 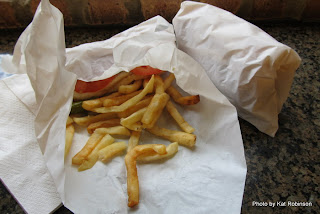 One of the guys there (I’m guessing he might have been family, there was a resemblance but who knows?) pulled out my dogs.  He took one, dropped it into the bun and dressed it, then did the same with the other.  One he put on a sheet of wax paper.  He grabbed a scoop of fries and shoveled them on top then expertly wrapped the mess up in a cylindrical envelope and started on the other one.

In the interim, while Grav had been conversing with Mom, we had somehow agreed that I still had to have that Italian Beef sandwich.  I didn’t know where I’d put it -- it was just about 11 in the morning and I’d already consumed a chocolate filled croissant from Leonidas’ Chocolate Café along with a brown sugar latte… the dogs were going to do it for me.  But then again… you only live once.  Besides, road food was a good idea, right?

I watched Mom put the beef in the broth in the special cooker I assumed was just for that beef.  I anticipated a damp sandwich.  But I was hungry.  She did ask how I wanted it dressed, and I just told her however it came was good for me.  I wanted a dog. 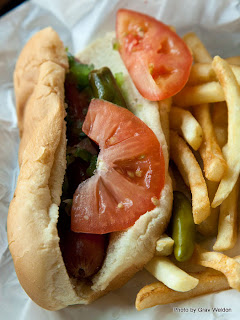 I unwrapped one of the envelopes and we took our prerequisite pictures.  It was red-ish, not the deep red of the dog I’d had at Max’s but plump.  It smelled like beef heaven.  It was obscured by hunks of tomato, a couple of sport peppers and a relish that was almost blue in color -- the proprietary relish of the Vienna Beef company, I learned later.  I took it in two hands and tried it and all but inhaled it, sport peppers and all.

I’m not much on peppers, but the bright and crispy little peppers seemed to be necessary to the proper consumption of this dog.  It was just as important as the liberal dosing of celery salt that had been applied.  The fries were also good and were the only thing that touched ketchup that day. 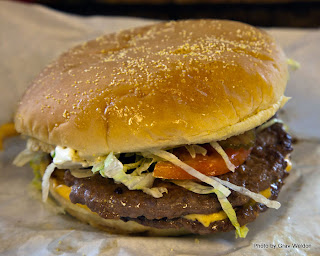 Of course, Grav had to share a bit of his cheeseburger with me, seeing as I have this profundity for finding good burgers and I needed to give it a shot.  The two flat patties were more than six inches across, served up on an adequately large steamed, cornmeal dusted bun.  Steamed, yes.  Not toasted as I have become accustomed to almost every else.  The shredded iceberg lettuce and tomato slices took nothing

away from the patties, the star of the show.

They were good juicy patties that melded completely with the cheese to form a hot bite of soft meatiness with a little salt-and-pepper kick.  The juice had softened the bottom bun and imparted that great beefy flavor to it.  A truly great burger that played like a smash-burger -- though it started out flat. Awesome. 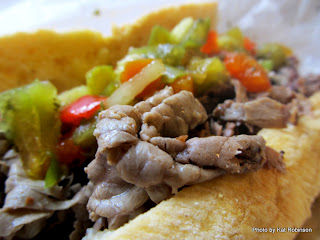 So by this time the Italian Beef was out, and we were asked if we were going to eat it there or take it to go.   We thought about it and asked to take it to go, but to let us shoot it first.  And I had to try it.  I mean, I’d never had an Italian Beef sandwich in Chicago, and it was supposed to be different, right?

And it was.  The bun itself was a crusty Italian bread cut, nice and soft on the inside and soaking up all that moisture from the meat.  It was less salty than I would have figured, just beefy but not too savory.  The condiment was giardiniera, a combination of peppers and onions and carrots pickled together in such a nice way.  It took something that ingredients-wise could have been the start of a roast beef sandwich and made it specifically Chicagoan. 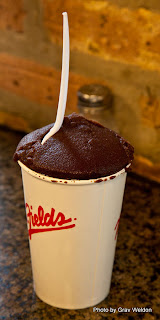 I managed two bites.  It was really good, but I was about to pop.  We wrapped up what we had left and packed it away in a sack.

But were we done?  No, of course not.  Grav wasn’t letting us leave without an ice.  He was talking with Stevie Devino, Mom’s son and the ice makin’ man.  He comes back over with this chocolate ice that just stood out of the top of the cup.  I’ve had ices before at Chicago O’Hare (or was it Midway?), always lemon. 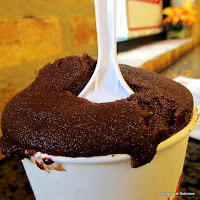 This chocolate ice tasted of pure cocoa powder and sugar, very light and pure and clean.  A clean chocolate flavor -- not diluted by milk or cream or the like but just… chocolate.  It was divine.

It was getting late.  We had a very long trip ahead of us.  We went over and shook Stevie’s hand and gave our salutations to Mom.  As we were heading out the door she hollered “how do you say it?  Y’all come back now, you hear?”

“Bless your heart!” I laughed.  So friendly! 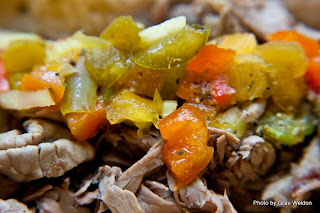 So… this should be the end of the story, right?  Nope.  We hit the road, and a couple of hours later we’re in the vicinity of Bloomington, IL and hungry.  Wanting to keep heading south (and agreeing that Illinois was a very long state to drive through), we pulled out the rest of our leftovers.  I had at that Italian Beef, and darn if it wasn’t better.  The now foil-wrapped sandwich had amalgamated into a gelatinous mass of beef and bread dotted with pickled vegetation and a flavor of beefy goodness that made me very content.  Road food, indeed.

Before this trip, I had only been in Chicago to change flights headed somewhere else.  Now I’m going to have to make more trips up north, and when I do I’ll have to stop in at Carm’s.  I wonder if Mom will ask me where the hell I’ve been.  I think I’ll try the pineapple ice next time, or maybe a half-and-half with the cantaloupe, which I didn’t hear about until I got home.