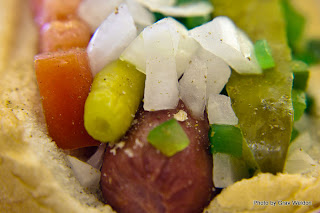 It’s hard to imagine that in one week’s time I have consumed three distinctive Chicago dogs. The first, at Max’s Take Out on Adams a few blocks from Chicago’s Millennium Park. The second, at Carm’s Italian Beef and Ice in Chicago’s Little Italy. The third, at Lynn’s Chicago Foods in Little Rock.

What? No, seriously. Until Saturday morning I had no idea that you could really find an authentic taste of Chicago in my hometown -- nor would I have really known the difference.

I’ve known about Lynn’s for years. It went into the space formerly occupied by the doughnut shop where I’d take my little brother Zack in for a couple of lemon fills and a bag of holes a couple of mornings each week when we were growing up. Zack is 12 years younger than I am; when I was 16 and just starting to drive I’d take him to kindergarten down Geyer Springs and if we had time we dropped in for pastries and chocolate milk. 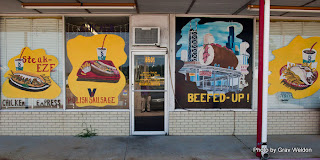 About the time I graduated high school the doughnut shop went out, and some 18 years ago (two years after I graduated) Lynn’s Chicago Foods was born, the product of a Chicago West Side family moved to The Rock bringing their unique flavors of home with them. It was there -- but I was gone, first to Russellville for school and then to Jonesboro for a job. It’s about two miles from where I grew up, but I had never stepped foot inside the store.

I have, however, consumed of all things their catfish a few years ago when a co-worker brought some to me. That was about it.

After my foray into The Windy City over the Memorial Day weekend, I was Jonesed about Chicago dogs. I dreamed about them. I was already starting to figure out how I might get another assignment up in those parts. I went and did my radio appearance on KARN’s The Dave Elswick Show, and Dave asked if Lynn’s held up to what I’d experienced in Chicago. And I couldn’t answer for sure. So of course we had to go check it out. 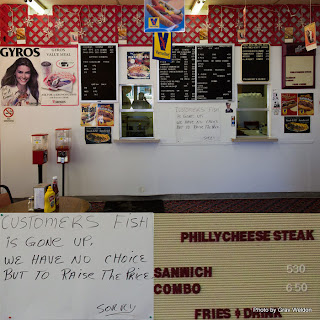 We dropped in right at opening time (10 a.m.) Saturday morning, with the idea that lunch would be better than breakfast. The doors had just been unlocked and the lone proprietress was manning the kitchen. We came in and stared at the menu boards that stood over the two windows into the kitchen, along with various food posters touting Kronos gyro meat, Vienna Beef dogs and a hand lettered sign that read “Customers Fish Is Gone Up, We Have No Choice But To Raise The Price. Sorry.” The north facing window was coated in a yellow plastic film, yet every table inside looked tidy.

It took a few minutes for us to decide what it was we needed to be eating. There were so many choices -- hot dogs, Chicago dogs, chili dogs, burgers and baked beans and Italian sausage, catfish and wing dinners and gyros and Philly cheesesteaks. I considered checking out the Italian beef sandwich, but I couldn’t resist. I had to have another dog.

“What would you like on your dog?” the lady behind the counter asked me.

“Everything you’d find in Chicago -- except mustard. And no ketchup.”

“You don’t put ketchup on a hot dog.”

“I’ve coached her well,” piped my photographer, my resident Chicago expert. She just laughed some more.

He felt more adventurous about things and decided to order a gyro, one of the few delicacies we hadn’t gotten around to ordering while we were up there. We had a seat at one of the tables and talked while we were waiting.

“This place smells like a Chicago restaurant,” he told me.

“There’s a certain smell you get, it’s not a bad smell -- it just smells like the city. And this is the first place I’ve been to down here that smells like that.”

We waited a little bit… after all, with just one person manning register and kitchen, what could you expect. But she called out from time to time and asked if we needed anything. Grav peppered her with questions… he was truly enthused about finding a place where he could get all those flavors he’d been craving over this time right here in Arkansas. That’s how we found that the family had come to Little Rock 18 years ago from off Roosevelt Road on Chicago’s West Side. They traded stories about where they had lived while up there. I found it amusing.

Grav even pulled out the camera and shot into the kitchen while she was working, which sparked a “Lordy!” from our kind hostess. 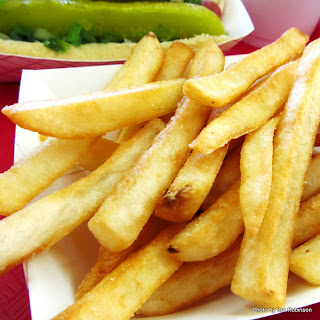 She called us to the window a few minutes later and passed over two red trays. Mine came with my Coke (I was on a Coke kick after my trip, back to my iced tea now), the dog and a pile of fries. Drinks are $1.47, while the Chicago dog with fries is $4.25 (a plain dog is a dime cheaper). I snagged a fry while getting shots in. They were perfect -- crunchy on the outside, soft on the inside and salted just right. 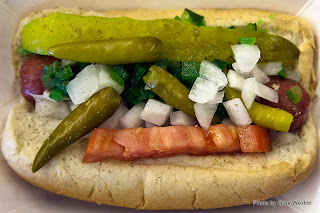 Still, they were nothing compared to that dog, all dressed out and showing off. You could barely see the big Vienna Beef weiner under the onions, the almost-blue Vienna relish, the dill pickle spear-ette, the half slices of tomato and the sport peppers. It was nicely tucked into its white bread bun and sprinkled all over with celery salt. 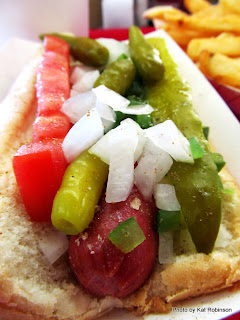 I was not expecting a Little Rock joint to come up with something as good as I’d found in Chicago. But dang if it wasn’t just the bomb -- a little more stringent thanks to the onions (which I didn’t have in Chicago), a little spicier (we joked that the peppers must have marinated longer thanks to being down here) but otherwise this dog was just about identical to what I’d had up north. I all but inhaled it, sucking down Coke between bites because the peppers were hitting me right in the nasal passages. 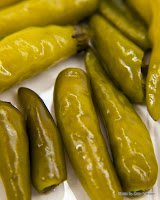 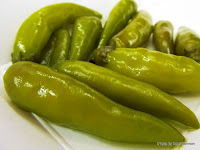 Grav had asked for extra sport peppers on the side -- and got them. He ate a few of them with a fiery gusto, bragging the whole time about how much he liked them and wondering aloud why he couldn’t get them anywhere else. 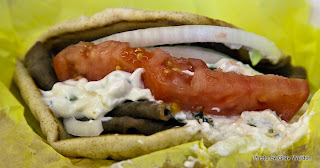 But his main eat of the day was the gyro. At $6.75 for the combo ($5.70 on its own) it was a hand and a half worth of fine gyro meat packed generously and tight in a pita with tzatziki sauce, tomato slices, a little lettuce and onions. There were large hunks of cucumber in the tzatziki sauce. The beef was succulently moist with a nice griddle char. It was nicely seasoned and a little salty. The fresh tomato slices were a nice touch -- but Grav did have to point out that the gyro did have the weirdness 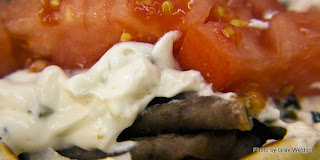 common to almost all gyros sold here -- it had lettuce in it. That’s just weird.

It was substantial fare, and the entire time Grav was going on about how much he liked the place and how it was now his favorite place to eat in Little Rock. I reminded him of great places like Star of India, Capital Bar and Grill and B-Side but for that particular couple of hours he could find no place finer than Lynn’s. 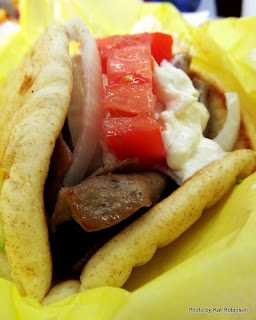 We had places to go and had to leave after our early lunch, but we had to promise to come back. That won’t be a hard promise to keep. Now that I know there’s a place in town where I can sate that Chicago dog hunger, I will be more apt to go drop by and have myself one. Maybe I’ll try that Italian beef next time, too.

You’ll find Lynn’s Chicago Foods on the southeast corner of 65th Street and Geyer Springs in
Southwest Little Rock. It’s open for lunch and dinner every day except Sunday. (501) 568-2646.