The Art, The Food, The Travel and Some Pizza, Too. 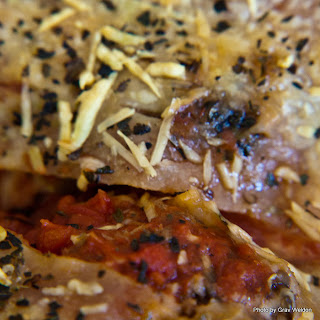 I’ve never known all that much about the art scene. Always been a bit of an outsider in that respect. I have many friends who are making their living as artists; Tracee Gentry, Louis Garcia and Michael Murphy immediately come to mind. But I’ve always been a media chick. I’ve been the gal on TV or radio who’s talked a bit about the art and such but never really been part of it.

In a way, that changed a bit when I started this blog. I didn’t want to just do another “here’s my entry” sort of essay on things. I wanted photos, and I took them. In the beginning, they were bad. Truly bad. From time to time I’d have a serendipitous morning where everything came together and I’d have one good shot out of 20 if I was lucky.

I learned a bit here and there. And then I got better. For nearly three years it was just me (with the occasional assistance of my friend Leif Hassell) shooting the images you see here on Tie Dye Travels. 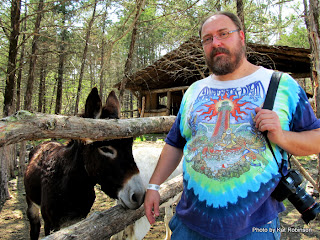 As most of you know, I acquired my lead photographer last summer. Grav Weldon’s previous work had focused primarily on travel and tight subjects such as the disintegration of Fort Chaffee and black and white images of cemeteries. He came along with me for the Scenic Highway Seven shoot last year and a partnership was born. Frankly, having his camera available meant I could concentrate on the other aspects -- the interview, the documentation of the scene, the writing and the art of the sale. 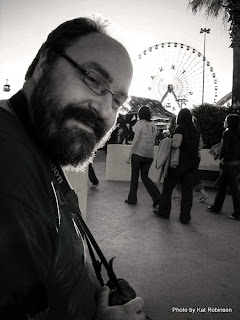 Grav’s work here and in the other publications I work with (Eat Arkansas, Lonely Planet, Serious Eats, 2njoy and Arkansas Wild) has garnered a lot of notice, and this spring he was offered his first big city professional art show. Chicago’s Soaringbird Studios offered Grav the opportunity to share the work he’s accumulated this year.

The show, “The Art of Food And Travel,” premiered over the Memorial Day weekend. In the weeks before the event, there were many steps. For one, we coordinated with 2njoy Magazine to create a Chicago travelogue while in the Windy City, to make better use of the expenses we were already going to incur on the trip. I worked on the nuts and bolts 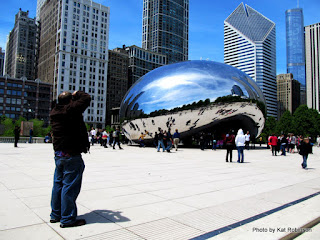 of contacting our hosts and setting up arrangements. This part wasn’t new to me; I do this any time I make a big trip, so I can get the best “bang for my buck” out of the brief amount of time I spend in a city. I picked up other stories that will eventually appear here on Tie Dye Travels and on Serious Eats.

Grav’s work was different. He had to go through a year’s worth of images -- thousands of images of our travels in Arkansas, Tennessee, Mississippi, Oklahoma, Texas and Louisiana -- to find the 28 images that would be presented in the show. He printed each of these individually, found frames and matted and framed each one. We coordinated on narration that would accompany each one in the show, the idea being that the story of how the camera came to be available at that exact point in time was just as much a part of the artwork.


Grav also worked with Julieta Alvarez, the owner of Soaringbird Studios, to set up a date and time not just for the show but for the set-up in advance. She in turn contacted a select number of people in the art scene who she believed would be interested in Grav’s body of work.

All of this seems normal and straightforward, right? Well, I’ve learned a whole lot about things in the interim. A whole lot. 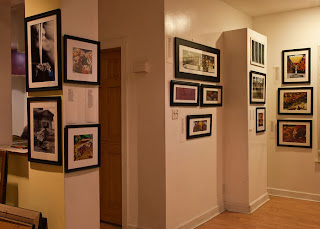 One thing I learned quickly was how to utilize a limited space to display art. The space at Soaringbird Studios (the smaller of Julieta’s studios) is minimal: the first floor living and dining area of a three story house on South Wood Street. I have to admit -- I’ve been so afraid of placing frames on a wall that in the home I’ve had for 10 years in Little Rock there are still bare walls and stacks of framed photos that have yet to make it onto a nailhead. Yet there was something about being able to utilize every wall, grouping each experience’s worth of photos and adding that narration… something about it was extraordinary.

It took an hour to set the photos out. Once they were up, we knoshed on cold pizza and got our guts settled before the onslaught of attendees. Neither of us knew how many to expect, or what they’d be asking, or even whether or not anything would sell.

Grav did bring in a box of experimental prints from the car, planning to share them with Julieta and other artists that might come by, searching for a little commentary. Funny, that.

The show had officially been “open” about five minutes when the first attendees showed up -- a couple of readers of Tie Dye Travels who were also friends of Grav’s. We shared our stories of the images and received some good commentary. Then Grav brought out his experimental prints, and eyebrows were raised. The first sale he made was actually this image of Ms. Jennifer Jones, the grand marshal of this year’s New Orleans Roadfood Festival. All of that work on these other images, and it’d be the first to sell. 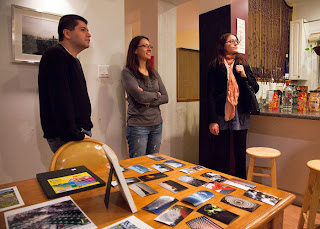 Others came, invitees who had an interest in food art and who took great interest in what Grav had to offer. Some asked if he did custom work. Others made noises about picking up more of the proprietary image work Grav still had in his print box. A few of the beautiful prints he had brought were claimed, notes were made for those pieces to be picked up later and the show went on.

What was extraordinary about the process was the interaction between artists. A filmmaker came by. Several visual artists. A politician. A couple of art scene girls. Wealthy buyers rubbed elbows with starving artists and itinerant explorers like me. Ideas were exchanged. Contacts were swapped.

One of those contacts was Frank Aguilar, a state representative centered in Cicero. He and Grav talked about Grav’s proprietary process and set up a shoot for the next morning. Who would have guessed this tie and shiny shoes straight laced gentleman would want to be photographed in leathers on his motorbike at the start of Route 66?

The show finally broke after midnight, conversations finally petering off and attendees drifting home. It would stay up through Tuesday morning, when we went to collect the pieces that hadn’t sold and work out arrangements with the gallery owner. Grav received the good news of interest in two more shows for later in the year featuring his new process.

This is all rather dry reading, I betcha, and you’re probably wondering what all this has to do with pizza. I tell ya, it’s something kinda serendipitous.

The gallery show did give Grav some confidence, and he was interested in showing his work here in Arkansas; after all, a majority of the images displayed in it were from travels in-state here. He sought out a couple of places that offered to take a few of his new process images -- but not of the food and travel.

That is, until a week and a half after the Chicago show. We stopped in at OW Pizza across from the State Capital to fuel up a little after a long day of collaboration on the pieces that will appear in these magazines about our Chicago trip. Miss Kim had those beef meatballs I’ve been dreaming about. I introduced her to Grav and suddenly a new partnership was formed.

See, OW Pizza is a great little pizza and pasta and sandwich place that doesn’t get a whole lot of attention when the Legislature’s not in session -- which is a shame, since the food there is extraordinarily good. The herbs for the sauce and many dishes are grown on site. The meatballs taste like no one else’s -- they’re made there, rather than pulled out of a bag from a food distributor. The tuna salad has capers -- capers! -- and the marinara sauce is mature yet fruity. I think I’ve talked about this before.

So Grav’s talking about his desire to share his art in this market over a big platter of pesto pasta with artichoke hearts and mushrooms while I’m digging my meatball-mushroom calzone -- and he’s showing off his test prints and talking about his artistic journey. And Miss Kim is talking about how it’s been a struggle to survive with the place in this tough restaurant market and how awesome Grav’s images are, and… well, it just seemed natural. Grav would utilize OW Pizza’s walls as his gallery.

We went back a couple of days later to set in his first set of photos. It was a challenge. OW Pizza is a converted gas station, and the walls are plaster over concrete block. The first hangers didn’t work. One frame wouldn’t hold its wire back. We were tired and things weren’t happening the way they needed to happen.

Miss Kim, though, she’s something else. Once she made sure customers were being well cared for she took hammer in hand and helped us set nails and decide on where to place art. She made sure we were hydrated and gave us feedback.

I have no idea how Grav’s work will sell. It’s eclectic and unusual but I seem to like it okay. His nine images are up, five on the right hand wall just inside the entrance and the other four in the next room to the right. Hopefully the right collector will see his work and purchase something. It must be nerve-wracking, waiting for that first sale and wondering if each item is commercially viable. Heck, I get to feeling that way about my blog posts sometimes!

But I’m hoping it’ll be a mutually beneficial relationship. Grav may be able to bring new customers in to OW Pizza that might not have considered it a good lunch destination before. And Miss Kim’s customers might discover this talented photographer and take home some of his work.

Me? I’ve learned a lot about the art business, which might help me better relate to artists I may cover in the future. It’s an interesting journey.

If you’d like to view Grav’s art and travel work, head over to OW Pizza. It’s located at 1706 W. Third Street in Little Rock, across from the State Capital. They’re open 10 a.m. to 7 p.m. Monday through Friday, making it a great place for lunch or to grab a bite before heading home. (501) 374-5504 or check out the Facebook page.

Or check out Grav's splash page.