This Lincolnwood staple is a couple blocks off I-94 at Exit 39B, a block and a half west of Cicero on Touhy Avenue.  It’s worth a drive from downtown -- and there’s free valet parking, to boot. 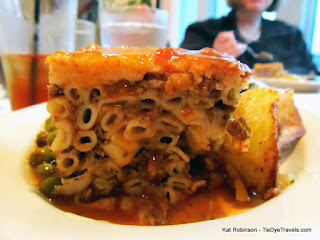 A family operation for decades, Psistaria is not much to look out on the outside.  Inside, though, it’s straight out of Santorini… complete with fresco.   The real smashing décor, though, is what you can order off the menu -- Chicken Breast Spanaki (stuffed with spinach), Triple-Cut Lamb Chops, Roast Leg of Lamb; a selection of seafood including Stingray, Sea Bass and Giant Scallops; Sweetbreads, Loukaniko (Greek sausage) and Baby Octopus. 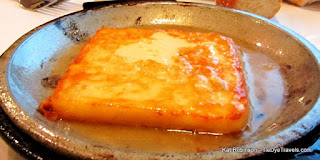 But the best deal is by far Psistaria’s Family Style Plate.  For $20.50 a person, three or more people can enjoy a veritable feast of Mediterranean delights.  The show starts with the fiery delivery of Saganaki (imported Kefalotyri cheese flamed with ouzo) to the table.  It’s accompanied by an Italian style bread with butter; a Greek salad with tomatoes, cucumbers and Feta; and a gyro appetizer with gyro meat, tomatoes, pita quarters and some of the richest Tzatziki sauce I’ve ever encountered. 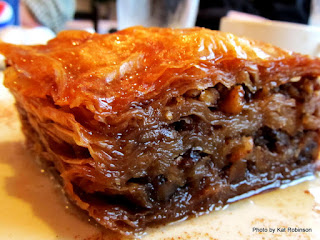 You could easily fill up on just the starters.  They’re followed by massive platters for each person that include tender slices of roast lamb or chicken, a choice of fabulously hearty pastitsio or opulent mousaka -- plus a selection of sides including a fragrant golden rice with saffron, citrus-spiced potato slices, savory peas and fresh stuffed dolmedes (stuffed grape leaves).

Add in coffee and your choice of dessert -- a popular and well known rich baklava, crème caramele or galactobouriko (a phyllo-crusted milk custard pie covered in honey syrup) -- and you have one of the best dinner deals you’ll find in the area.