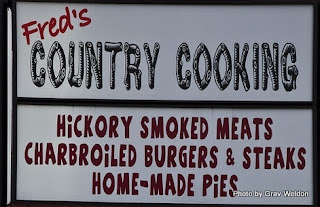 W'ave talked about griddle-smashed and kitchen char-grilled burgers a lot here. But what about a smoked burger?

That’s what you get when you order one of the burgers on the menu at Fred’s Country Cooking in Boles, AR — that’s north of Mena and south of Waldron on US Highway 71. Yes, it’s way the heck out there. But it’s got good eats — like catfish, fried pies, barbecue and, well, burgers.

Now, I have to say — the burger my traveling companion ordered on this trip was not what I might normally have ordered. Burgers are priced by the stack as it were — hamburgers start at $2.95, cheeseburgers are $3.25, all the way up to the Double Meat Bacon Cheeseburger at $6.95 — which my companion ordered. For the record, burgers come with a choice of potato. He chose the home fries. 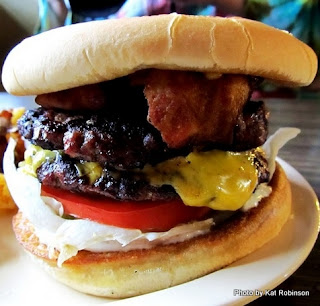 The burger comes out, and it’s big and tall, with American cheese melted right onto the patties. One sniff, though, and there was this acknowledgement that this was one different burger. It smelled of hickory smoke, and it smelled wonderful. The seedless lightly toasted bun was a little wrinkly, as if it had been slightly steamed as well. The burger patties nestled right under the top bun; below, iceberg lettuce and a couple of slices of tomato along with ridgy hamburger dills and white onion ringlets sat on a little mayo on the bottom bun. 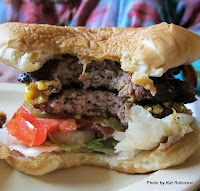 The patties were cooked medium well, with a Cavender’s style spicing to them. They were reddish on the outside from what I believe was exposure to air and smoke while sitting on the grill. They were topped with a couple of fat slices of country bacon that added a lovely saltiness to it all.

But where he lucked out were the home fries. They were absolutely perfectly seasoned, and heck if we could figure out what with. They were spicy but they weren't. There was evidence of paprika, black pepper, salt, parsley and at least one other spice there… they were buttery and soft but still held their composition without mushing up too bad. The griddle crust on them was especially tasty. 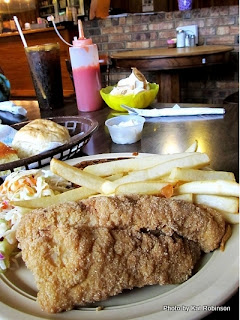 Me? I was tempted by a number of items on the menu but settled on the catfish special on the wall ($6.99 with coleslaw, potato choice and bread — rather than the dinner for $8.25 that includes potato, salad and bread). I wasn't expecting the beans that came with it — they were similar to baked beans but contained no meat, a relief to me. Somewhat sweet and syrupy but still firm.

The coleslaw was a long-cut version, non-sweet but with a nice chew to it. I assumed it was formulated in such a fashion to be best for serving up on BBQ sandwiches. I liked it, though. The French fries, sadly, were very typical and yellow. 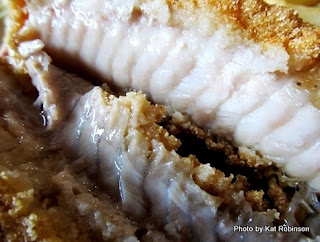 But the catfish… I thought I’d end up with a few pieces here and there, but what I was served was a whole fresh catfish fillet. No bones about it (or in it), it was clean and juicy with no muddiness at all. The cornmeal batter was just light enough to give it substance and containment without being overbearing. It had just the right bite to it. I had it with some offered homemade tartar sauce. The hush puppies were a little sweet.

And I was brought both a biscuit (pretty average) and a lump of cornbread (non-sweet and yellow but with a nice texture, good with butter). I have to say, it’s about the best catfish I've had this year. Now I have to go back and try the barbecue. 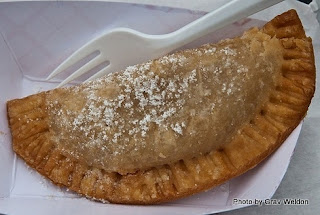 So we got ready to leave to beat a storm moving in, and decided to pick up a fried pie to take with us. This little apple fried pie reminded me of the days when McDonald’s had a fried pie worth mentioning. It was just right for one hand, with a cinnamon packed crust and very tender apples. I must try another.