Way up in north central Arkansas, all the way up Highway 14 and across Highway 125 to one of the many fingers of Bull Shoals Lake, out past a tiny town called Peel… is a last vestige to a different time.

When my home state’s wildernesses were still wild and the roads still soft, there were a great number of ferries. Most of them were for river crossings here and there. Many of the names that have stuck with us through time recall those ferry days -- Greers Ferry Lake, Toad Suck Ferry, Jenkin’s Ferry and Beaver Ferry among them.

Ferries stayed with us where they were needed. But as the highway system progressed and grew, they became obsolete. From time to time one might be called into service to aid an area where a bridge was out or under repair.

Back in the 1970s there were still close to 30 ferries across Arkansas. They’ve all gone away, all but one. That ferry is the Peel Ferry, connecting Highway 125 north of Peel to the same highway on the northern side, just south of Missouri.

The Little Joe tug and Lady Marion barge took people across a midsection of Bull Shoals Lake for generations, up to six cars at a time (eight if they’re small). Marion County purchased the tug and barge and took over the operations in 1968, charging a buck a ride; the state took it over the next year and made it free.

But Little Joe has long since retired. Its replacements, Spring Bank and St. Charles, served at other ferry sites and were moved to Bull Shoals later. But after 150,000 and 182,000 hours respectively, they have been retired.

I ventured to this ferry site 30 miles north of Yellville on June 22nd, 2011 -- the day of the dedication of two new tugs that have effectively replaced the old tugs. Peel 1 and Peel 2 have been purchased at a combined cost of $388,114 -- some $350,000 of it from Federal Stimulus money. Folks from all portions of state government had come out for the dedication… along with ferry staffers… and my photographer and I.

In a way, it seemed like such a judicious occasion required more pomp and circumstances, big banners and hollering stands of people. But quite honestly… Peel’s Ferry is in the middle of nowhere-ville, AR.

Still, that didn’t keep most of us for boarding the Toadsuck Barge and heading across the lake and back for a celebratory ride. The barges? They’re the same barges as before. Toadsuck is a 1956 model; Lady Marion (yes, she’s still in use) is newer, a 1968 selection. I would suspect I know where Toadsuck originated.

As we pulled away from the bank, I talked with Howard Kitchen, one of the many folks who had attended the dedication. Howard works with the Arkansas Highway and Transportation Department. I peppered him with questions about the ferry’s operation.

First thing I had noticed was the platform that sat at the water’s edge on the road. Turns out, that platform is moved up and down with the lake -- and the lake, right now, is about 40 feet above stage. There was a line of trees partially submerged a good way down from the water’s edge. “Now normally, you take the road all the way down to there,” he indicated with his hand. “Right there where that last tree is, right past it.”

“So how often does the ferry go across?” I asked.

“It makes the run in about 45 minutes there and back. Fifteen, twenty minutes across, depending on the water and weight, and then time to unload.”

“It’s not choppy at all out here,” I commented. Indeed, the weather was beautiful; a light wind added to the 84 degree temperature made riding across while standing on the barge kinda comfortable. “So, these are both brand new tugboats?”

“These tugs are a lot bigger and a lot better,” Kitchens said. “The cabs are three times larger, they have air conditioning, they’re operator friendly. They run about 300 horsepower.”

We were about mid-lake already, making very good time. In the distance I could see the other barge and tug at the shoreline. “We’re not far behind.”

“No, we’ll piddle around out here for a little bit while they get loaded.”

“Are there always two ferries running?”

Kitchens shook his head. “No, usually just the one.”

“So the other is backup?”

Marky Grozis, the ferry supervisor, had overheard our conversation and jumped in. “Yes, I mean, you have to have another ferry in case one has a problem. You can’t have traffic stuck on the lake.”

“But why not just build a bridge? Is it an engineering issue?”

Kitchens answered. “It’s a matter of money. You have 60, 80 people a day that cross Bull Shoals here. A bridge’d like to cost $30 million dollars or more.”

“So, is this just local traffic?”

“It’s more people who are wanting to see this free ferry,” Kitchens said.

Grozis explained. “We have folks that ride their motorcycles from Harrison and Branson. I’ve had people call and ask me how they get from old Branson out here.”

“Most people think of a ferry as a temporary thing,” Kitchens said. “They think of it as a way to cross a creek or a river for a short while if a bridge is out or unavailable.”

The other ferry was heading back. My photographer and the guy from the state who was shooting the event leaned out over the side of the railing and shot it as it passed.

“So, before this was a lake, did this highway just go straight across?”

“Yes, there were roads that connected.”

We started pulling up to the far dock. On this side, there was no gateboat, no facility. Kitchens told me there was no staff on the far side. I’d wondered that. I mean, how would someone know if there was a car waiting on this side? The answer is, they don’t know.

“So what do you do if there are thunderstorms,” I asked Grozis.

“Ride it out.” He grinned. I guess you do what you have to do.

“This one’s so much quieter,” Kitchens added. “The other tug, it was so loud you couldn’t carry on a conversation.”

“These do. But later this year, we’re getting two new barges that can hold 12 cars apiece,” said Grozis.

After a moment at the far side, we shoved off again and headed for the other side. Most everyone seemed talked out. The wind had calmed down and the water was less active. The crossing had been pretty quick, only about 15 minutes, and without having to unload and reload we’d end up making our round trip in about 30.

“The trip shaves 20 miles off the drive around the lake,” Grozis told me. “Some of the traffic is folks who are curious.”

“So does the ferry operate all the time, or does it shut down at a certain point?” 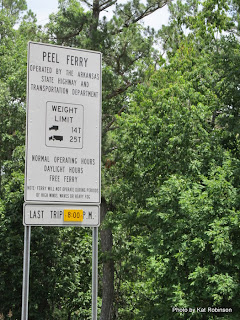 “It runs daylight til dusk, pretty much,” I was told. That made sense. I think it’d scare the tar out of me to make that crossing on a moonless night.

On the other side we all made our salutations and parted ways. I noticed right before I got back to Highway 14 this sign that told people coming on what time the last ferry was set to depart for the day. That's a good thing.