Wood-fired Up: Za Za in the Heights. 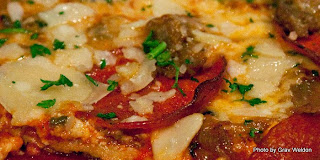 Za Za is a puzzle piece that was missing from the Little Rock landscape for too long. Before the pizzaria-salad-and-gelato shop opened up in the Heights, there really wasn’t a Napoli-style wood-fired pizza available in Central Arkansas. At least, not to my knowledge.

It’s been a couple years since John Beachboard and Scott McGehee came up with Za Za Fine Salad + Wood Fired Pizza Co., the fine little multi-level eatery in the old Heights Theater building. It sprung to life about the time I was getting through my pregnancy and has grown about the same rate as my little girl -- though Hunter hasn’t sprouted a twin in another city (Za Za opened its second location near Hendrix in Conway in 2010). Visits are rare, thanks to my job, but they’re always excellent. 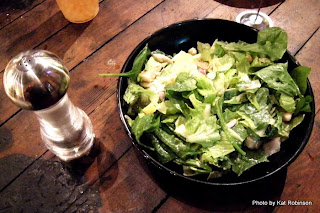 I discovered while I was pregnant that I could not get enough of their Tandoori Chicken Salad, with Yogurt Dill Cucumber sauce and chick peas and mango and the like. Nor could I stay away from the Feta Potato Rosemary pizza… starchy and sweet with those caramelized onions. It was good food at a good time for me. 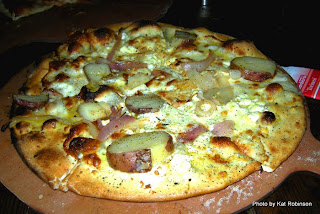 Of course I’ve gone back. Hunter usually digs on the breadsticks -- complimentary, thin rods offered in a big bucket, as many as you like -- which she dips into whatever is being eaten at any particular point.

There is somewhere out in the ether a story I wrote about Za Za’s salads; I’m afraid it’s gone the way of the 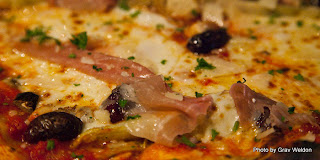 dodo, being eaten by some site upgrade or another. I needed to talk about the pizza, though. A revisit is in order.

I’ve thought a lot about writing specially about Za Za since I was contacted back in February by Serious Eats. An editor for Slice (the pizza lovers’ blog) wanted to know what pizza was available in Arkansas. I was able to tell her all about the biscuit-dough varieties and the cracker-crust version -- and then she asked me about Za Za and I just blubbered along. Yes, we love it. Yes, we’re thankful for having it.

But the idea for writing this piece sat a while. My photographer, Grav Weldon, was recently lamenting that Arkansas has no good pizza, and I just had to correct him on that assumption. I mean, yeah, boy spent years in Chicago amongst some of the best pizzarias in the world. But that doesn’t mean our state’s irredeemable in the pizza realm. 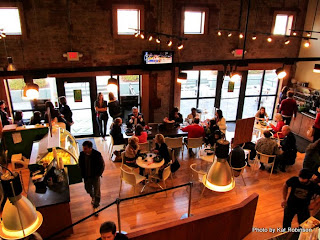 We went on a Wednesday afternoon, catching the tail end of the lunch rush. There was not a free table to be found inside on either level of the place, and there was an extensive line. We decided to split a Quattro Stagioni ($11.75) -- roasted artichoke hearts, prosciutto, black olive and mushrooms on a pie to share. He found a lone table on the balcony above. I grabbed a house blend iced tea. 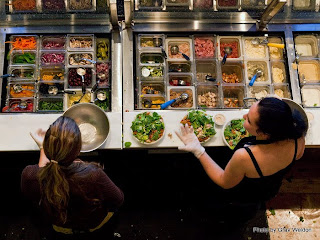 We figured there’s be a wait, but at least there was a show going on below. The glass-enclosed balcony offers a great view right down onto the salad station, where each salad is assembled. There are a dozen salads already on the menu but you also have the option to create your own. As each salad is ordered, an attendant carefully gathers up ingredients in a stainless steel bowl, adding such things as one of a dozen meats, vegetables ranging from carrots to snap peas to corn, fruits like cherry tomatoes and mango and mandarin oranges, all sorts of crazy things. 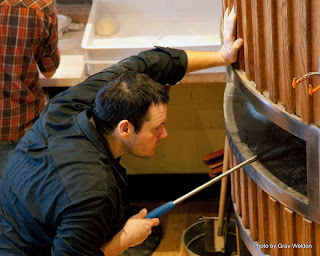 Below and to the east there’s an integrated wood fired pizza oven, and two guys were alternating between assembling the pies and shoving them in and out of the oven with paddles.

One of the guys who was making sure tables were quickly bussed and cleaned also delivered pizzas to tables as they came out of the oven. I counted in my head the trips he made up and down 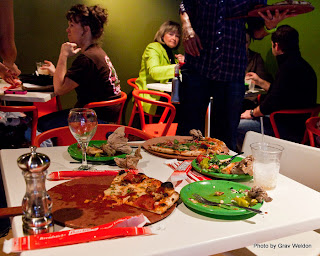 the stairs while we were there -- easily four dozen in that hour -- and marveled at how fit he must be.

The party that was at the table next to us got up and left. I was shocked at the amount of food left behind… it was incomprehensible to me, not only because the food at Za Za is excellent but because there are all sorts of available take-home containers -- pizza bags and salad boxes and sacks and everything else you might need. Why in the world? I suppose they must have been in a position where food storage wasn’t available. I have to admit, I lusted over the remnants of their Zapreme pizza left behind.

At least, until our pie arrived, hot and still bubbling from its three minutes inside the 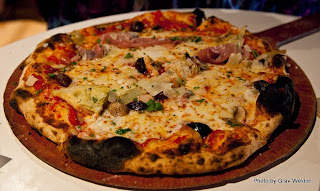 700 degree oven. The scent of roasted artichoke hearts was fantastic. Our host kindly offered “this pie, it usually comes out in quarters with one topping on each section, but the ingredients are all together here. Except the prosciutto, on half.” 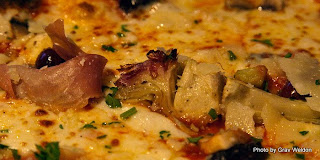 We smiled thanks and pulled out the cameras. He looked amused. We both snapped away the way we always do when there’s something to shoot. It’s our way.

The pizzas aren’t huge -- they come in a single irregular size ranging 12-14” with nice bits of char from the quick heat. This particular day the center was soft, but the edges were nice and crusty and the simple sauce starred. 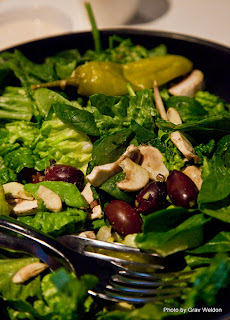 Grav admitted now there was a place he thought the pizza was decent in Arkansas; I guess that will have to do. I adore it, though.

He went down for a salad and came back with a big bowl of green matter with avocados, black olives and such and some Caesar dressing. Make-Your-Own salads start at $5.35 for greens and dressing -- you choose what else goes in, vegetables for 50 cents each and meats individually priced. He was impressed with this, proclaiming this a very good deal for the amount of salad received. I coulda told him that. In fact, I mentioned it before -- in that darn article I can’t seem to locate any more. 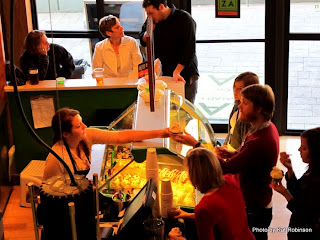 Now, salad and pizza is all good and fine on its own, but the real clincher and the reason people still keep coming back to Za Za is the gelato. There are usually a dozen fresh-made flavors to choose from. Some are seasonal, some are standards. I’ve had many of them - pumpkin pie, dulce de leche, Belgian chocolate, tiramisu and Bananas Foster. 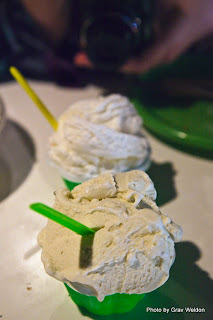 They’re all fabulous… and really, really rich. I warned Grav he should only get a small cup. He went for Sicilian Pistachio, which he immediately commented on as being the least green pistachio cold confection he could remember trying.

I had the Honey Yogurt gelato… and the first bite was like a cold wind in my face, so clear and cold and solidly sour. It was splendid. The local honey drizzled in was just the right amount of sweet to the tartness within. It was a clean and comfortable flavor that is now on my favorites list. 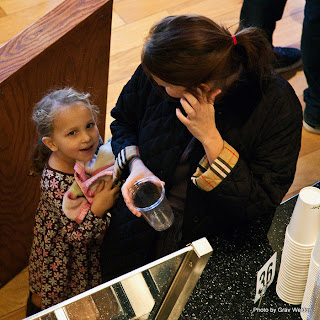 You’d think in the hour we were in there that things would have slacked off. But they didn’t, not really. The salad station would be busy, then the pizza station, then the gelato station. It was like a series of waves. We captured photos of the people passing below -- and a few looked up at the big camera and grinned.

I have yet to go to the Conway Za Za. I should. I need to. But then again, why should I when I have one right here in town?

I could go on, but others have done that and this piece is plenty long as it is. I just suggest if you’re in Little Rock you should give Za Za a try. And let me know when you do -- I might join you for gelato. Seriously, it’s worth a stop in itself.

You’ll find Za Za in the old Heights Theater building at 5600 Kavanaugh. You can call ahead, I suppose, to (501) 661-ZAZA but better yet check out the website and get an idea of what you want before you go. It’s open every day at 10:30 a.m., until nine on the weekdays and ten on the weekends. See ya there.