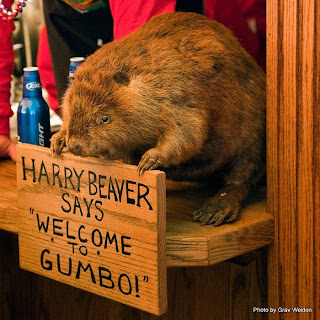 You may have wondered at my lack of diligence this past week. It comes primarily from a weekend incident in the research of the Wings Over The Prairie Festival down in Stuttgart. I’m working ahead on a magazine feature for next year… don’t worry, you’ll hear about it when the time comes.

Thing is, part of the event is Duck Gumbo. I recall hearing a certain redheaded producer colleague of mine talk about Duck Gumbo as if it were a calling, a religious event or a frat party and I never could tell if she were joking or not. I went into it thinking it was a simple competition between culinary sorts. Wow, was I wrong. 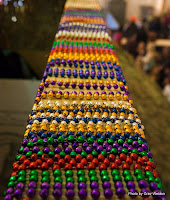 I went in with a busted camera (dang it, after 70,000 shots the old P50 is all but dead) and a notebook and no idea of what I would encounter in the giant tent that took up a football field’s space on the lot of Producers Rice Mill on Highway 165. Identification shown, wristbands applied and Grav and were tossed into the mass of humanity beyond. 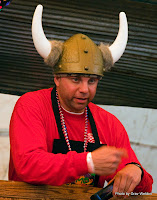 Well, that’s not really right. We went early on, right as the competition began. It’s simple, really -- the competitors each have their own booths, and in those booths they have to come up with a suitable gumbo in just a few hours consisting of half duck and half whatever else they serve up.

But those booths -- now, they’re something else and they consist of everything from a couple of tables and a banner to stories-tall duck blind structures complete with viewing decks on top, often with ladies in skimpy clothes or guys in funny hats throwing beads into the crowd. The creativity in these structures was extreme, and the décor fell between Razorback ultra fandom to duck hunter’s delight to taxidermy havok to… well, anything went. 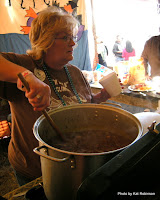 Early on it was very relaxed -- a couple of hundred people flitting in-between the different stands, chatting with others and nibbling on the provided nibbles. There were a lot of these -- lots of cheese and crackers, sausages and such. One booth had quartered pork barbecue sandwiches, another sausage balls and spinach dip, another salami and olive appetizers on skewers, another beef and bean chili. In-between those croissant-wrapped Lil Smokies and cheese balls with Fritos there were competitors hovering over pots, every different sort of color of roux going from deep brown to bright red to pale green. 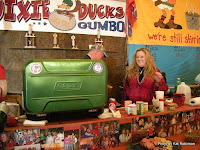 And the scents… the lovely smoky scent of sausage and the wild bite of duck combined with all sorts of things -- okra and celery and tomatoes and bell peppers and onions and spices -- slightly different at each stand but still always with that prevalent scent underneath. Duck was getting its due in those pots.

A gentleman from one booth came up to me with a tissue, which he quickly and quietly tucked into my cleavage. I started to issue a protest but he held up a spray gun of water, shot me at the collarbone with it and pressed something to my chest. “This is your first time here, ain’t it?” he asked me. 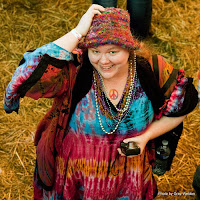 “You stick out like a sore thumb, but that’s okay. You look like a box of Crayons. That’s good.” He pulled away the thing against my chest and pulled the tissue out of my shirt. “What do you think?”

“I hope I got it right side up. You have a good time.”

Well, it was, interesting. The next booth’s purveyor adorned me with beads. I’d been told upon entering that the event was considered “redneck Mardi Gras” but having experienced Mardi Gras I figured it was a bit too light for that.

Or so I thought. I was about three quarters of the way around my survey round, and I got smacked on the butt. I turned around to see a couple of guys laughing.

“Oh, she’s a noob!” one of them laughed. I smiled and moved on, thinking it was a random incident.

It was not. Over the next couple of hours I’d get smacked numerous times. It seemed like some sort of fraternity rite. But instead of leaving just stinging cheeks, these rascals were leaving stickers. A lot of stickers.

And was this frowned upon? Not at all. In fact, many of the local girls (all in the “uniform” of tight jeans, camoflauge shirt or jacket and knee high boots) were showing off their sticker-bedazzled bottoms. I ran into an old friend, Josh Heffington, who had his cell phone out showing off photos from last year’s debaucle. Among the many shots were those of random bottoms plastered from one hip to the other with a smattering of stickers. Apparently it’s a source of pride. 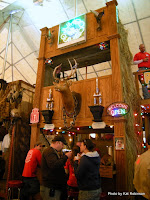 As the afternoon progressed, smoke hung in the air and the crowd packed out. There were even crowds waiting for use of the portable facilities, housed in a connecting tent, a good three dozen of them in constant use. The hired band started playing in-between updates from the Razorback game. There were lines at the liquor stands (the event is 21 and older only). There were groups of older men and groups of teens chewing the fat and having a good time. In many ways it reminded me of a Jimmy Buffett-haze on a beach. The competition in many ways came second -- just a chance to have a booth and make some gumbo while enjoying one hell of a party. 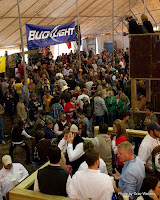 It was getting too tight to take many photos on the ground. Grav managed to talk one of the guys manning a booth near the epicenter of the event into letting him up on the upper platform. He told me later that while it was awesome to be able to shoot down into the crowd, the platform swayed amidst the activity -- and for someone afraid of heights it was quite a challenge to conquer.
There was just one thing that confused us. Duck Gumbo seemed to be a pretty rockin’ event, sure -- 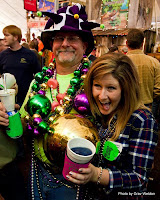 but it overlapped the actual World Championship Duck Calling Competition, which we figured was the main reason everyone was coming to Stuttgart for Wings Over The Prairie anyway. I realized that yes, there were going to be rounds for the competitors in the competition, but there was really no way to be in both places at one time. And we were missing out on that story. 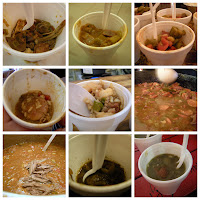 But the allure of Duck Gumbo continued to grow on me. It was coming up on three o’clock, when the cooking was over and the judging would apparently begin. Booth after booth was getting prepared for the big moment. I saw those competition cups go out -- I’m familiar with them from the CASI competition circuit -- and I watched a couple of different booths as they carefully packaged away the judge’s sample of gumbo and sent it off. 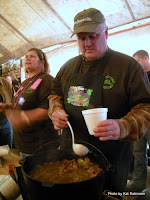 And then the floodgates were open for anyone to have themselves a try. Each participant is required to cook up at least three quarts of gumbo but most of the competitors I saw had made gallons, and they were quite generous with samples. A host of six ounce Styrofoam cups appeared like egrets on Lake Conway, each with its own sample of a different duck gumbo in them. Some included tasso, some andouille, some ham, some pork chops. One included summer sausage and possum -- and the guy at that booth dared me to try it. Without the pork in it, I woulda. 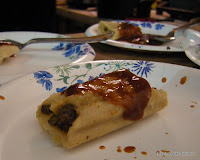 I was sorta disappointed, just because I couldn’t try it. Every single gumbo -- even though all gumbos were supposed to be 50 percent or more duck -- every one of them contained some sort of pork. I was out. Dangit.

It didn’t keep me from sampling other things, though, like the scrumptious duck tamales one contestant had set out. He seemed discouraged that no one was trying them. I did -- they were smoky and wonderful and I was glad I’d sampled them.

The crowd was thickening and the clock was ticking. Grav and I actually were planning to wait until the judges had made their announcements, but overhead we heard a guy on the loudspeaker saying the judging itself wouldn’t begin until 4 p.m. Well, that cinched it. We had to go do something on the other story.

And here’s the part where I realized we had come to Stuttgart with an entirely different idea for a story than we’d actually started out to get. Because while there were a lot of people in downtown Stuttgart, they were in the vendor tents and out in the little carnival at the north end of the stretch of Main Street. There weren’t quite a hundred people standing around watching and listening to the World Championship Duck Calling Competition.

We realized why less than half an hour later. Each competitor has 90 seconds to do five calls. They are, for all intents and purposes, the same five calls. And while I’m somewhat used to duck calls, it about drove Grav out of his head. The idea of sitting through it all was just too much. Besides, we had another assignment to catch that afternoon.

So, what am I telling you? Well, if you go to Wings Over The Prairie, you’ll probably want to spend a few minutes watching the duck calling. You’ll certainly want to check out the vendor booths.

But if you’re an adult and you like “a good time” as it were, you really should be over in the parking lot at Producers Rice Mill under the big tent. It’s an event like no other I’ve ever seen in Arkansas, and it’s definitely something you won’t forget any time soon.
To purchase this article, email Kat Robinson at 12/09/2010 08:57:00 AM