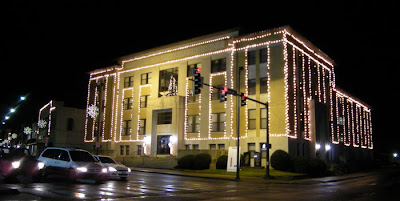 Contrary to my husband’s assertion, I am not a Christmas Nazi. He believes since I manage to haul out the Christmas tree about every other year that I’m obsessed with holiday music, Christmas card exchanges and the best Dirty Santa gift possible. He’s rather wrong about most of that.

I do admit, I love to bake for Christmas and will start in on that the first weekend in December, baking one loaf of banana nut bread after another until everyone in our social circle who wants one has their very own loaf. But I avoid Christmas music to the point of abandoning the stores during the holidays. I’m lucky if I get Christmas cards out each year and can’t remember the last time I was even invited to play Dirty Santa.

My one big joy is Christmas lights. I don’t actually partake of the phenomenom -- me, ladders, the roof and electrical wiring should never mix. But I applaud efforts all around. I also sometime feel a boggle of the mind comparing the daytime appearance of a home to its illuminated glory at night.

Nowhere have I ever seen does quite a great a job as Russellville. From Tanglewood to Skyline there are residents that do their best to share their holiday spirit by creating almost immaculate, imaginative yard decorations. I’ve enjoyed these ever since the early 90s, when I’d find myself delivering pizzas to homes in neighborhoods neatly outlined in luminarias, the oversized colored bulbs on the roofs carefully measured out for the best appearance from the street. In other neighborhoods thousands of lights in different colors would be strung over homes, trees and anything else not expected to be mobile in the month of December.

You think this might have been limited to the more upscale neighborhoods, but some of the finest displays I encountered were in trailer parks and in some of the city’s poorest neighborhoods, efforts by those who were probably spending a bit more on their electric bill that month than their budgets probably should have allowed.

We’ll drive up to Russellville at some point during the season to visit relations and friends and to take Hunter on a twilight drive through the same neighborhoods, to listen to her call out her surprise and wonder. My husband and I will giggle at each other, recalling our courting days in the River Valley town. It’s a family bonding moment I’m looking forward to.

Why, though, are we culturally inclined to love these tiny blinking lights and illuminations of the dark? There is a history of such things… The spread of tract housing in the 1960s seems to have brought the advent of the outdoor home light display -- which means I’ve never known a time when illuminating one’s house with tiny lights wasn’t considered somewhat normal. Eastern Europe saw its share of candle-clad trees (and I’m sure the appropriate number of Christmas tree fires) dating back to the 17th century, and the first electrically-lit Christmas tree appeared in the White House in 1895. But I believe this phenomenom might go back further to something primal, the desire to cluster around light and heat as the winter closes in.

But I digress. As a younger woman it was no weird thing for me and the hubster to drive all over a town looking for light displays -- we had more time than money and all we were spending was 99 cent a gallon gas. Age and parenthood has eaten our time. That’s why I’m thankful for events like the Holiday Trail of Lights -- the statewide effort to light up downtowns and neighborhoods so everyone can enjoy the show. You too can check it out at the Department of Parks and Tourism page. Knowing us, there will be at least one night here in Central Arkansas when we bundle up Hunter, curl up in the van and drive to Burns Park, through downtown Little Rock and up to the State Capitol, just to see the splendor and hear our little girl ooh and ah.
To purchase this article, email Kat Robinson at 12/01/2010 03:24:00 PM