The 'Cue and The Pie. 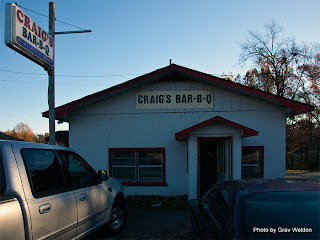 DeValls Bluff has been on the culinary map a long time. A really long time. Now, I know why I go -- for some of Ms. Lena’s Whole Pies. Can’t drive through DeValls Bluff without stopping for a chat with Ms. Viv. That’s just the way things are.

But when I tell people to go to DeValls Bluff, I often get the whole “what, you didn’t stop for Craig’s Barbecue?” And my usual answer is “no.” Pie in my book usually trumps barbecue.

Sometimes, though, you gotta stop and have a bite of something hearty. And one Saturday afternoon after a hard day’s work, Grav and I found ourselves in the general vicinity. And he wanted to check the place out. So we dropped in, middle of the afternoon for a bite to eat. 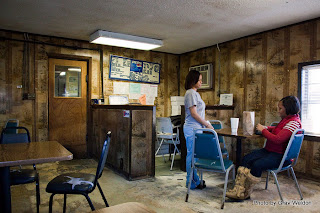 And like most good barbecue joints, Craig’s isn’t a looker. It’s a little whitewashed building on the side of the highway with barely enough parking to spit at. Inside the walls are simple paneling with strange woodland wallpaper strips, the menu’s an ancient letter board on the wall, and the clientele is varied… at least around the lunch hour. We managed to come in when we were the only out-of-towners.

You order at the counter. You just do. You don’t pay, you just tell whoever’s taking your order what you want and you go sit down. She’ll bring you whatever beverage you asked for and disappear in the back of the building, where aromas play in the atmosphere and pans clink and the like.

The thing about that aroma -- it’s somewhat cinnamon scented, not normal for a barbecue joint or sauce in my opinion but that’s what I get out of it. It’s rich, too, but not sweet. I wondered what the sauce would be like.

You don’t go to a barbecue joint to order a cheeseburger -- though there are cheeseburgers on the menu at Craig’s. There are also dinners of beef, pork, chicken, ribs and Polish sausages and of course family packs to take with you. But if you’re hungry from a day of hard work, all you really want to have is a sammich, a BBQ sammich, and here they come in pork ($3.75) and beef ($3.80).

“Mild, medium or hot,” my hostess asked when I asked for that beef sandwich.

She didn’t take any lip from me, just glanced over at Grav.

She grunted and turned on her foot, waving with her hand towards the dining area. We took this as an indication we should sit.

A moment later she came sweeping through the doors with our beverages in hand, plunking them down on the table and attending to a guy who’d come in for a pickup order. Both of us took after our beverages… that hard day’s work having drained us. 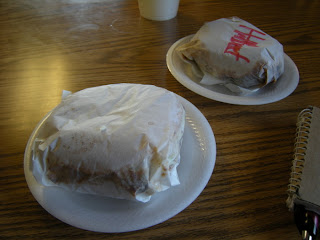 Our hostess started to come out again, but turned in the doorway and started conversing with the guy right behind it. “You sure this is beef?”

He started to answer but I missed that bit as she closed the door again. It wasn’t half 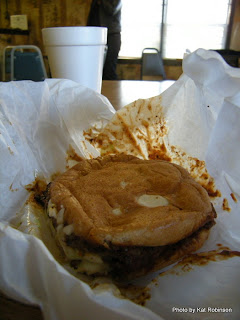 a minute later when she came sweeping back through the door with our sandwiches wrapped in wax paper on little Styrofoam plates. And then she was gone again.

Grav resisted shooting the food at first, hunger being such an overwhelming monster. But we got into what we needed to do and shot our sandwiches. They were messy -- very wet with the sauce and the cole slaw. I was afraid to turn mine over for fear of disintegration. For the most part they were identical in appearance -- the hot sandwich looked darker and had darker edges to the brisket within -- and the hot one smelled of Tabasco and black pepper. 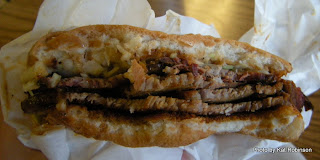 One bite told me a lot. Instead of a chopped beef, this was thinly sliced beef brisket, just thick enough to require teeth but not thick enough to be overly chewy. It came in three layers tucked up underneath a pile of sweet slaw and that bun. It was smoky, perhaps a hickory wood smoke. 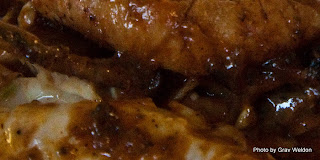 The sauce, though -- you know, I know people who swear by this sauce, who come from states over to pick up a gallon when they’re around (it’s $20 a gallon, in case you’re wondering). And it is indeed a sauce that would be hard to duplicate. Craig’s sauce ditches the 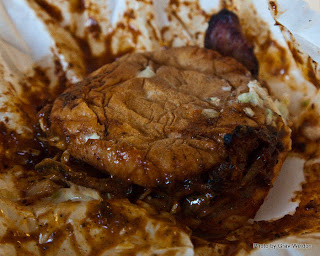 sweet of many regional barbecue joints for a mature, savory sauce spiked with notes of cinnamon and sorghum. I couldn’t tell you for certain what it is, nor would I divulge that secret if I could, but it’s… it’s meaty. Eating a barbecue sandwich at Craig’s feels like eating a hearty meal. It’s a lot of pack to the punch.

We couldn’t stay… we had another appointment down the road. When we were about done with our sandwiches our hostess came back out to us with our check, which we paid up at the table in cash, less than $10 to get us back on the road including the tip left on the table. 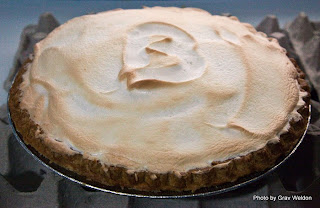 We headed down the road and dropped in on Viv at Ms. Lena’s and took home a couple of pies -- a banana cream pie for me and a chocolate pie for Paul -- his favorite chocolate pie in the world..

So there you go, there really are two reasons to stop in DeValls Bluff. You’ll find Craig’s Barbecue right there on Highway 70 -- one of those “you can’t miss it” sort of places on the south side of the road on the west side of town. Ms. Lena’s is just around the corner a block down the road, turn right on Highway 33 and it’s right there on the left. Couple of places you gotta try.