Breakfast at Ashley's: An Arkansas Tradition 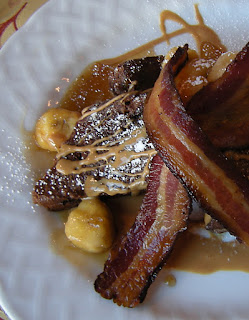 You just can’t include a listing of Arkansas’ best breakfasts without talking about the fabulous Ashley’s at the Capital Hotel. The granddaddy of fine Arkansas breakfasting destinations was closed for a few years, but under the guidance of Chef Lee Richardson it’s retained its previous splendor and grace.

But how has the restaurant managed to pull off a consistently good breakfast year after year? Chef Richardson says a lot of it has to do with ingredients.

“Everything we do at the hotel... both restaurants, all offerings... everything begins with a focus on Arkansas products. Breakfast is probably the best example,” says Richardson. “Even the things that don't originate in Arkansas become Arkansas products by the time they hit the table because just about everything we serve is hand crafted in our kitchen.

“For example, we buy a lot of beef brisket that don't come from Arkansas, but we pickle

them to make corned beef which then becomes a corned beef hash that can't be found anywhere else. We buy flour from War Eagle Mill. From that we make sourdough buckwheat pancakes as well as all of the bread that then becomes toast. Local sorghum is mixed with butter for the toast and we make hundreds of pounds of jam and preserves form every type of fruit that the region has to offer. Just about all of our eggs are locally pastured. Sausage and bacon are both made in house with local heritage pork. Granola is made from War Eagle Oats.”

That’s an impressive list.
Ashley’s has been around a while — but in the past year or so, many other restaurants in the upper tiers have started offering breakfasts as well. But why?
“Maybe it's less expensive to have meetings over breakfast than lunch or dinner. A business meeting can be held over an upscale breakfast and cost a company less than having the same meeting over lunch or dinner.” says Richardson. He continues. “I think it may just be that people are becoming more ‘food aware‘ in terms of where it comes from, how it was raised or grown and the Food Network has got them more interested in the techniques and preparations. I think the simple emergence of more satisfying options has begotten the emergence of more satisfying options. More and more people are caring more and more about the quality of the food that they eat.”

So why are customers still choosing Ashley’s? Maybe it’s something unique. “There is almost nothing at Ashley's that the typical diner can get anywhere else,” says Richardson. “By that I mean, they may be able to get toast and blackberry jam or fig preserves or bagels and cream cheese anywhere else, but because we make our own bread for the toast and because we make the jam, preserves and the bagels, only the cream cheese could actually be experienced anywhere else in the world.

“Similarly our bacon and sausage are unique as is the corned beef hash, but we are definitely the only place around making grits out of rice.”

Will we be seeing changes at Ashley’s? Richardson replies “not really. Our menu is pretty extensive and it pretty much covers all the expected offerings. I find that people are looking to spend some time and be entertained at dinner, generally short on time at lunch. With breakfast, people tend to be a lot more specific about how they want what they want. Eggs are not just poached or fried, but poached hard or medium or soft. Bacon may need to be soft or extra crispy. Rarely will two people's coffee taste the same unless they take it black with no sweetener. Moreover, they arrive much more motivated by hunger and ready to get down to the business of eating than at other meals.

“I've just never felt that breakfast was the time for new and creative ideas. I try to make sure I've just got good eggs, satisfying bacon, freshly squeezed juice and corned beef that doesn't come out of a can; great examples of the things that people already know they want. Brunch, on the other hand, is another story.”

I had the opportunity to spend a morning in the kitchen at Ashley's. It changed my mind about a few things. More here.
To purchase this article, email Kat Robinson at 12/07/2010 08:00:00 PM