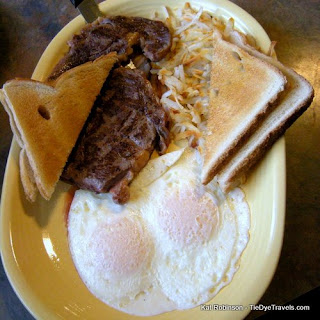 This has been the year of breakfast. Everywhere I’ve gone, breakfast. Everything I’ve thought about, breakfast. Well, maybe not — there’s been bits of Highway 7 and such to consider. There have been so many breakfasts that I’ve even missed out on having, well, breakfast. You’ll find out why next week.

I’ve been meaning to get back to the Jenny Lind Country Cafe ever since Grav dragged me out there back in July for some pie. He’d been telling me about this place his dad frequented and how good the breakfast was, and how he had breakfast and pie together. Sounds good, right? Well, we had our pie, but we didn’t get back for breakfast. 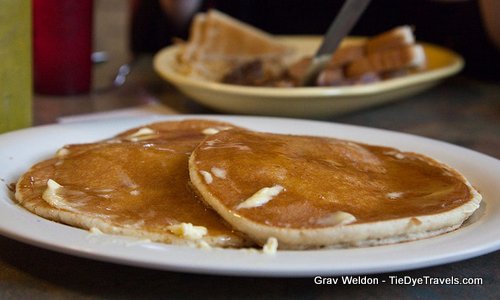 That is until last Saturday morning, on our way from point A to point B. He was nursing a migraine. I was hungry enough to eat almost anything. Almost. Okay, not quite. I wasn’t going to eat anything that didn’t come from a homestyle kitchen. I wanted eggs.

That last statement… well, it’s amazing, considering everything else that’s happened this summer and fall. But it’s true. Me, the girl who was never really that big an egg fan in the first place, wanted some more. Over easy with toast at that. You think the recent drop-in to D’s Restaurant woulda fixed that. It didn’t. 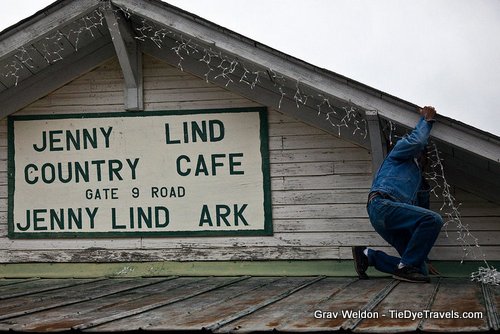 So we headed down US 71 to Old Jenny Lind Loop, turned east on Gate Nine Road and headed past the Arkhola quarry and such. And just past that turn in the road we saw that cute little store on the side of the road, cute as a button. A button. And there was a healthy number of cars in the lot.
We walked in and immediately checked the boards. Grav was instantly heartbroken; once again, there was no Chocolate Joy pie. We found our booth under the westward facing window and had a seat.

Our waitress came over to take our orders, and I couldn’t get the coffee quickly enough. I wanted it more for warmth than anything else; it had been in the 70s Friday but the last bank we’d passed by on the way out said it was 42 degrees, bitterly and surprisingly cold and I’d forgotten my mittens. The coffee came out quick, and it was reheated often, to the point I have no idea how much I consumed. 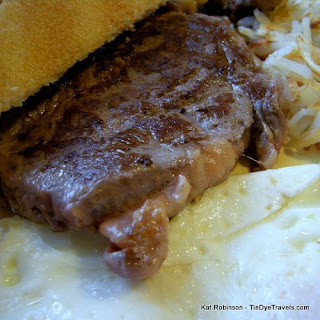 We each knew what we wanted, my decision only made easier by the specials listed on the wipeboard. I went for the Ribeye Steak and Eggs ($10.95). I hadn’t planned to purchase such a big breakfast, but the chill was on and I was hungry. I received an interesting medium rare steak — a little bloody but very tender, a three minute steak (as opposed to a one-minute breakfast steak) with a good strong line of gristle at the edge. It came with typical hash browns, nicely cooked eggs and four wedges of white bread toast. I needed it. The steak was just right on in its seasoning, requiring neither salt nor steak sauce. I did pull out the ketchup on the hash browns, but not too much. The eggs had been seasoned in the pan and required no additional salt. 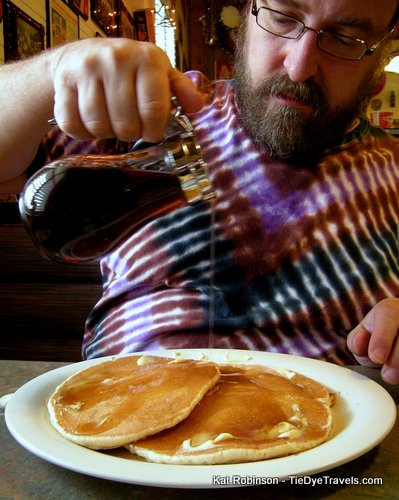 Grav had two plates to conquer. He wanted the solace of pancakes ($2.99 for a short stack of two) to sooth the migraine; at the same time he craved the warmth and comfort of a couple of sausage-gravy laden biscuits (also $2.99). The pancakes were lovely and surprising, real syrup-suckers with a nice thick cornmeal base. More surprisingly was their depth: nearly an inch thick in the center. 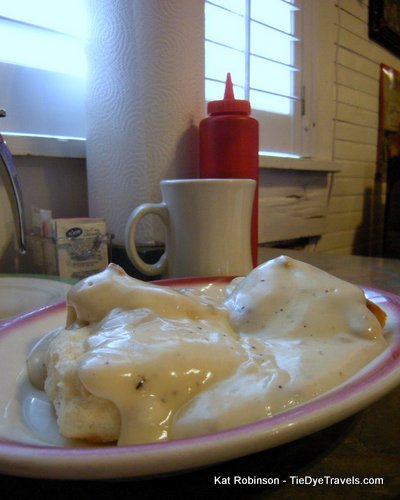 The biscuits, though… I wanted those biscuits so bad. That sausage gravy looked so enticing, smelled salty and wonderful, and I silently cursed my allergy to pork and committed the dish to memory; if ever I had to choose a last meal, this would likely be part of it.
Grav was a good sport about the biscuits, not offering them to me and all.

In the end, we didn’t get pie, too full from our choices to even contemplate it. But as we left we were told about whole pie sales. From what I gathered, the restaurant will start offering whole pies to take home and serve up for whatever at the bargain price of $12 each. That’s an awesome deal. They have all sorts of pies — buttermilk, Chocolate Joy, apple, pecan, sweet potato, pumpkin, Butterfinger… I mean, a heck of a lot of pie. It’s going to be one of those call-and-order-in-advance sort of deals.

Which is why you need the phone number — (479) 996-4940. And the hours — 6 a.m. to 8 p.m. on Thursday and Friday and 6 a.m to 2 p.m. on Saturday and Sunday. And why you really need to go find this place. I’m not kidding, it’s worth it. They’re decorating for Christmas, by the way. It’s worth a drive just to see all the strangeness inside, including the chandelier in the ladies’ room. No, I’m not kidding about that.

And for the record — that, I believe, is the 89th different restaurant where I’ve consumed breakfast this year. Not counting repeats. Geez.
To purchase this article, email Kat Robinson at 11/17/2010 04:00:00 PM