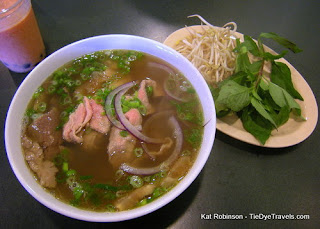 Looking for a lovely bowl of pho in Little Rock?  You'll find it hard to beat the sustaining, savory broth at Pho Thanh My.

I’ve called for a great number of different sorts of restaurants over these past couple of years… and sometimes I find I’ve received what I wanted (still waiting for a good Ethiopian place, by the way). One thing I’ve really been looking for is a place that serves decent pho near my house.

Now I’m not knocking on Van Lang Cuisine; I have a standing request from about six different people to call them when I go to Van Lang. They do some fantastic work. But frankly, I wanted something much closer to my house.

And I have it now. Though… I have to admit, I was startled by just how many other people were awaiting pho in West Little Rock — evidenced by the completely packed parking lot at Pho Thanh My yesterday at 12:30.

We’ve been chatting recently here and there about how the location seems cursed. I actually like New York New York Deli when it was there — those massive 30 inch subs were amazing. I rather enjoyed Albasha Grill, though it was a bit on the pricey side. Both went out within a year.

I ducked my head in there last Thursday and found out the eatery was set for a Monday opening. And as far as I can tell, the notice on Eat Arkansas a few days ago was the only Internet notice that the place was going to open. I wasn’t expecting a crowd. But a substantial crowd filled almost every seat and booth in the Shackleford Road restaurant on that particular day.

That crowd’s probably a good part of the reason why our waitress managed to miss us for 25 minutes after we got there. We had hurriedly chosen our drinks, then our appetizer and menu items… I had enough time to photograph the menu, catch up with the weather, chat with my dining companion about things and clean my camera lens. It wasn’t a lack of work on the part of the people running the restaurant. It would have been busy for a Friday. But this was MONDAY, and it was jamming. 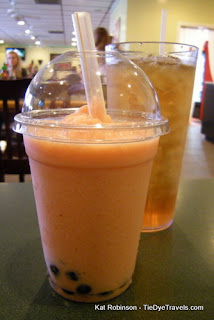 We finally got our orders in, and our drinks arrived very quickly (though the Thai tea my dining companion had asked for wasn’t available). I had chosen at random the Plum bubble tea, thinking it might be something neat. It… well, okay, I am seldom at a loss for words about a dish, but this… I tried it repeatedly and could never quite describe it. I couldn’t make up my mind on whether I liked it or really hated it. It had notes of tamarind, cake batter, plum wine and… well, really, I don’t know. The most familiar flavor was that of the tapioca, and that just seemed odd. I couldn’t get through half of it, it was too weird — but that was probably just from my choice of flavors. 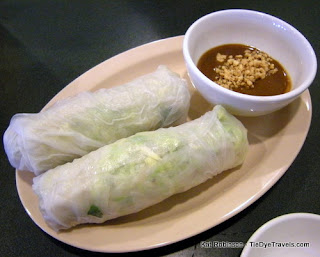 We got the Goi cuon Tofu ($3.50) a couple of long spring rolls packed with lettuce, rice vermicelli, herbs and tofu.

The tofu here hadn’t been sautéed or flavored in another way, and the rolls themselves seemed very salad-like and a little bland. 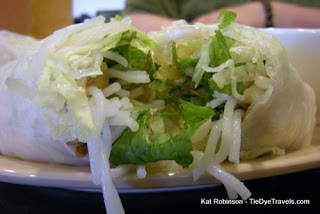 But with the fabulous thick peanut sauce they were served with, they became something else entirely, a splendid fresh and vibrant collection of flavors where cilantro, basil and mint were just as significant as the lettuce. 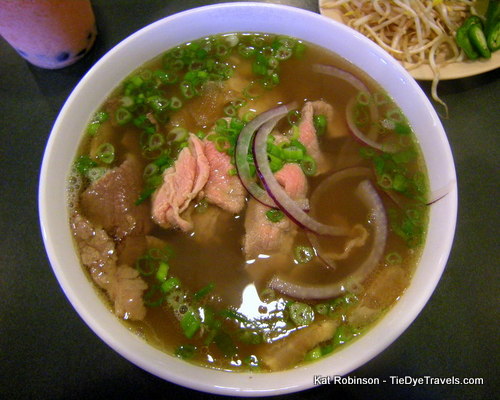 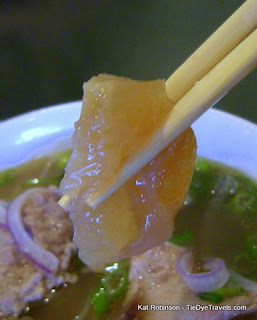 Our entrées arrived separately. My soup came first. I’d ordered the Pho Tai Nam Gan ($6.95 small/$7.95 large), one of eleven pho listed on the menu. Listed as noodle soup with eye round steak, well done brisket and soft tendon, I was expecting about 12 ounces of soup with some meat and noodles — not the seemingly half gallon of liquid and morsels in an enormous bowl delivered to our table. On first glance I saw quite a lot of onions, scallions and brisket floating in a broth, with a side platter containing bean sprouts, cilantro and basil leaves. I stuck my spoon in (the 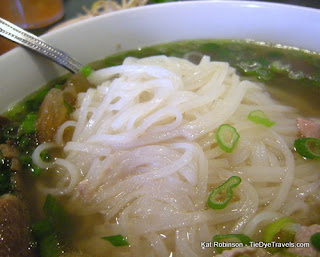 appropriate spoon and chopsticks were delivered a few minutes later) and discovered a submerged island of rice vermicelli that comprised almost a third of the bowl’s contents. 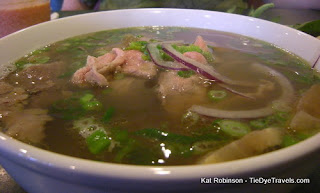 of brisket and chunks of gelatinous “soft tendon” — which reminds me a lot of a strongly solidified aspic. It was fabulously warm and tasty, just salty enough for my taste and delectable with the noodles. The dish just eeked out warmth in such a lovely way. I stirred in some bean sprouts for texture contrast and some fresh powerful basil for flavor. 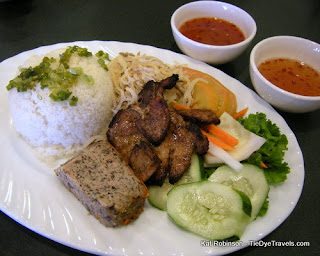 My dining companion's Com Bi Suon Cha ($7.50) was delivered a few minutes later, a selection of meaty and vegetable things with a dome of rice at one end of a platter. The dish was served up with two separate bowls of a condiment that I believe was nuoc cham, a suspension of red peppery bits in a similarly spicy 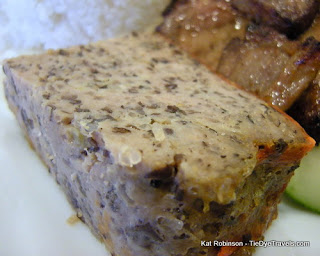 yellowish liquid. I was not brave enough to try it. I couldn’t try most of the rest of the things on his plate, either, since the stars of the show were all pork. He bragged over the pork chop, which came out a lovely orange from being charbroiled. The dish also included a pile of glassy noodles with shreds of pork and what appeared to be a grated cheese; tomatoes, cucumbers, carrots and lettuce and a pork cake — a pork meatloaf containing rice.

My dining companion kept trying this and did eat all of it, but was struck by how odd it was. He told me it tasted more of beef, and that the only piggy bit was the crusty skin-like portion along the top. I wish I could give you a better explanation, but I simply lack the ability to safely digest pork.

I wasn't able to make it even halfway through my pho — the rest came home in a large container. 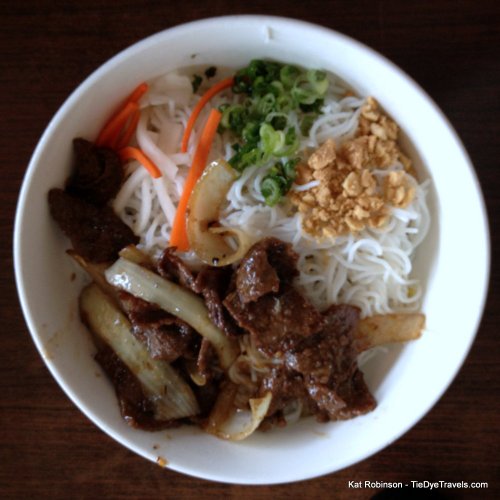 I've been back many times, and enjoyed some of the other items on the menu.  For instance, the Lemongrass Beef is something I like coming back to and sharing with friends.  It's strips of beef and onion that have been sauteed together with lemongrass and other seasonings, served over vermicelli with an assortment of vegetables and peanuts.  It's lively and lovely and very full of flavor.

But yet, when I am feeling punkish and need something to get me going again, it's all about the pho.