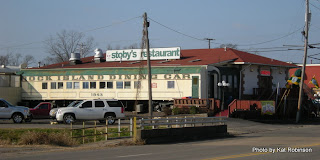 Ah, Stoby’s. I’ve had a 19 year love affair with the place, not for its eponymous cheese dip but for its breakfasts, corned beef and pies.

See, people know the name Stoby’s because of cheese dip… 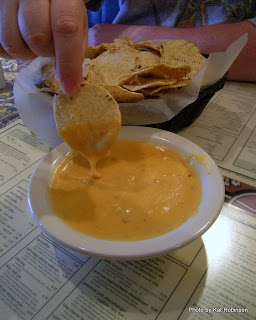 in-state they see it in stores (I recall the hubbub when it went into stores some time back) and out-of-state because of Kris Allen, the American Idol guy who’s the lucky goose for getting that lifetime supply of Stoby’s cheese dip. Stoby’s yellow dip just won second place at the World Cheese Dip Championships. It’s that good.

And I like the dip -- more concisely I like the yellow dip, the white dip’s okay but I can’t get my head around it being Stoby’s dip. But that's not all there is to the restaurant. In fact, there's a lot more than just the Stoby sandwich, too. There's a whole lot of food on the menu. 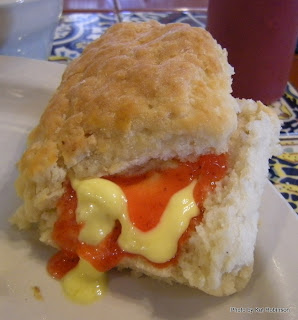 My favorite meal at Stoby's is breakfast. Now, usually I go for The Northerner ($6.49), corned beef hash and two eggs with a biscuit and hash browns. I ate it when I went to school at Arkansas Tech in the early 90s, I ate it when Stoby's opened up briefly while I was living in Jonesboro. And I still eat it sometimes when I can make my way up to Russellville in the morning hours.

But there are other good breakfasts, paired with fabulous biscuits, moist and a little cakey, soft and hot. I could already sing 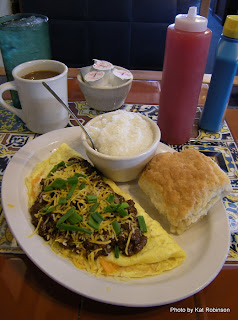 the praises of Stoby's housemade strawberry jam, which comes served up in a squirt bottle for easy application along with a bottle of squirt Parkay. The biscuits are just salty enough to make your mouth water; the jam reminiscent of homemade strawberry compote for shortcakes, that bright red that almost doesn't seem natural.

I like the Ole' Omelette ($5.80). How could you go wrong with Stoby's chili, cheese and such. The chili and the cheese do fine together with the egg, in a stick-to-your-ribs sort of way. Paired up with a hearty bowl of grits, and you have a meal that won't leave you craving lunch. And if you beg really hard, they’ll bring you some cheese dip with it. 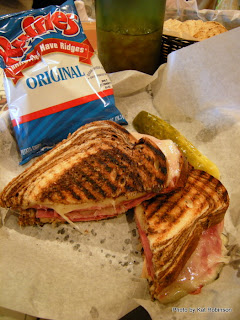 There’s lunch at Stoby’s which often includes the Stoby ($5.65) -- three meats and two cheeses of your choice on the bread of your choice. The Stoby can be just about anything -- ham, turkey, summer sausage, salami or bologna in any combination; American, Swiss, Provolone, Mozzarella, Pepper Jack or Monterrey Jack cheeses; sourdough, rye, wheat bread, pita, bun or croissant for the bread. Because of this it’s really hard to photograph the perfect Stoby.

They do a mean Reuben ($6.55) with sliced corned beef on fresh baked rye bread with the thousand island dressing and kraut. It can be offered with mustard instead. 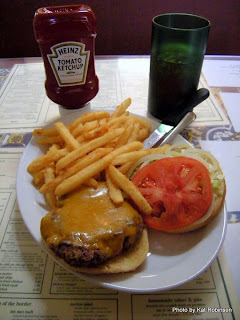 I dig the Hickory Burger ($6.85), which comes with Stoby’s own hickory barbecue sauce and Cheddar cheese and a couple of strips of bacon. I usually get the bacon on the side and let my dining companion du jour have it. Something about that sauce and burger meat just goes together so well. 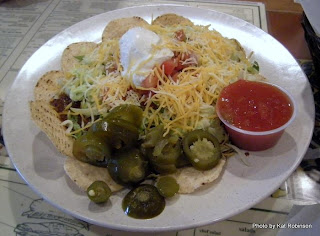 Paul usually goes for the same thing, every single time -- the Stoby’s Nachos, ($5.95) with chili and Cheddar cheese and pico and lettuce and jalapenos served up on those thick yellow chips. 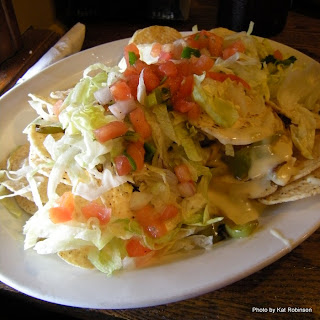 I’ve had both variations now -- you can also have Chicken Fajita Nachos ($6.95) that come with sautéed chicken, bell peppers, onions and tomatoes and the spicy white cheese dip on those chips. They’re both pretty good. 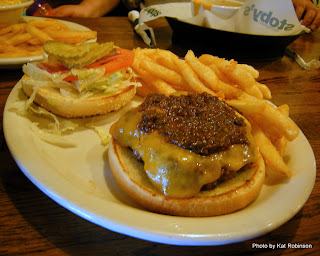 But Paul's also been known to go for a burger, and if he does the burger he gets the super-hot Jamaican Jerk Cheeseburger ($6.85) with its hot Jamaican Jerk sauce. You can almost see the steam rising from his ears when he eats it. 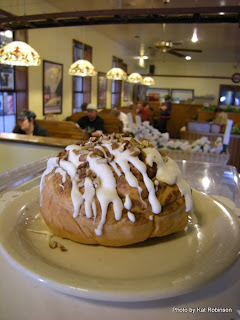 There are the pastries, too -- especially the Colossal cinnamon rolls ($1.85) for breakfast. They‘re not always available -- if there‘s a rush on them early in the morning you‘re going to miss out. They‘re fresh baked confections of rolled dough and cinnamon, topped with a gooey frosting and pecans. And they are to die for. 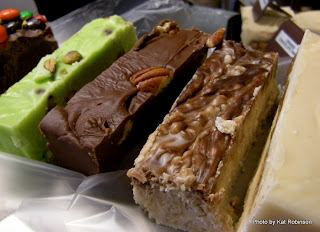 Of course, Stoby’s isn’t just Stoby’s any more. It’s also PattiCakes Bakery -- both the Conway and Russellville locations have PattiCakes sitting across the parking lot. It’s named after Patti, David Stobaugh’s wife -- that’s the owner of Stoby’s, in case you weren’t aware. And their fudge is to die for. I’m a huge fan of pistachio nut. They also do doughnuts -- and the 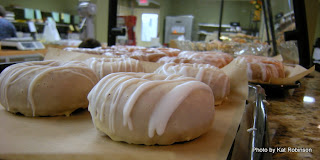 Red Velvet cake doughnuts? Aw, man. PattiCakes does those baked goods for Stoby’s like the buttery huge croissants. Right there. That’s it.

You know, I still prefer the Russellville location, even 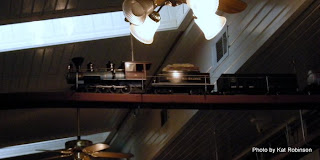 though I’m closer to the Conway store living in Little Rock. It’s that whole college-age nostalgia going on there. I like getting a booth and watching the trains pass overhead. So does my daughter. 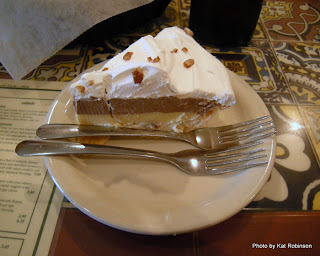 And I'd be remiss if I didn't mention the Possum Pie. PattiCakes provides a lot of desserts to the stores, including a nice selection of cakes and several pies. Possum Pie is my favorite -- with its layers of chocolate, sour cream/cream cheese and whipped cream. It's tart and chocolate all in one, my favorite.

You'll find the Russellville Stoby's on Parkway (wow, seems weird not to call it "D Street") a block west of Arkansas. In Conway, it's on Donaghey north of UCA. Oh, heck, just go look at the website.