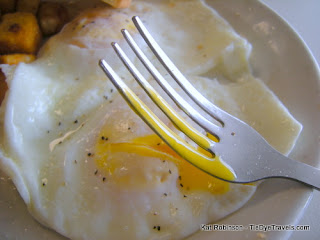 Alma and Van Buren both have a D's Restaurant, a great place to catch breakfast and a cuppa joe. Here's the experience Grav and I had on a November morning at the Alma location.

I’m just starting to get back into having the desire to eat breakfast. And it’s just strange things, too. Like the other day, wanting nothing more than over easy eggs and toast for sopping. We all have strange cravings every once in a while; that one’s not too bad.

This sort of craving struck me on a trip up to Monte Ne. Grav and I stopped in at Alma to give this place his dad found a shot. 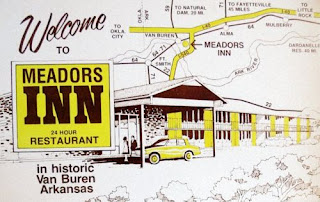 It’s a small hotel-based restaurant at the Meadors Motel called D’s Family Restaurant. It’s one of those old-style hotel restaurants, a one-stop place for people who need a night’s sleep and a good breakfast to get them on the road the next day. There are actually two Meadors Motels, and two D's Family Restaurants.  The other is in Van Buren, and they've both been around quite a long time.

We weren’t hugely hungry, but sustenance needed to be obtained before the work of the day could begin, so when our waitress handed us the menus we flipped through for the breakfast. D’s also offers lunches and dinners. 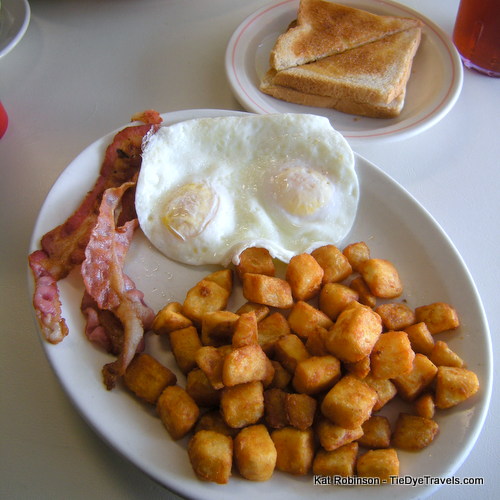 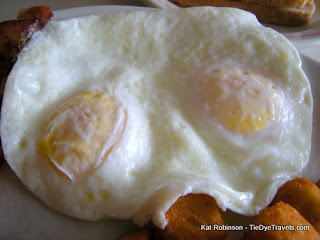 I found my eggs and toast — along with a choice of breakfast meat and potatoes, for $4.99. Grav agreed he’d take some bacon off my hands, so I ordered it. Our waitress gave us a choice of seasoned fried potatoes or hash browns with our meals and I went with the former. 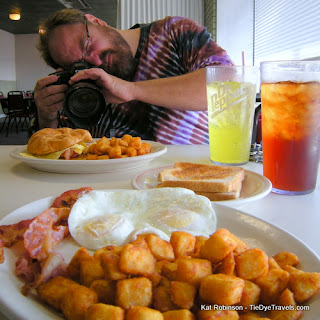 It took almost no time at all to get our plates — just enough time for Grav to fetch the camera he’d forgotten in the car. We’d seen the photos of food on the menu — and our plates accurately reflected those photos. My eggs? Perfect — then again, they should be, any good cook can do eggs well.

The toast was crispy and I had pretty much exactly what I wanted, some egg yolk sop. I know, cholesterol, fat, all those things we’re not supposed to have. I didn’t care — this was done well. 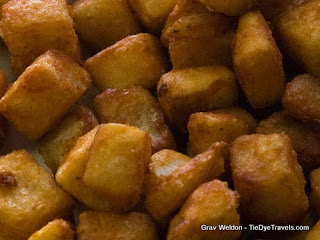 But what was done better were the seasoned fried potatoes. I was expecting home fries, likely a bit greasy and potentially with some skins still on. What we got (we both ordered them) were crispy cubes of potato. They were soft inside, which tells me they’d been parboiled first before being dusted with flour 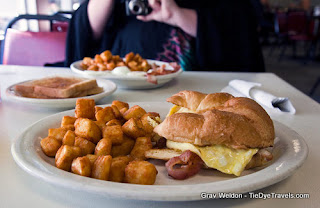 and fried. They were somehow irresistible on this particular day.

Grav had chosen the D’s Croissant and it had come packed with bacon, a LOT of bacon, along with cheese and egg on a five inch wide croissant. It was pretty substantial. 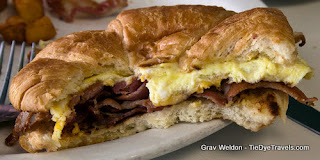 It’s not a whole lot to judge a menu off of, I realize. We passed up on the lunch buffet that was being served just to eat this breakfast. But our waitress was attentive, the food was good and the crowd (mostly older folks from the area) was talkative. 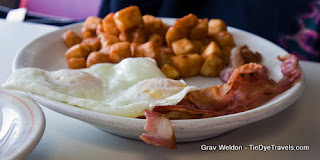 D’s Family Restaurant is tucked into the Meadors Motel at Alma, Exit 13 off I-40. Coming from this direction, you’ll make a right onto Highway 71 and another right onto Collum Lane. It’s on the right. And it’s open from 5:30 in the morning until eight every evening, every night of the week. I’m going to have to go back and try the dinner specials now. (479) 632-1014.