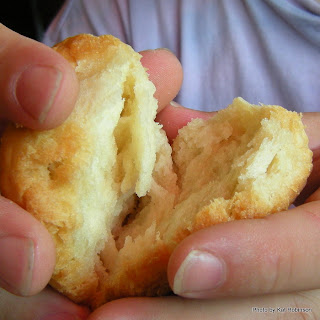 After the night at The Hub and Grav’s descent into Dogpatch USA the following morning, we found ourselves staring at 10am hungry and ready to get back to work. I had a tip to follow up on and needed to go find breakfast back at the Ozark Café.

The crowd was just as hearty at ten in the morning as it was in the just-after-noontime hour. The same booth we’d occupied the day before was waiting for us. 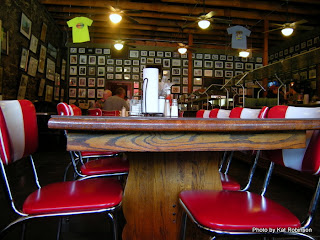 I’d already decided on my breakfast before we’d headed up the highway. I was going to tackle the Ozark French Toast ($5.49), reported to me by Jasper-returning readers as the thing to get for breakfast in town. Grav wasn’t so certain. All he knew was that after the hike down into, around, and back up the hill from Dogpatch was that he needed hydration in a bad way. 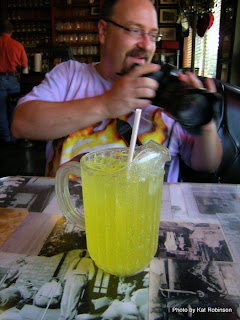 “Ma’am, I’ll drink as many Mountain Dews as you can bring,” he told the waitress when she came to take our drink orders. I asked for my usual unsweetened iced tea and she disappeared, grinning. We looked over the newspaper-borne menus and salivated a bit.

I knew we had a good one when she plopped a whole pitcher of Mountain Dew down in front of Grav with a straw in it. That was worth an extra dollar’s tip for certain. 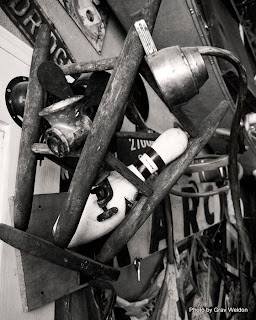 We hemmed and hawed over what Grav was going to try. Our conversation that morning on the way down from Marble Falls had been all about breakfasts in Arkansas and what constituted a true Arkansas breakfast -- and chocolate gravy had come up. Now, I have to admit that I didn’t have my first serving of chocolate gravy until I was an adult -- and even then it was in Missouri, not in Arkansas. But readers had been naming chocolate gravy as something purely Arkansawyer. Seeing it on the menu ($4.49) just sparked our curiosity more, and Grav (who’d never had it) decided it was a good day for experimentation. 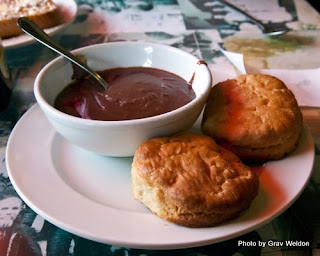 Our food didn’t take long to prepare, and I think he was a bit surprised when out came this big bowl of what appeared to be chocolate pudding and a couple of biscuits. The biscuits themselves were flaky on the inside but had a nice strongly buttery sheen about them, almost a coating of it, as if someone had thought about frying them long and hard before deciding to thrown them in the oven instead.

And that chocolate gravy? Well, it was chocolate pudding, and then again it wasn’t. There was something to the consistency that reminded us both of Jello-brand, but there was also a flavor of flour and butter-rue and salt to it. And it wasn’t half bad. In fact, for what it was, it was quite tasty. It’d take us three more months and dozens more breakfasts before both of us could safely conclude that we weren’t fans of chocolate gravy -- but that we could both tolerate it. 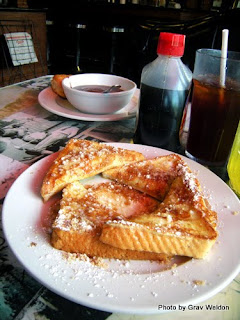 But I was going to tell you about this Ozark French Toast. It was… good. It was four slices of Texas toast that had been lightly battered, skillet-fried in butter and drizzled with caramel and powdered sugar. It was served with a side of Log Cabin maple-flavored corn syrup, but we couldn’t divine why -- the simple little dish was just perfect, custardy and sweet and didn’t need a thing. Buttery.

I wouldn’t realize until a few weeks later when I was looking at the photos that there wasn’t a single damn pecan on the whole thing… and it had been advertised as being covered with them. Well, I guess it’s all right. But if you go back, go demand some pecans. You deserve them. 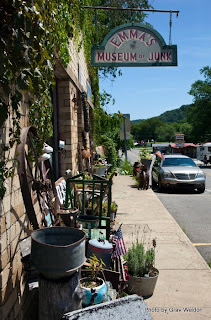 Following our morning repast, we went back on the square to look around and do some shooting and visiting. One of our first stops was in the Chamber of Commerce shop. Jasper’s the only place I know of that has an entirely volunteer CoC, and it’s funded with the proceeds from the consignment shop slash visitors center on the square.

From there we went to Emma’s Museum of Junk, a block off the main square and so odd it always attracts eyes. Grav having never been before, I shooed him into the oddness.

Emma’s is something truly Ozarkian. 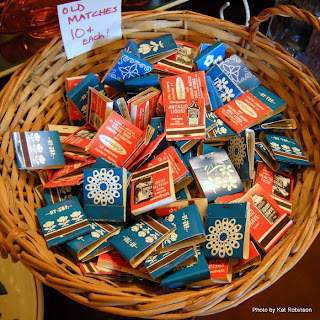 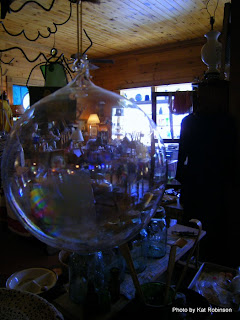 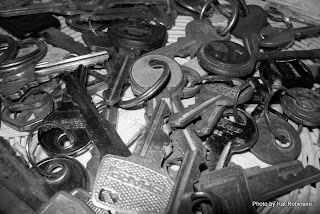 After wandering a bit more and discovering the still functioning but ancient city jail and an old abandoned movie theater, we took off for higher elevations once more, still searching out those almost fabled riders that were alleged to have brought back this little burg in the hills. We headed south.