Something different for lunch at Cafe Bossa Nova. 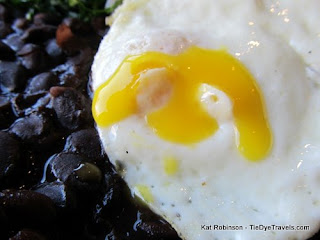 Brazillian cuisine is a far cry from the gravy and biscuits and skillet-frying of Southern culture. It has its own comforts, though, and Cafe Bossa Nova serves them up nicely.

EDIT 1/4/2018: This piece differs greatly from its predecessor, with new information added throughout.

Many times I've found myself ducking in for a relaxed lunch or dinner or dessert since this place opened in the early 00s. From the moment I first darkened the door I've known Cafe Bossa Nova as a place where I can get an extraordinary cup of tea and a delicious meal to boot. 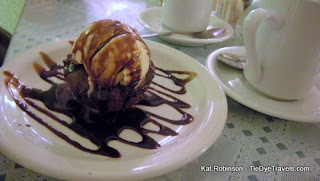 For instance, the very first time Hunter's dad and I went out after she was born... after taking in an excellent production of "It's A Wonderful Life" at the Rep, the hubster and I found ourselves looking for a relaxing non-alcoholic (read:  sweet) nightcap to share before 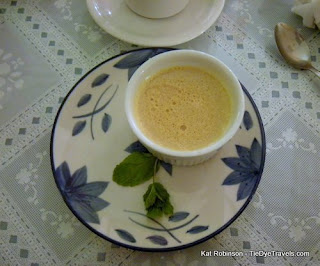 heading back home.  We found ourselves wandering Kavanaugh and fell into Cafe Bossa Nova, where we dined on creamy hot chocolate and rich desserts, including this fine hot-and-cold Gateau Moka, a crisp chocolate brownie with a cinnamon undertaste topped with ice cream - and a lovely creme brulee.

There was also the time the hubster and the girl child were with me, having gone through the processing here and there for passports and such. Hunter was close to showing out from hunger, and I could understand that. I wanted something refreshing, and the thought of another hamburger lunch was just too much.

So we pulled into Café Bossa Nova, about 2:30 that particular afternoon in the lull that finds many restaurants closed for the break before dinner. The restaurant was empty save for a gentleman eating lunch at the counter. Our kind host offered us a booth and a booster chair and left us with menus and beverages. 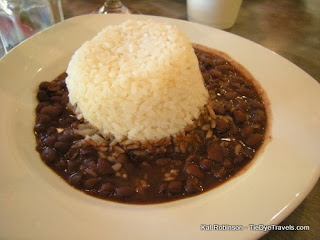 The kids menu was of interest to me. I’m sure many parents would have ordered up the Octopus Dog with Mac and Cheese right off the bat, or the chicken fingers or even the ham and cheese Panini. I like to expose Hunter to adult foods, though, so I set her up with the kids portion of Beans and Rice ($4.95). 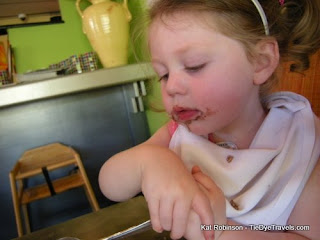 When our orders arrived and while I was shooting everything she was giving the big bowl funny looks, but the moment I let her loose with a fork she was onto those beans, scooping up one forkful after another and amazingly getting most in her mouth. At nearly 23 months, that’s one heck of a feat.

I was fully expecting her to turn to me and ask for some of my meal, but instead she doggedly went after every bean she could manage, turning the bowl so she could get at more of them. She turned her nose up at trying almost anything else. It was as if she were telling us “why haven’t you ever fed me this before?” 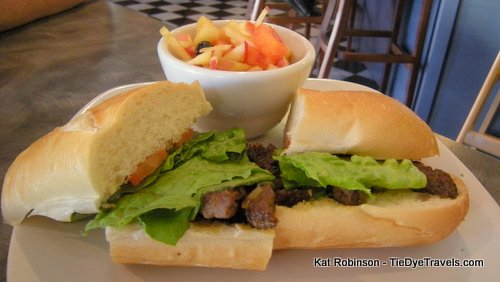 Paul had gone for a sandwich, the Carne ($12.25), not very adventurous as far as I was concerned but feeding the grumpy bear was far more important than getting him to try something new. Those strips of beef were seasoned well, and they tasted like a good example of fajita strips — but a moment after trying one the evidence of heat started to build. The plate came with his choice of a couple of salads; he went for the fruit salad, a bowl of apple shards, blood orange pieces and blueberries that tasted very different from the fruit salads we’re used to. 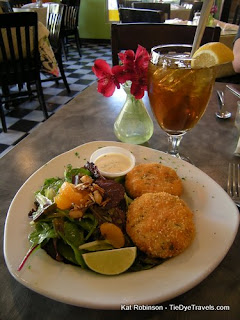 Me? Well, fish sounded very good, so I went for the Bolos de Salmao ($13.95). The two firm salmon cakes were lightly dusted; inside they were packed thoroughly with salmon with tiny shards of rice and cheese. The salmon tasted as if it might have been lightly poached before being added to the mix. All I could really taste was the excellent fish, and that was fine. The aioli (called a Brazilian tartar sauce on the menu) was a very light creamy mayo with parsley and a little dill in the flavor. The two cakes were served up with the mista salad, baby greens tossed in the restaurant’s sweet house dressing and adorned with mandarin 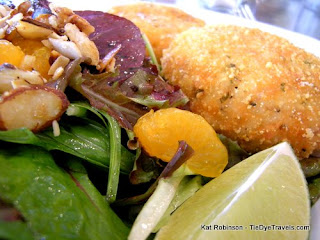 We’d had a great time watching Hunter go after the beans and rice — and though she couldn’t eat but half of the bowl I doubt I would have done much better. I found myself sneaking a few bites of her beans, too. She didn’t seem to mind.

And then, well, I had to have dessert. 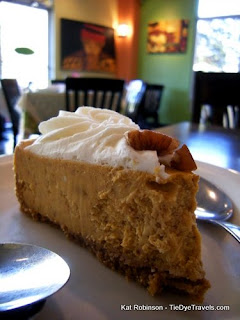 I’d been craving the Moka Gateau but it wasn’t ready, so we settled on sharing a single slice of Pumpkin Cheesecake… a tiny slice, but really no more than we needed. That cheesecake is better than almost every pumpkin pie I’ve ever had, almost mousse-like in consistency, lovely whipped top, rich tones of pumpkin pie spice all the way through and an inoffensively flavorful crust. Just enough for us.

We walked out feeling refreshed, not dragging from another heavy meal. That was nice. I mean, there’s a time and a place for a heavy meal, and this was not it. The perfect autumn afternoon was like an after-dinner mint. Lovely. 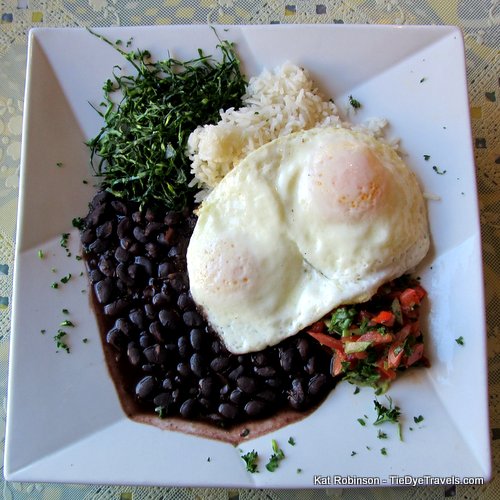 This is mineiro, and it's the dish I am just always going to want. It is, essentially, black beans and rice with eggs on top, pico and finely chopped kale. I usually ignore the kale.

I discovered it on our most recent foray to Cafe Bossa Nova. Grav and I grabbed a quick lunch there, somewhere quiet and cool. This really wasn't the dish to keep me quiet or cool, but it was absolutely perfect. 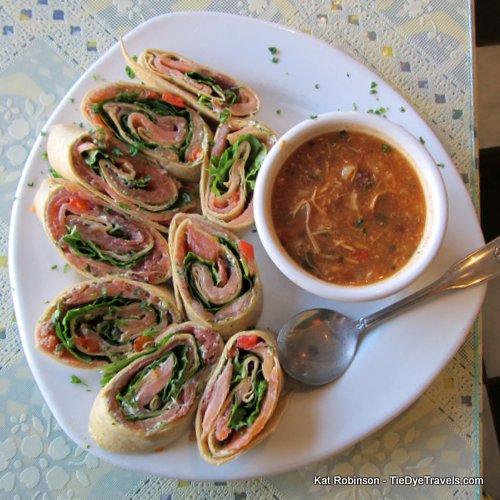 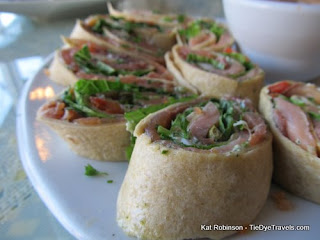 Grav, on the other hand, went for the smoked salmon wrap, which came with a cup of really rich chicken and tomato soup, The salmon was lightly smoked and rolled into a whole wheat wrap that had been smeared with cream cheese, capers and pine nuts. A little tomato, a little green leaf lettuce, and hey - handy bites of savory goodness.

We decided on this day to give a dessert that isn't pie a try. Grav's very much into chocolate, so we got the cake. This is what we got. 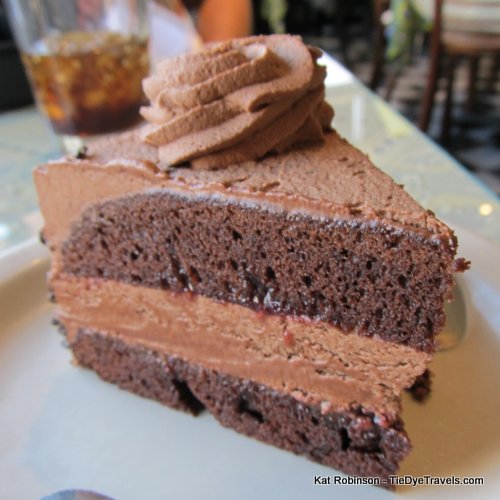 Having Rosalia's Bakery next door has been a fabulous touch for a restaurant that was already doing pretty well. Rosalia now has the room and the staff to concentrate on the magnificent desserts Cafe Bossa Nova has always hinted at.

That being said, this cake... this cake was extraordinary, with a very, very fluffy but rich frosting and an almost airy deep chocolate cake.

I think after this meal, Grav's now a convert.

Did you know Cafe Bossa Nova has possum pie? No, really.  Dropping in the other day for a photo shoot with a new friend, I found a strange new delight. 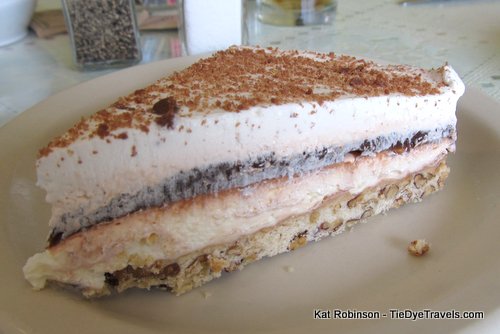 How awesome is it to have a conversation about possum pie and have a piece of possum pie at the same time? Cafe Bossa Nova's four layer delight has at its base a sandy bottom (flour, butter and pecan crust), a cream cheese layer, a chocolate layer and a whipped cream layer on top. The only two differenes between this and a regular possum pie is the cocoa dusted on top and the name. 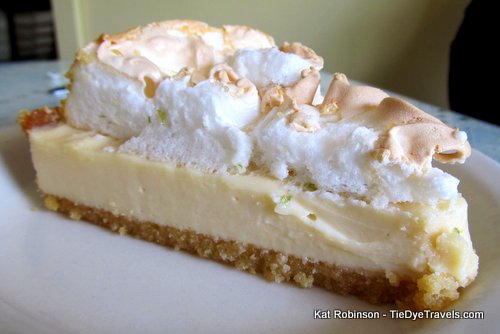 It's an absolutely divine slice of pie, but as you can imagine, Rosalia has even better pies in her arsenal. Case in point - this lemon meringue pie, with a crisp and clean cut custard and a floofy, caramelized meringue top. Even on a dense bed of graham cracker crust, the lemon shines purely and without reservation. It is lick-the-plate good.