On the subject of fried bologna: Southfork Restaurant

There are a certain number of dishes I consider to be native to south Arkansas. Most of these never grace a menu at a restaurant — sugared rice, tomato slices, mac-and-tomatoes, butter beans (not lima beans in butter), pintos-and-ham, yellow corn cakes, collard greens, apple smack (baked apples in cinnamon without a crust), blackberries and sweetened condensed milk, bream fillets and fried bologna.

That latter item — you can find certain places. My friend Jerry rants and raves about the inch-thick slice on the fried bologna sandwich at Whatta-Burger. But not a whole lot of places. Jerry grew up around Glenwood, so I can see how that might influence his choice there. It’s just a south Arkansas thing, and it’s ingrained in us (such as the desire to consume every deviled egg at a gathering, just happens).

There is a place that does carry a certain south Arkansas meal, though, that I think should be pointed out, even if it is a truck stop. That place is the Southfork Restaurant.It’s on the Gurdon exit heading south towards Texarkana on I-30. And there’s a particular meal there that just hollers that particular area of culture at it, if you’re willing to listen.

See, fried bologna is not haute cuisine. You’re never going to see it on the menu at a five star restaurant. You’re not going to find it served alongside filet mignon or lobster, and if you’re lucky you won’t find it as a surprise at an Iron Chef competition. Some folks eat it, others serve it up to family members, and there are a few who use it as fish bait. It is a food of the people, particularly the ones who wear their collars blue, and with a little dirt on them.

It’s not a sandwich meat, it’s a meat category on its own, just like Spam. Similarly, it can be served at any meal. Bologna and egg scramble is popular, as is bologna and biscuits. At lunch served in a sandwich cold, sure, but at dinner in huge hunks in the mac and cheese or in the sauerkraut. Yay bologna. 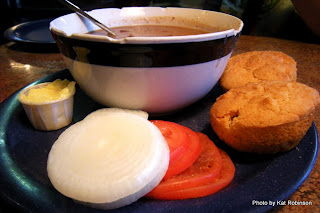 Thing is, just like other usually pork-based products, I haven’t imbibed in bologna in a long time. I’ve also passed up on those pintos and ham, too, since I don’t want a dietary rupture or other nastiness unfit to be recounted on a food blog. That’s why I stared long and hard at the menu at Southfork Restaurant one Friday afternoon. Grav and I had stopped on our way somewhere else. I’d missed out on the other meals of the day and another hour’s drive or more without refueling would just make things tougher on us both. He was taking care of other business in the attached gas station while I gawked at the menu. And I kept seeing bologna all over the place. Surrounded by the familiar patter of soft rhythmic voices in the restaurant, I felt a centering, a question coming on.

I looked straight at my waitress as she returned with an iced tea. “How’s the bologna?” I asked.

“I just wondered,” I asked, my eyes already starting to scan elsewhere on the menu for a Reuben or a bowl of chicken and dumplings. “I can’t have it.”

“You can’t have some beef bologna?” she asked.

I stopped. It had been so long since I’d had bologna, I couldn’t rightly recall my last encounter. Lunchmeat just isn’t found at my house, much less combination meats such as bologna, the occasional turkey pepperoni not withstanding. “I… don’t know,” I answered, thinking.

“I’ll give you a minute,” she said as she saw Grav coming down the way. He sat down and picked up the menu.

“Breakfast,” I answered, and got an immediate weary look.

“Actually, breakfast is the only thing I’ve ever had here. Good cornmeal pancakes. Good coffee.”

“So what are you going to get?”

He stopped, looked at me over his glasses. “You’re going to eat bologna.”

“Yeah, well…” I was staring at the menu item. Fried bologna… burned, as it should be. It came with pintos and ham and cornbread and fried potatoes. At that moment I could not think of a more south Arkansas dish.

“Will you eat the beans?”

Our waitress came back and took my order. We chatted about the south Arkansas patter and the randomness of things while we waited. 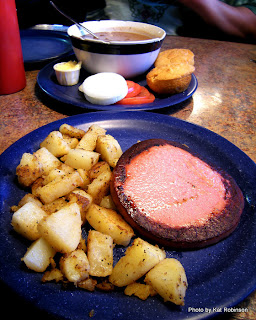 The platter came out on two dishes — one with the fried bologna and potatoes, one with a rather large bowl of beans, cornbread, onions and tomatoes. And margarine. I was giddy. I think Grav thought I’d lost my mind.

I didn't wait at all. I just cut a piece of the thick slice of bologna and ate it. And for a moment, I was eight years old. It was almost crustily burned on the edges, and warm in the center, and it tasted… like only bologna can. Part of me was repulsed. Part of me felt guilty.

The potatoes, once I tried them, were the same sort of skillet potatoes you get out of a big piece of cast iron on the stove, but different — obviously (and quite rightly so) cooked in vegetable oil instead of pork fat. But tasty to me. 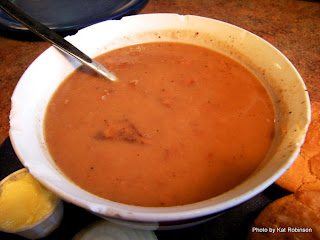 Grav kept shooting the beans. And shooting them. And shooting them. In fact, I should be using his photos but I’ve worked him way too hard this week. Those beans, and their dangerous little lumps of pork meat, all served up in that fantastically chipped-edge bowl. And I couldn’t try them. But they smelled great.

I did reach over and grab a cornmeal roll. Just like I expected, it was unsweetened, crumbly and a little dry — sort of like a good cornbread memory. Buttered it was great. Buttered with a piece of that fresh onion on it, and yeah, I was all about the experience.

I was a glutton. I ate the tomatoes. I ate a bit more of the onion (but not all of it — traveling in a confined space, it woulda been rude). And I ate every bit of that slice of bologna. 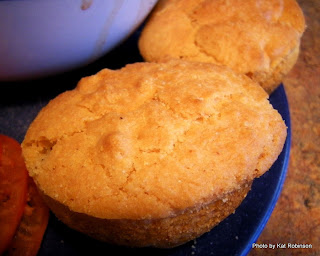 So, part of my regular diet from here on out? No. Not in the least. We weren’t ten miles down the road before the whole “what the hell did I just do?” cropped up in my mind. Bologna, beef or not, worse than potato chips or candy bars, just utter junky food. But for that moment, it was oh so good.

There was, of course, the entry for bologna and eggs on the menu, and I had considered that (before Grav’s weary look) and I probably woulda had a similar experience. And maybe next time I head back that direction I’ll give it a shot. Probably. Who knows?