Scenic Seven Survives IV: Down into the Dogpatch. 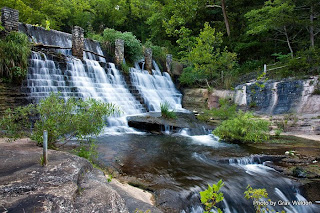 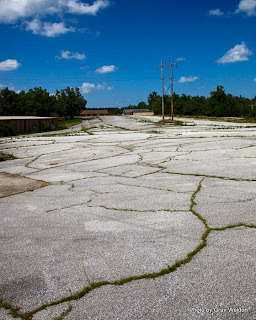 When I was in college at Arkansas Tech University in the early 90s, I often made the run north, sometimes alone but usually with the man who would later become my husband in tow. The curves and hills were exciting for a 19 year old to take right at the speed limit, and the places to stop were plenty.

There were all sorts of places along the route, from the aforementioned Booger Hollow to a particular stop at the top of one of the better vistas, where the mileage to cities all across Arkansas and the U.S. were carefully painted onto the side of a building and where tourists stopped to get their photos taken. 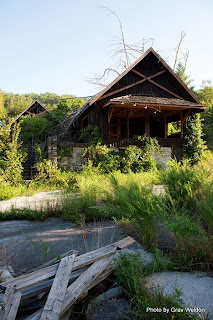 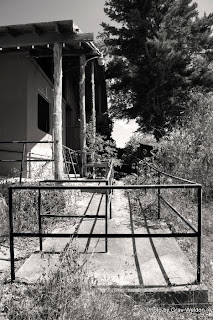 We’d head to Dogpatch, and even then it was just a matter of time. The park I’d grown up loving to visit with family had gone from its former glory I last experienced in full back on Labor Day 1990 with my mother, stepfather and brother to little more than a swap meet with amusement park rides. The top of the hill had been shuttered off and trams no longer ran; instead, you drove directly into the park and found a place to leave the car, then headed from one booth or building to another. The games were mostly gone, and little was left open save the small amusement area and the old mill and the fudge shop that I adored so much. 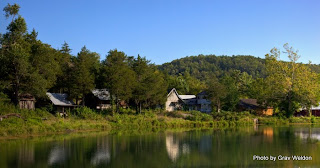 The park was closed for good by the time I graduated in 1995, and I rarely found myself passing that way. I recall it going up for sale on eBay in the early oughts (00s) for a cool million, all that land and buildings, but it was some time before I went there again.
In May 2008 I was passing through researching what has become this article and which might one day become a book -- and noticed that someone had recently come through and re-roofed a good number of the original buildings with gleaming silver tin. But the “Keep Out” and “No Trespassing” signs and my pregnancy were enough to keep my curiosity at bay.

Two years later, and Grav and I were looking down on the ruins from Scenic Seven at the site where Arkansas’ stone for the Washington Monument was cut. He’d never been to Dogpatch, and though I’d told him tales I’m not quite sure he was prepared for what he saw. It is an eerie sight, the strange desolation below, veined with asphalt broken by weeds and wear, the sign for the attraction itself now even gone. 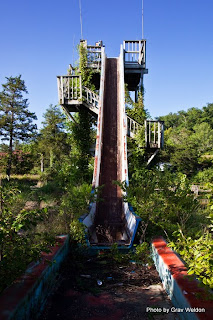 It apparently had its own eerie call. The next morning Grav came and woke me and asked me if I wanted to go into Dogpatch. I looked at the clock, saw it was 6am and told him no, I wasn't ready to get up. A few minutes later I called him, but realized he'd left his phone by my door. It didn't take me long to figure out he'd set out on his own, with no way for me to get ahold of him. 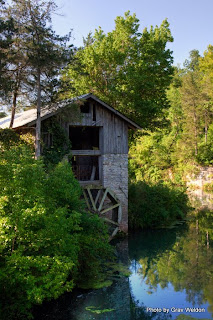 Yeah, that worried the tar out of me over the next three hours.

Grav had set out on his own from the top of the hill and walked right down into the ruins, on a road un-gated but criss-crossed with trees and obstacles that would easily puncture a car tire. He spent a good deal of the morning there, and caused some worry for those of us up at The Hub. 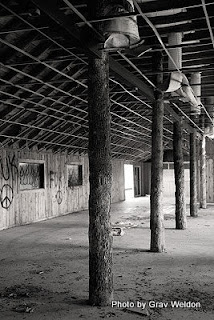 At one park he had crossed a bridge over the falls, those marble falls that had given the park town its new name after Dogpatch went bust. The wood was rotted and if I'd been down there I'd never have allowed him to cross. But that shot at the top of the page was worth it, at least that's what Grav thinks. I'm just glad he was safe. 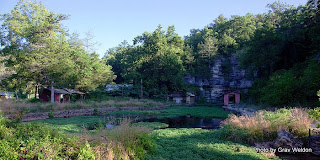 What he returned with were images of a park long forgotten, hints of memories under the overgrowth that he documented with the best care he could, especially for a park he could not have remembered. For several days later we’d swap photos via the Internet -- his from his adventure, mine and others found on the Web of the park in its heyday. 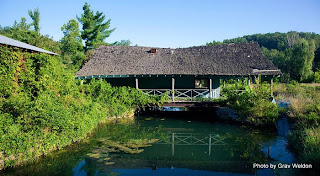 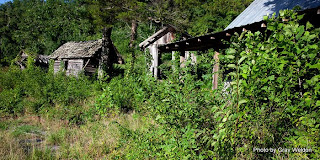 There have been rumors about the park ever since its opening in 1968 and there are rumors today. Just hanging around at the Ozark Café in Jasper we heard about the park being sold on the steps of the courthouse, how the last owner disavows even knowing who owns the park today and of whispers of televangelists and even Dolly Parton possibly purchasing the property. These are all just wisps of thoughts, though, and are all taken with a modicum of salt.

What does remain are the memories and structures barely standing, of bridges that have lost their railings and kissing stone figures lost in the grass. 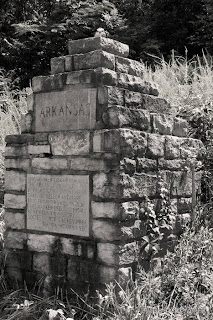 There’s an unusual little monument just across the road from the ruins of Dogpatch USA. The chimney-like marker represents the place where a hunk of marble was hewn in 1836 and sent to Washington DC for the construction of the Washington Monument.

We thought it was interesting, how just as much of the monument recalls the people that erected it as described what the monument was for.
To purchase this article, email Kat Robinson at 10/29/2010 11:17:00 AM