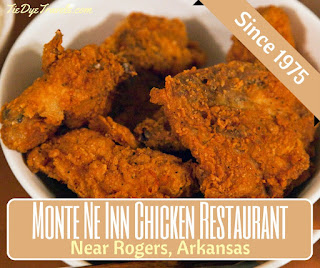 There are a lot of places in Arkansas that could be considered a void for restaurants. In many cases, a single family-run diner, dairy bar or even a Sonic might provide the only prepared sustenance outside of the home kitchen. The quality of these places can be great or iffy, but for local diners who have no choice, they are simply there.

The Monte Ne Inn Chicken Restaurant is the only restaurant in the vicinity of the ruins of Monte Ne
and the only steady restaurant on the way out to the Horseshoe Bend recreational area on Beaver Lake (though there is a small seasonal pizza joint along the way). The menu never hits the table at the eatery — because if you go, you’re going to get the exact same thing everyone else is going to get, a filling family-style dinner of fried chicken and all the fixings, brought to your table and refilled until you are stuffed.

Grav and I are working on a piece on the ruins of the old Monte Ne resort. When we started talking about the assignment, he told me about eating there with his dad. He recalled just how good the food seemed, so I looked up the information and made reservations for a seat. Yes, reservations are recommended. No, really they are.

After the afternoon of shooting, we parked and walked in right at six on the dot, right when we were being expected. I’d read elsewhere that seatings were done by the hour, but no one else was waiting in line when we got there. There were about half a dozen filled tables with families and groups. We were seated by request in the back — better lighting and all that. I was surprised when our host cleared off the other three places at the big round table. I was expecting with a family style restaurant to be seated with others. Then again, the restaurant was not totally packed, so that might have just been a little courtesy. 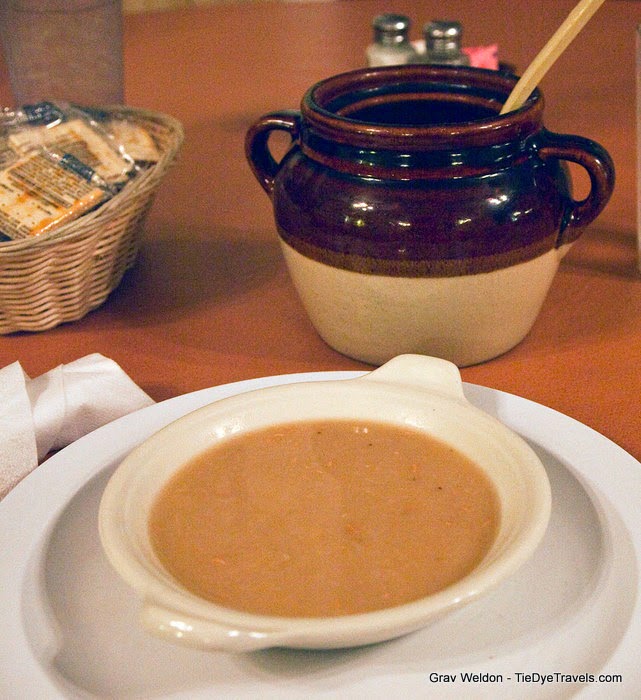 Our waitress took our drink orders (one of two things you actually get to choose) and brought out a crock of bean soup. The somewhat thick soup is redolent of salt pork. It’s a big crock for just a couple of people, but Grav tackled it so we could get a good idea of how good it is. It was… well, it’s bean soup, but it’s a housemade soup and it was a fine example of bean soup. It had been slow cooked for so long that almost everything in it had reached disintegration. 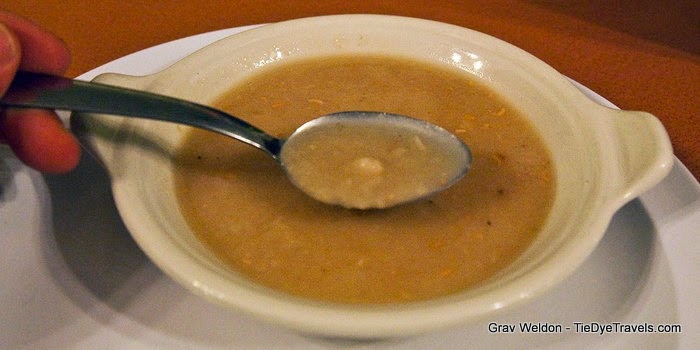 Within 10 minutes of our seating, several other knots of people had come in — a family of nine (including three small children) were planted in a small corner, a six-pack of silver-haired friends took a center table, three guys and their wives shared a rectangular table right by us. The routine was repeated — drink orders, delivery of beans. There was a nice hum of talk between 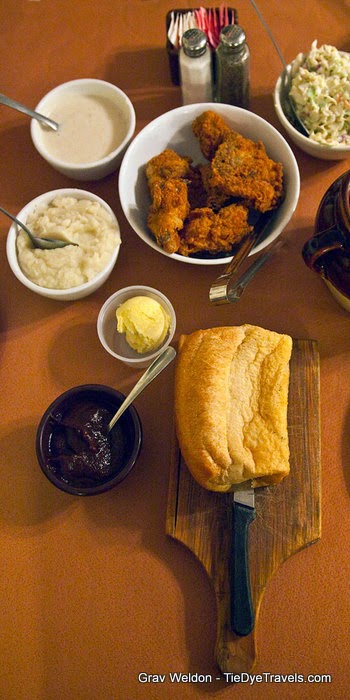 After the soup almost everything else is delivered to the table at once — a bowl of fried chicken (six assorted pieces to start off) accompanied by bowls of string beans, corn, mashed potatoes, gravy and coleslaw, small containers of apple butter and creamery butter and a fresh soft loaf of bread. Everything comes out at once.

You know, I think Grav and I are pretty used to our routine of shooting our meals, but with so many dishes we had to do some major re-arranging. That and his large camera were drawing stares. In fact, I’m not 100 percent certain that some of the readership of this blog weren’t there. There were a few individuals that waved and pointed at us, and I saw at least one conversation rolling behind raised hands in our direction. 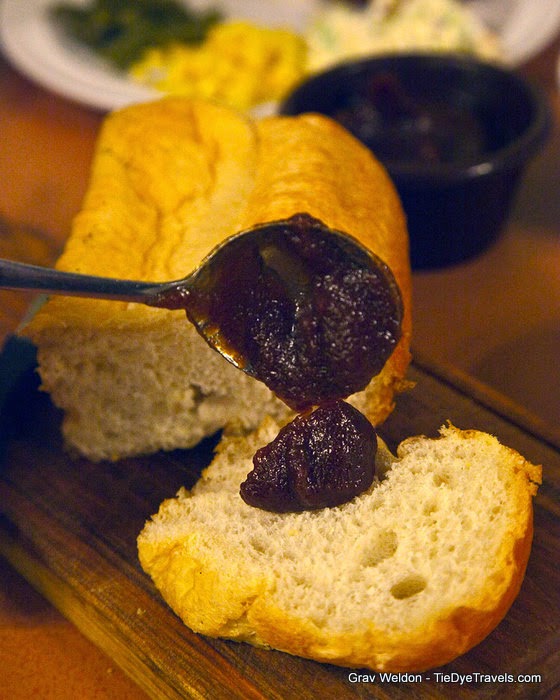 I started off with a sample of the apple butter on a piece of the bread. It was a little hard to cut the bread because it was so soft but it was warm and tasty. The apple butter was a lovely smooth puree that tasted like apples. That is significant — so many examples of apple butter I’ve tried recently have been so overloaded with apple pie spice or simple cinnamon that I’ve almost come to dread the concoctions. Usually it’s become lumpy from the dry spices; here it was a lovely slightly sweet apple puree with a hint of spices. Grav, who just doesn’t care for it, had to admit the 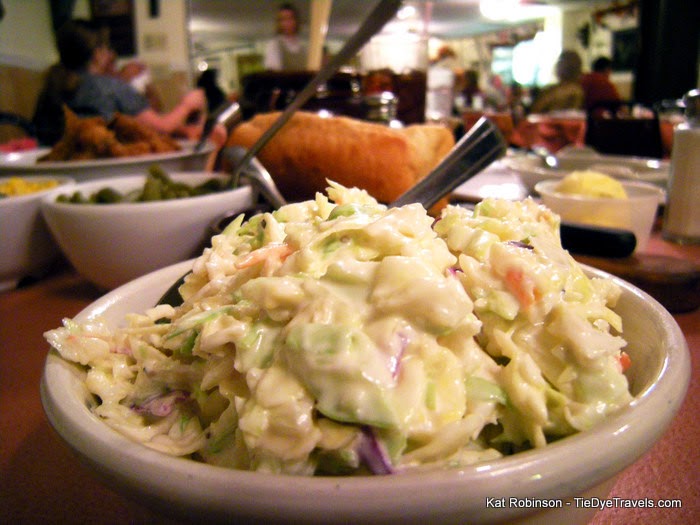 The creamery butter was almost impossibly yellow, and I first mistook it for margarine, but it tasted of a strongly salted fresh butter and was impossible not to smear all over the bread. I’d have been happy with just that. The cole slaw was of the 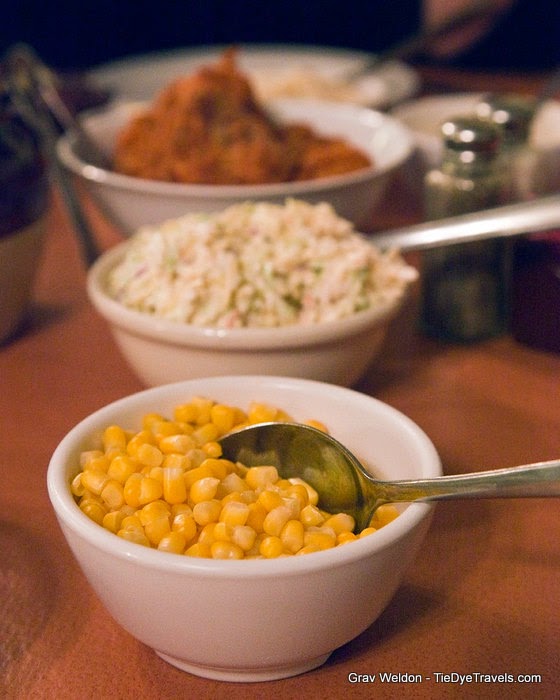 creamy variety but with a nice hearty bite, with decent sized portions of cabbage. It was an unsweetened slaw, the sort that goes well as a side dish or under the bun of a barbecue sandwich.

I couldn’t eat the string beans because they were full of bacon, but Grav told me he was really pleased with them, that they were nicely salted. Unfortuately the corn, potatoes and gravy were lacking in that same salt, but it only took a dash of just the salt (not even the pepper) to bring them up to a flavor we thought was appropriate.

Yes, I’m dragging this out. There’s a reason for that. When I posted on Facebook and Twitter that I was heading to Monte Ne, I had several people tell me I had to stop at this place because it’s considered the best fried chicken in the state. Having had many great examples of fried chicken, I was doubtful. 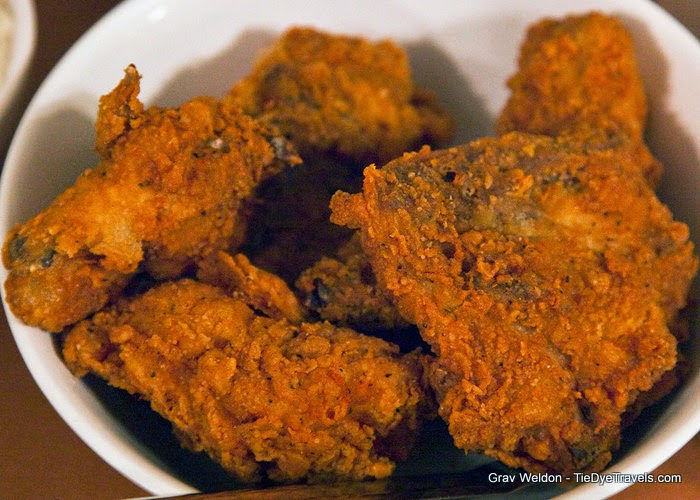 What arrived in the bowl set on our table (which, by the way, was refreshed with a fresh six-piece bowl while we dined) was a fine homestyle fried chicken. To me it seemed very close to a pan-fry, though the lack of blackening on the bottom suggested a deep fried method (or even a deep fried then baked possibility). The 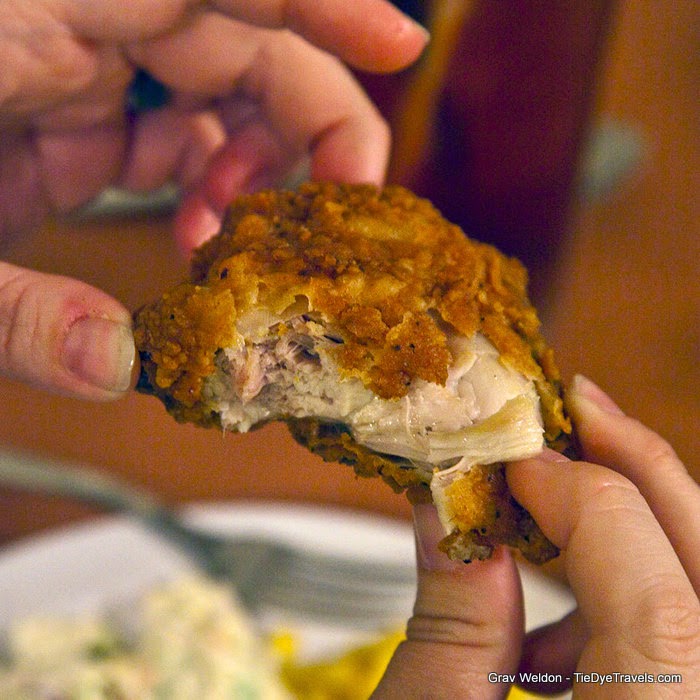 crust was a deep brown, almost red. The skin was tight-in with the meat, which suggested pan-frying (deep frying sometimes pulls the skin far off the surface of the meat below). The batter was nicely done, a flour batter with some paprika and black pepper and maybe a little more secret or special seasoning. There’s a flavor to the bird that makes me think it’s been buttermilk-soaked, which is quite possible considering the tenderness of the chicken itself. 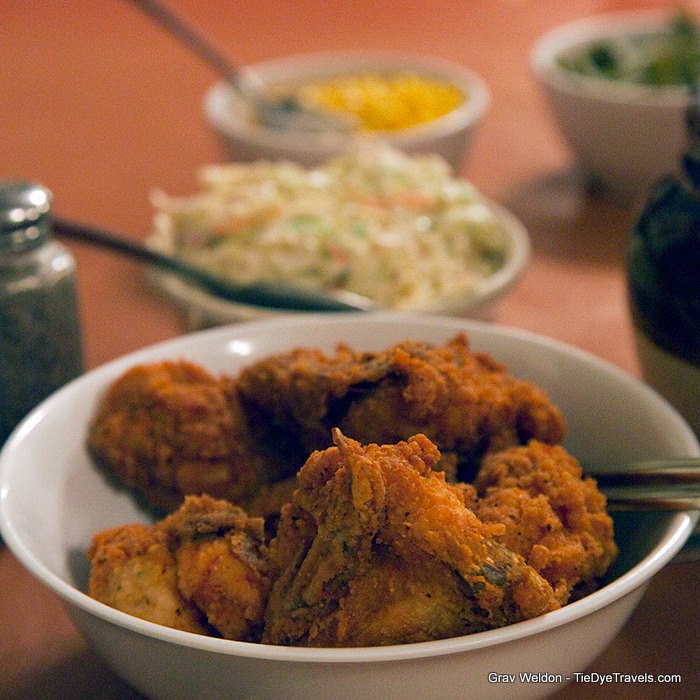 And it is tender chicken. I would have liked more dark meat (and probably shoulda asked for a dark-meat only bowl) because I just prefer dark meat. But even the light meat had a great permeation of flavor. It was pull-apart good, and everyone I saw in the restaurant ate it with their fingers.

The verdict? (sighs) This is pretty hard. I mean, I like the very savory strong flavor in AQ’s chicken. I like the texture at 65th Street Diner and I enjoy the way the meat falls off the leg bones at The Old South. Comparing this chicken to any of those isn’t really right. 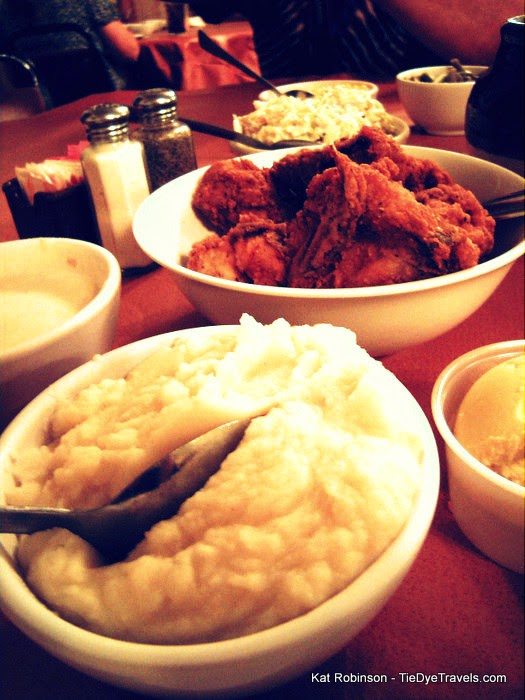 But if it’s not the best fried chicken in Arkansas, it’s tied. The milder flavor of the crust goes well with the thorough seasoning of the meat itself. Dip it in the gravy and it’s wonderful.

Actually, I’ll admit to this. The little bits of crust I dropped into my gravy and blended with my potatoes to eat. That was great. I think the cream gravy could best benefit from some of those “chicken rind” pieces.

There was also dessert, though it’s not included in the dinner price. We were given a long list of desserts — peach cobbler, blackberry cobbler, three 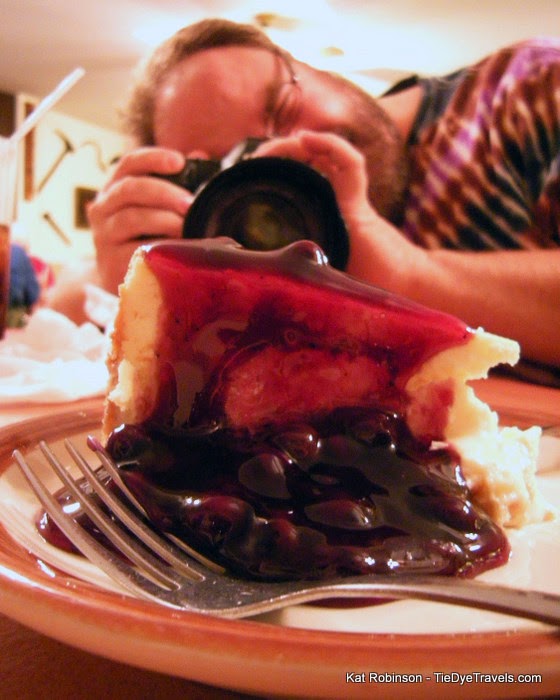 different types of sherbet and cheesecake. We chose the cheesecake, and then had to decide between a cherry, strawberry or blueberry topping. The blueberry we chose was nice and light and tasted like it was combobulated at the restaurant, just blueberries in their juice with a little syrup. The cheesecake was typical but tasty.

The Monte Ne Inn has been serving up its family style chicken dinners since 1971. Unless you’re going there or to Horseshoe Bend, there’s really no reason to be out that way. Yet we passed the restaurant four times while gathering information for our article that Sunday afternoon, and the parking lot was always full. That and all the testimonials I got from readers the past few days… yeah, it’s popular. 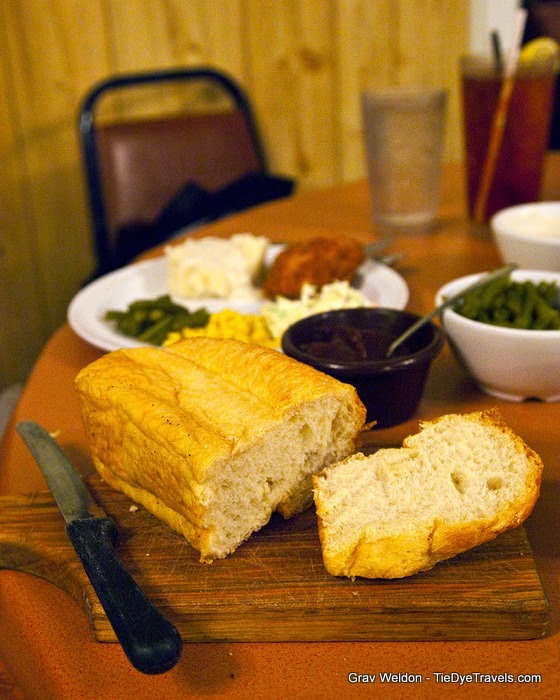 If you haven’t been and you want to go, head up to Rogers and take Highway 94 east. There will be a “Dead End 7 Miles” sign — don’t let that mess you up. It’s four miles past that sign at the intersection of Highway 94 and Highway 94S. Monte Ne Inn Chicken Restaurant is closed on Mondays, open 5 - 8 p.m. Tuesday through Saturday and noon to 8 p.m. Sunday. The chicken dinner with all the fixings is $9.58 (or $10.58 for all-white), $4.50 for kids under 10 and free for kids under three. Drinks and desserts are separate. Reservations are recommended. (479) 636-5511. And there's a website.