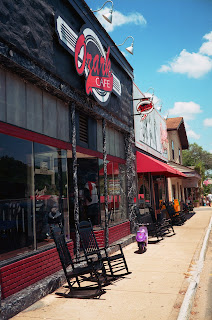 We went back into town for more searching out of things. It didn’t take us too long to end up at the Ozark Café. 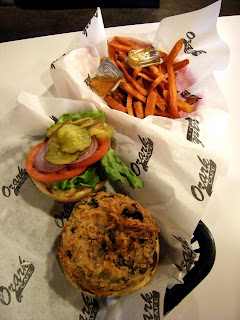 Now I’ve been to the Ozark Café before. When I was on my trip through the area in May of 2008 I stopped in needing to feed my pregnancy cravings. And let me tell you what… there was nothing that quite hit the spot than the Deep Fried Burger. The hand-battered and deep fried patty wasn’t anywhere near as greasy as I thought it would be, and at $4.49 it wasn’t too expensive. 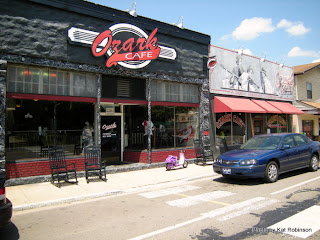 A lot can happen in two years. One of the assignments I’d picked up for this trip was for Serious Eats, an online publication for which I’m a hamburger correspondant. I kid you not. I knew we had to go there, and we were both hot, so we tumbled into the place for a couple of cool beverages and a sample of that burger. 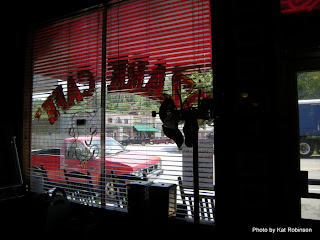 The first thing our waitress told us was that there was no ice cream. The cooler had died a few days earlier and it’d be a few days more before they got the new unit in. I experienced a moment of disappointment. She gave us menus and went to fetch our beverages.

As I perused the menu I noticed another listing: 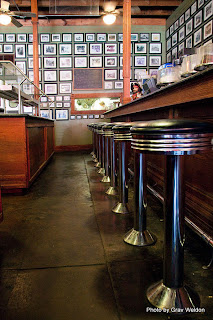 Well, what do you do? We debated over the two burgers, but then Grav pointed out to me that I’d already experienced the other burger and I had pictures… so why not? And since we’d already eaten breakfast -- twice -- we’d split the thing. 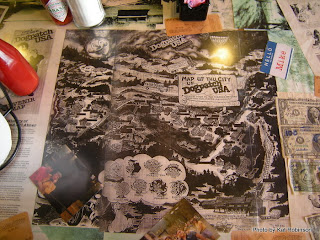 While we waited for our order, Grav got up and took photos. If you haven’t been to the Ozark Café and you’re in the area, you should stop in. The place is a veritable treasure trove of historical photographs and memorabilia from all over Newton County, including a great deal of Dogpatch USA items. It’d be hard to be bored there. The café itself has been around since 1909 and many of the photos you’ll see are from the restaurant over the years. 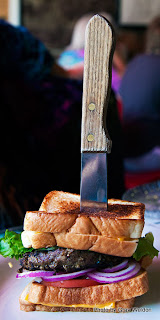 The burger was delivered to our table with a big knife stuck in it. Well, a sword would have looked strange. The grilled cheese sandwiches themselves were butter-toasted, each two slices of bread glued together with American cheese. In between the two were all the things you need on a burger — juicy tomato (very juicy, actually), the Ozark sauce (an herbed mayo, I believe), thinly sliced red onions, the burger patty, green leaf lettuce, flat hamburger dills and a thin layer of mayo. 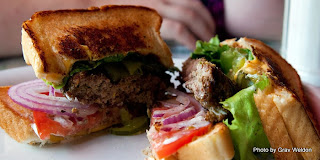 And the burger had this perfect char on it, a grilled burger with lots of black pepper and a hint of thyme, and the strong suggestion on the use of Worchestershire throughout. It’s thick but not ovoid, and it was cooked medium well. 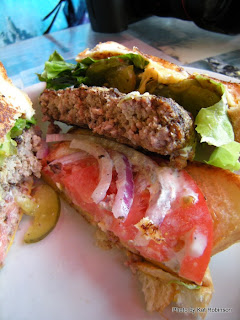 Now, there was one thing that was tough, and that was getting the burger to the mouth. Because of all the wet items, the burger patty tends to slide right out. In the end I procured a fork to finish my half. I was awesomely pleased with the burger, really I was.

We sat there for a while, cooling down and plotting out the rest of our day. I had interviews to conduct and Grav had images to shoot. And there was this bridge.

See, I’ve had this idea for an image for a long time, but no one to photograph it. That’s the problem with being out on your own as a freelancer -- you really are out on your own, so if you want a photo of you doing what you’re doing it has to be something very, very close-up, or it has to be on a timer. I’m not that technologically advanced when it comes to photography.

But having Grav along for the ride, that was a different story. This was the first assignment we’d taken together, and once I told him about the bit about me wanting a shot of me standing in the road, he wanted to oblige. And the first time he saw the perfect shot happened to be on this bridge on Highway 7. 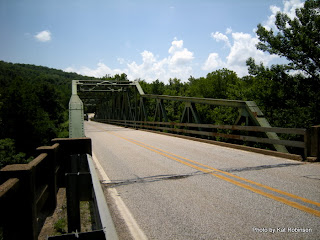 We’ve been talking about how the road itself has dithered down with drivers and then come back up. For a little town like Jasper, though, it’s the main pipeline through which all things flow, from food for the restaurants in-town to building supplies for folks constructing their own river cabins to gravel for roadbeds. So getting this shot wasn’t easy. We parked at the river access on the north side and I walked out there and stood on the double yellow, only to run back a few seconds later at the approach of a truck. With no shoulder to speak of and the drop below, running back was the only option. Trucks making the curve from either direction at 55 miles an hour don’t give you much chance to get out of the way. In all that time we saw just one motorcycle, and we were starting to wonder if our idea about bikers on Scenic Seven was a sound one. 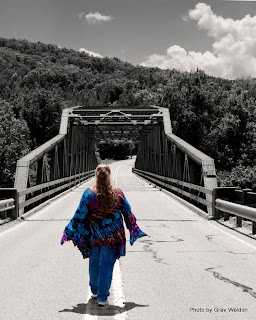 Grav finally caught this shot as I walked out towards the bridge, carefully listening for approaching vehicles. It was now literally 100 degrees outside, I was in long sleeves to keep my arms from burning too bad and the breeze had all but died. I wouldn’t know for another week that he’d captured this perfect shot in that second or two. 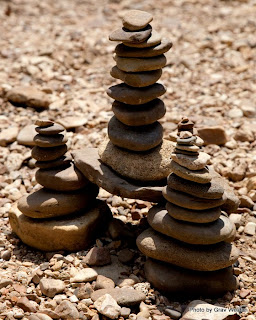 We drove from there down to the river out of curiosity, following the half a dozen vehicles that had made the turn while we were trying to catch that shot. Kids splashed in the shallows as their parents waded out to waist level on the tumbled rocks. Someone had decided to stack those rocks on the riverbank, and it was this we found the most interesting.

The afternoon was waning and we needed to get on up to Marble Falls.

Next: Down into the Dogpatch.