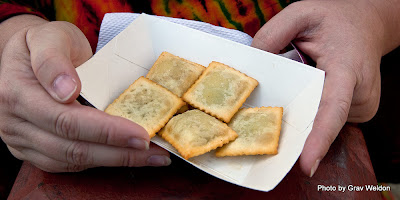 Every year there’s something that just turns the heads of fairgoers, some amazing idea for food that catches on and sweeps the fair circuit in a blaze of “what the heck?” glory that brings people in from far and wide. Last year it was fried butter. In previous years, we’ve had Pig Lickers, Fried Coke and the granddaddy of them all, the Fried Twinkie.

I keep my ear to the ground year-round to see what’s coming up at the big fairs, since that’s my gig. The Arkansas State Fair is of course my home beat, but this year I wanted to run down bigger fish and catch a preview of what might be coming here by heading to the Texas State Fair. And the big buzz this year has been over Fried Beer.

Mind you, there’s actually a contest. Each year vendors who plan to sell their wares at the Texas State Fair submit their menus, and the most exciting of the entries compete against each other. The Fair chose eight fried items to feature in their promotions, their on-site booklets and such. And Fried Beer took the title of Most Creative in the Big Tex Choice Awards. 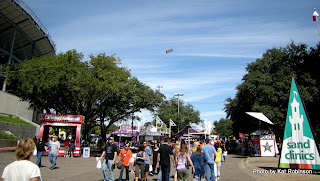 Mind you, getting into the Fair isn’t so big a problem -- the parking lots stretch out for miles, sure, but there are trams to shorten the distances and even the DART to take you to one of the main gates if you don’t want to take your car (parking, by the way, is $15 a car -- admission is $15 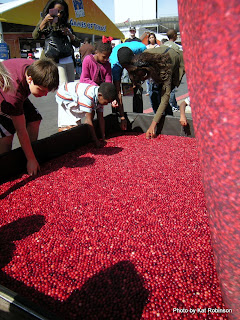 a person). Still, once you get in and get your map, you really realize just how massive the Fair is, and just how far you’re going to have to go. In our case, the route to the nearest Fried Beer vendor took us north of the Cotton Bowl and what felt like miles down a food-lined boulevard on an amazingly beautiful and cool Sunday morning.

We passed by all manners of shopping opportunities, an Ocean Spray cranberry bog booth, the Food and Fiber pavilion and dozens of food vendors with growing lines of folks ready to try things like Deep Fried Pizza, Fried Lemonade and 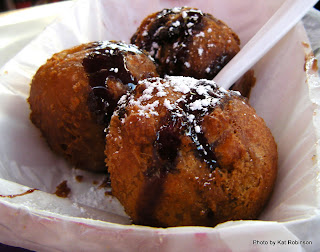 Fried Cookie Dough. Grav and I both had our cameras out and I was taking notes as well… we weren’t going to just cover Fried Beer, after all. 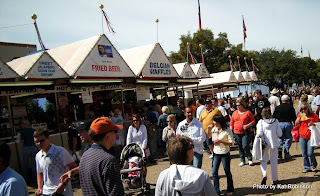 It took us about an hour of shooting here and there and scanning the area before we finally made it to the booth down by the Esplanade. The same booth was also selling chocolate covered strawberry Belgian waffle balls, which sounded a heck of a lot more appetizing. But you knew what we were there for. 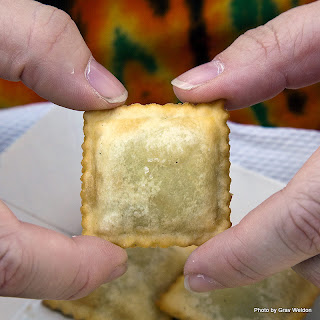 This is the point where I need to pause and explain Fried Beer. It’s not like Fried Coke or any of that jazz. It’s a pellet of concentrated beer frozen and placed in what the vendor said was a pretzel case, then dropped in the deep fryer. In fact, the Texas State Fair folks quote creator Mark Zable as saying "Nobody has been able to fry a liquid before. It tastes like you took a bite of hot pretzel dough and then took a drink of beer."

Now, I had hypothesized that this creation could be a source of a liability lawsuit if served incorrectly. After all, the process takes something that freezes near the point of water, namely beer. It’s put in grease which I am assuming is pretty darn far past the point of boiling. I worried that on opening the little pockets that they’d explode. 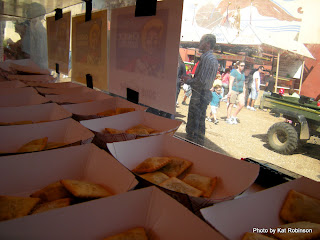 This wasn’t the case. When we walked out a woman was putting out tray after tray of these little beer raviolis, five to a tray, to cool on the counter. I grabbed one shot around the glass and she offered to show them to us. To me, they appeared to be pasta, not pretzel. She emphasized that we needed to get the Shiner Bock logo on the side of the tray. You couldn’t see the little raviolis that way, though.

After a short interlude and break, we came back and forked over the 10 coupons (everything at the Texas State Fair is purchased with coupons, which will run you 50 cents apiece) and got our little tray. 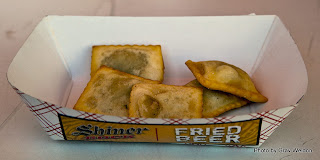 “Now, you need to make sure you put them all the way in your mouth before you bite into them,” she warned us.

“Yes, and shut your mouth. It will explode in your mouth and it WILL cause a mess.”

I raised my eyebrows at him, and he mirrored the move. We moved a bit away to find good light to shoot the little pieces in. I made a point to see if they were hot. They were lukewarm. 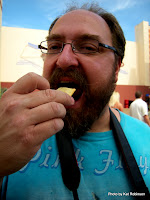 After our cursory shots, I invited Grav to go first, partially so I could get that reaction recorded without my own reaction on my mind but more out of fear and concern. I mean, it looked very questionable. I really didn’t know if I was going to care for it or not. 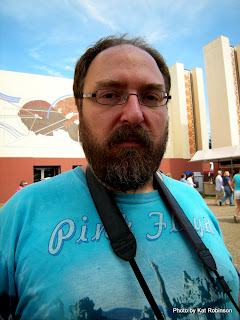 Grav picked one up, looked at it and grinned, and tossed it back in his mouth. The look of what had been a slight adventurous glee immediately disappeared and was replaced with a rather regretful look, a momentary wish that maybe he shouldn’t have stuck that in his mouth. He managed to swallow it, though, and to keep from saying anything about it.

“You need to try it. I don’t want to color your opinion.”

“It’s… edible.” I doubted that from the look on his face, but he shook his head. “Remembrer, I’m not real big on beer.”

I picked one up and tried to grin at the camera Grav had on me. Then I got up the gumption and popped it in my mouth. 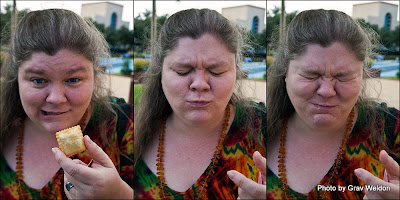 At first, all I tasted was what came across as underdone pasta, like a not-too-well-fried T-Rav. Then I bit in. This gush of warm beer filled my mouth, and it was… well, it was not good. I mean, I’m not a great domestic beer fan, but I do like a good dark stout and can enjoy from time to time a decent pale ale. This was neither, and I couldn’t quite determine what was in it. What it was, was warm beer in a pasta pocket that was certainly not salty or crispy enough to even bring the idea of pretzel to mind.

Grav started to laugh, and I opened my eyes. He’d caught the whole thing on camera.

I winced and stuck my tongue out. “It tastes… familiar. But not in a good way.”

“Do you want anoth-”

“NO!” I told him, looking down at the remaining 3/5ths of our $5 investment. “But I want to see what it looks like on the inside.”

“The woman over there said it’d explode.” 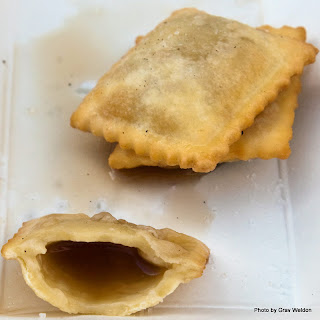 “It’s nowhere near hot enough to explode,” I stated, pretty darn sure of that. I estimated the beer inside was about 80 degrees, nowhere near the point of popping. I balanced the little tray on a light post and Grav tore one in half. The weak liquid of the beer instantly dampened the bottom of the tray. We shot it the best we could.

I think part of the disgust was the blandness of the whole thing. It was just meh. Very meh.

“Can you try another, in case maybe we were wrong?” I asked Grav, and he shook his head.

“There’s no way I’m eating another one of those.” 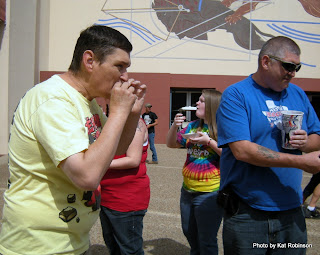 He took the tray and turned towards three guys that were passing by. “Hey, have you tried the Fried Beer?” he asked.

I just gawked for a moment, then joined in the act. “We’re trying to get a good opinion on this. We’re journalists.”

The guys, curious I guess, looked in the tray. Two of them took a ravioli each. The look on their faces pretty much told us we weren’t far off. 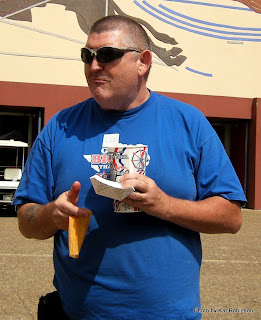 “Thanks, now I won’t have to buy it and find out,” said the other.

We had tossed the tray and wiped our hands and were heading in the direction of a Fried Cheese Curd vendor when it came to me, where I’d tasted that flavor before.

“It tasted like a beer belch,” I spit out, and Grav grabbed my shoulder and looked at me.

“I mean, yeah, a bad beer belch, like with cheap beer.”

“Like the belch you have before you get sick.”

The Fried Cheese Curds managed to get the taste out of our mouths. We spent the rest of the day sampling different fried foods all over that fair, but there was nothing else that just turned us off. I can’t quite get that flavor out of my head, either. And as I’m writing this piece today, I look back at my notes and see the notation:
“Fried Beer: God, Why?”

UPDATE: We thought that was bad. We hadn't tried the Fried Bubblegum yet from the 2011 Texas State Fair. See my reaction on Serious Eats... or check out my Texas State Fair Food Primer.
To purchase this article, email Kat Robinson at 10/06/2010 01:51:00 PM