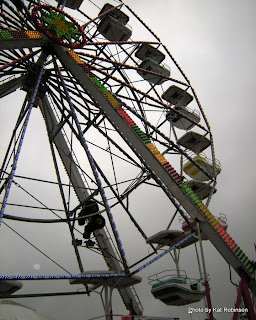 I have been going to the Arkansas State Fair since I was a little girl. It was my birthday treat -- an evening or afternoon spent doing things I could do nowhere else. Back then, I was given an admission pass, a sheet of ride tickets from Affiliated Foods and $20 and let loose upon the Midway. If I’d been smart that year I’d have a few dollars stuck back from my allowance. But back in the ‘80s this was about all I would need to have a pretty good time.

I had this route I’d always follow. I’d start at the front gate and walk all the way down the midway, then turn left at the Swine Barn, head along the backside of Barton Colliseum and end up at the Arts and Crafts building. I had two methods to my madness: I wanted to see which rides I’d spend my tickets on, and I was checking to see if there was any cool new food on the Midway. And if I was lucky, when I got to the Arts and Crafts building there’d be some sort of demonstration I could watch and sample, like a Tupperware party or a homemade ice cream demonstration. 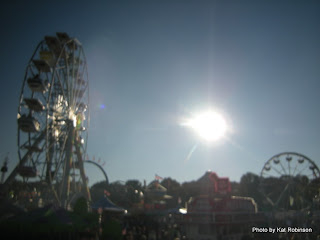 Then I’d go down the hill past the front of the Hall of Industry, walk through the Food Court back to the Midway and double back again. I’d stop for a few minutes to see if there were any freebies being given out at the giant KKYK radio, then head into the Hall of Industry.

And back then, it was always packed with vendors. I’d get a sack from the Highway and Transportation Department (complete with a free map!) and go to town, collecting pencils and key chains and all sorts of stuff. I’d try Dippin’ Dots and bites of food at the cookware demonstrations and samples of dips and chips from the guy back in the corner of the big room. Every radio station, every politician, every local cause would have something to give away, and I’d take home a haul.

I’d usually check my watch about that time to make sure I hadn’t used too much of my time. Then it was to the Food Court to try something new and exotic. I can recall a year when egg rolls were strange and new and weird. Another year it was gyros, another big beef skewers. There was always something new.

I’d always be very careful with the money I had -- I had a certain thing I wanted to get before I went! That meant I walked past a lot of carnival barkers, though. I saved my games-of-skill money for the cheap things like darts -- I was really good at popping balloons with darts, and could always end up with something, even if it was one of those tasteless little square mirrors with a hair metal band’s name on it. Stuffed animals were better prizes, but those were best left for getting ready to leave or they were a liability on the rides.

And there were rides! I was always nervous about the really big tall rides like the swings and such, but things like the Scrambler were AOK. I loved the funhouses, and they usually didn’t take as many tickets as the other amusements. And then there was the year that the Gravitron 2000 came in. This big space-ship thing came to the fair, and it was four whole tickets to get on the thing, and there was a line back past the big swings to get onto it. It had to be good, right? Well, it was okay, but that was the only time I wasted my money on it. 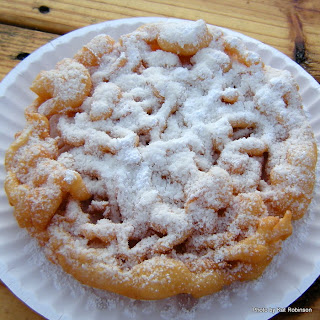 I’d always end my Fair trip with a funnel cake purchased from the place right next to the long corn dog stand, and I’d sit and eat it by the KKYK Music Machine and see what sort of stuff they were giving away. I’d usually hang out there until about five minutes before I was supposed to be picked up, and that was it.

I still go to the State Fair every year. I spend a lot less time on the rides and a lot more tome strolling through the animal barns and educational displays, but it’s still a favorite for me. I hear there’s a possibility it’s gonna be moved, and that sorta makes me sad, but on the other hand I understand the reasons why. I hope whatever happens, Hunter gets as big a thrill out of it as I do.
To purchase this article, email Kat Robinson at 10/05/2010 03:25:00 PM