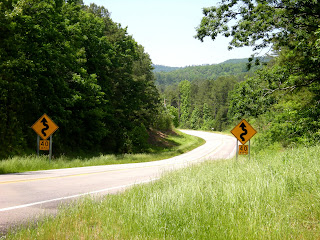 The road took us up and onward past Pelsor, past many pulling-off points like the Fairview Campground, the Who’d-A-Thunk-It Store (promisingly open), signs leading to cabins and a roadside stop for bikers called Hog Heaven. We even slowed down a little bit some 19 miles up the road as I pointed out my favorite overlook. I made Grav promise to stop on the way back. That place was important to me. 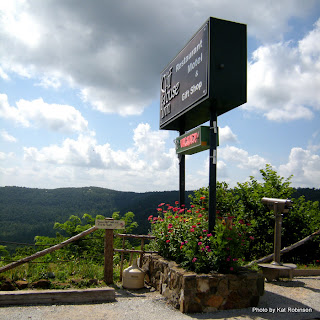 Three miles further along and the Cliff House Inn graced the right side of the road. The sun was just really getting out over the ridges dozens of miles away, burning off the end of the morning’s fog from the valleys below. Knowing we were on limited time, we went on in. It was a quarter after ten, and I had breakfast to catch.

I asked at the counter if breakfast was still being served, and a quick passed question to the kitchen confirmed that yes, we could eat breakfast. We sat and breezed through the menu. Grav agreed to eat my bacon if I’d order the French Toast. I always appreciate someone willing to eat pork so I can have something I want.. 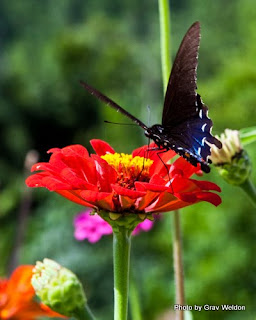 As soon as we’d ordered, he took off to take some exteriors. I tried to shoot in the big room we’d been seated in, a long glassed-in deck along the back of the building overlooking the valley below. The inside walls were covered with area memorabilia and publicity shots of stars, but my guess is that they rarely get much of a look. The view is stunning, an achingly beautiful sea of trees down to the valley far below, wildflowers close up, hawks soaring overhead. It can take your breath away.

Our breakfasts soon arrived. The waitress had raised an eyebrow when Grav ordered his egg boiled but didn’t make too much of a fuss. We pulled out our cameras and shot away. I noticed how the light from the still rising sun turned the bacon translucent and made the big squeeze bottle of honey appear golden. The light was strange, and other items came across as ethereal. 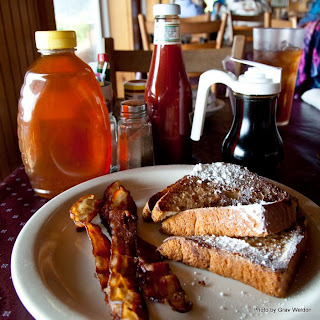 Having had to smell those hot pecan rolls at Hankins Country Store, I wasn’t wanting to wait any longer. I dug into the French toast, immediately enjoying the nutmeg and cinnamon tucked into the batter. I tried some of it with the honey, sort of an Arkansas thing I think, and thought of how great it was we have so many places to pick up honey around here. It was delightful. 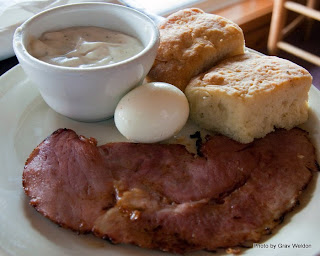 Grav had chosen the country smoked ham steak breakfast -- and told me it wasn’t all that salty for ham, not like he was used to. But he also told me it was deliciously smoky and perfectly cooked. He also liked my bacon, the thin long rashers being cooked just to the right point of crispy.

The biscuits… well, I had to steal a few pinches of his biscuits. The Inn advertises them as Angel Flake Biscuits. I found them to be more of a traditional shortening biscuit, slightly sweetened and perfect for soaking up a little gravy or egg yolk. The moist texture was just slightly crumbly. They went nicely with the offered pepper cream gravy that came with Grav’s breakfast. 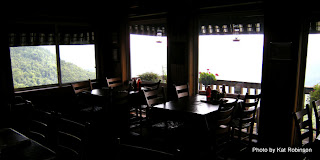 We took our time after breakfast, knowing we didn’t have to rush so much after that point. The gift shop carried all sorts of those staples travelers love to take home with them to remind them of Arkansas -- lye soap, horehound hard candies, jellies and jams, walking sticks and tin signs with sayings on them. There were restrooms, too, and they were small but clean. 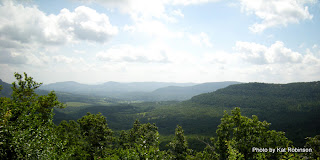 The Cliff House Inn isn’t just a restaurant; tucked up underneath the restaurant are several motel rooms with that great view of the valley below. They rent in the $75-90 range. Can you imagine spending a fall morning watching the sun come up over that brilliantly colored red-and-gold valley below? That’d be a sight.

We rolled straight on up into Jasper from there. Three miles north of the Cliff House Inn we passed Scenic Point Gift Shop with its tower and started the descent to the valley below. I’d traveled this way in early spring 2009 shortly after the ice storm and had been shocked by the devastation. At the time I’d been told that the area wouldn’t recover for years, that there’d be no trees for greenery along the way.

But there was quite a lot of greenery, actually. Nature had come back with a vengeance in the form of kudzu and saplings, and though the view to the valley below was somewhat clearer it wasn’t barren. But it was hard to just look -- the road itself had become somewhat treacherous. Washouts and mudslides have taken their toll on Highway Seven’s northern slope into the valley. Patches of asphalt are fresh and rough. One section actually diverts the roadway around a place where the highway had completely washed out. What’s left hugs the hill tightly. Trucks already using low gear for the grade crawled along even slower than usual.

The bottom of the incline is marked by the wide spread of the Newton County Fairgrounds, just past the runaway truck ramp. A few more curves into the woods, a few more descents and we were rolling around and down into Jasper proper. 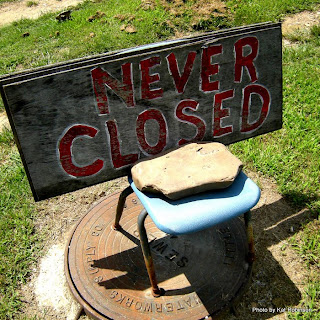 And Grav had to stop, right then. There was a totem pole inexplicably in the side yard of an old gas station. This bore some investigation.

We poured out of the car and started shooting. The totem bore the inscription “Jasper 08” on its spread wings and the faces of owls and other creatures below. 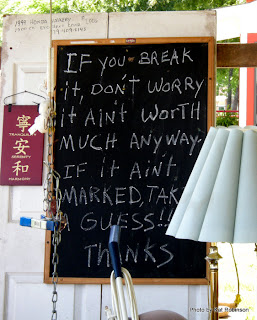 The location seemed a bit odd, right behind an honor yard sale. 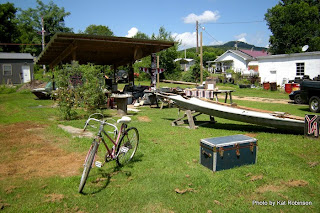 See, most people actually sit out and attend a yard sale. This one was set up with directions to leave money for anything purchased in a slot in a door in a shed in the back. Some items were marked; others were not, and it was assumed that you’d leave an appropriate amount behind.

I was rather taken with an old working console stereo… working, I knew, because the folks who had put out this shindig had run an orange extension cord out to the pavilion to keep it going and playing music. We found everything from ovenmits to coffeemakers to steamer trunks under the pavilion, and an old kayak and canoe out front amidst a few tomato plants. 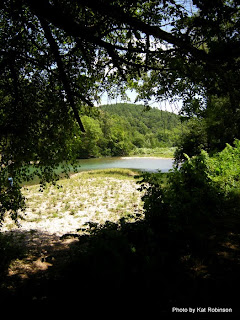 After a brief orientation through town, I showed Grav one of Jasper’s little hidden jewels. I took him down Clark Street past the high school to this park that’s tucked into the elbow of the Little Buffalo River. Ball fields and picnic tables are spread out in the big curve, but what’s really fantastic to see is the river beyond.

The river is green in its shallows, something so beautiful and calm about it that makes me want to just sit on the bank and take photographs. At the eastern end of the park there are shoals that jut out into the river, perfect for walking down to and skipping stones. At the western end there are stairs that take you down to the water’s edge, and when it’s rained recently you can see a waterfall on the opposite shore. 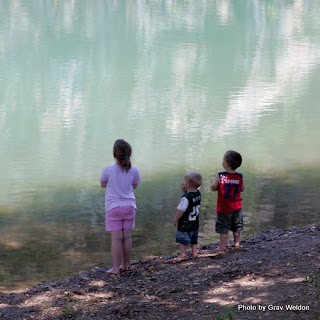 Children were playing at the water’s edge, their cackles and happy cries echoing off the cliff face on the other side. A handful of Diana Fritillaries fluttered back and forth between plants on the ledge. They pestered us and flicked back and forth from time to time, brushing up against us as if daring us to try to get adequate photos of them. 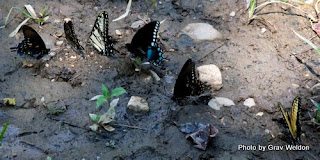 We noticed a fluttering on the edge of the water. Grav scampered down to look. Half a dozen butterflies were perched there on the rocks, and they didn’t pay attention as he scooched closer to photograph them. 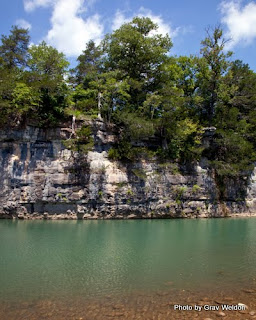 It was hot, for sure, nearly noon and a heat index in the town that had been close to 100 degrees. But on the riverbank it felt around 85. The wind sighed in such a carefree fashion, as if to say “there’s no need to rush.” And for a while it drew us in, the calls of a few birds here and there, the calls of children playing, the far distant echo of cicadas. I sat on the riverbank for some time, absorbing the calm that had eluded us through our rush to get up the highway.

And then I heard the rumble of thunder, the echo of engines and wheels on pavement. I looked up to see three cycles passing behind the trees on Highway 327 which rolls above and to the north of the little park. The noise wasn’t a huge disruption but a reminder of why we came up here. We had a story to follow. A couple, in fact.

Next: The Excaliburger, the Washington Monument monument and Dogpatch USA.