Scenic Seven Survives I: Into the Ozarks. 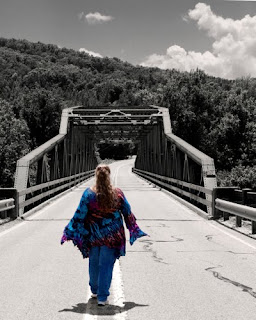 Highway Seven’s northern leg is a twisting, snarling buck of a ride, rolling its way over hill and crag as it crawls up into the Ozarks from Russellville for its eventual sigh of relief in Harrison. The miles in-between have been their own source of folly, a litany of attraction and motels and tourists traps mostly eaten up by time and bad fortune. These roads that once saw traffic that never stopped now sometimes lays languidly calm on autumn afternoons, waiting for the next denizen to roll up and past and onward to another destination.

Thirty years ago and more, the sound would have been of sedans and station wagons packed with kids, families escaping the cities or making that grand trek to take their ilk with them to see what Arkansas was all about. They stopped at places like Booger Hollow, the Arkansas Grand Canyon and Natural Bridge on their way to that pinnacle of hillbilly greatness -- Dogpatch, USA. 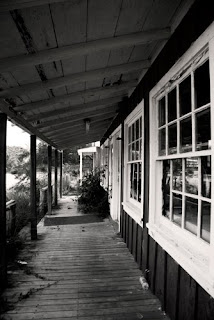 Those sounds now are quite different. Booger Hollow has been abandoned nigh on four years now, Dogpatch has echoed quiet for a decade and a half and while people still stop to take photographs into the deep crevice the Buffalo River has carved over time, those visitors are fewer and further between. So many of the gift shops, the quilt stores and flea markets and craft fairs and such -- they’ve all dried up and blown away. Boomtime was three decades and more ago. 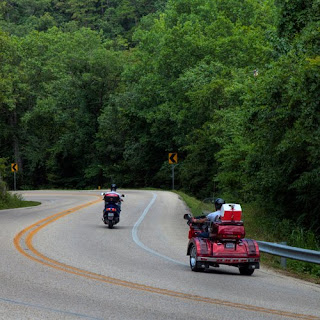 But there is an echo of progress and more traffic on the road now than has been in a decade or longer. There are still sedans, but now they haul families up to Ponca to watch elk in the early morning hours. There are couples in coupes heading to a hillside cabin retreat. And there are the two-wheeled variety of traveler, the weekend warriors, motorcycle enthusiasts who are searching out the thrill of a good ride and a place to lay their heads in-between stretches of pavement on a Friday or Saturday night. These are the people who are coming home off of Seven and sharing their tales, who are heralding a little town in the hills called Jasper, and who keep telling people about the miracle at Marble Falls overlooking the ruins of Dogpatch. This is a story of Scenic Highway Seven, today.

We came to Scenic Seven, photographer Grav Weldon and I, on a hot dusty July morning to find out how the communities along the road are surviving. I’ve traveled the stretch many times and watched the eventual degradation of the area. 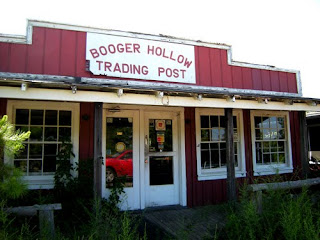 As we traveled, I told Grav my stories of Scenic Seven. I shared with him the stories from the 1992 presidential elections, when reporters lit on Booger Hollow (population seven, countin’ one coon dog) to find out more about The Man From Hope and to show the world what Arkansas was like. I shared also the thrill I’d get from stopping in at the store with my folks as a kid, paying a buck to pick up a bag of tumbled rocks and how the whole place smelled like smoked ham. 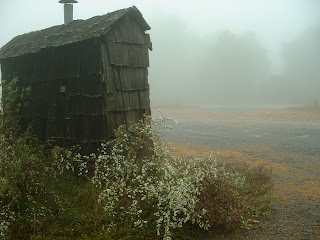 I went back to Booger Hollow in October 2007 because I wanted it as one of my first entries on my blog, Tie Dye Travels, but it had been closed most of a year and the property was in dispute. At the time it looked empty but not that far gone. 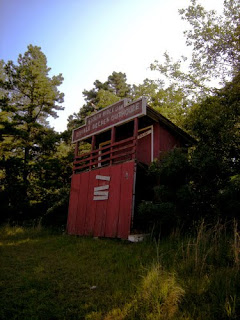 We passed by Mack’s Pines this day (I was surprised to see it was up for sale) and rounded the curve a short time later to view the remnants of Booger Hollow. There was another vehicle there, a truck with a guy talking on a cell phone. We hopped out and I showed Grav the famed Double Decker Outhouse. He showed concern for picking up chiggers but chronicled the ruins of the attraction; I walked around and noticed the back door standing wide open, a sour stench coming from inside. I’m not sure if transients had used the place for a flophouse or if it was just the aging of the dead attraction, but while I’d felt ghosts on my last visit this time it just felt like an empty shell.

It’s a real shame. Booger Hollow was the place to stop for any sort of hillbilly kitsch, for a good smoked pork product or a handwoven basket or even a postcard and a Coke before heading on up the road. I’d hoped that it would survive and come back, but that looks unlikely now. Even the place that sprung up down the road from there, called Chigger Hollow, seems quiet. Like so much of Scenic Seven, Booger Hollow has faded away. 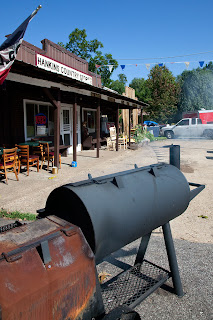 But you don’t have to go far up the road to find a place to stop and have a bite to eat. It’s in a quiet place, barely a stop-over before heading up further into the Ozark National Forest. We were stopped by the smoke.

A Facebook fan had keyed me in on Hankins Country Store, an older property at Pelsor along Scenic Seven. On my last trip up I had noticed the building was empty. This reader had told me I needed to drop in and have myself a bread pudding muffin. Since I’ve been on a breakfast trek this summer, we had to stop.

But the scent we had picked up was of pork ribs smoking in a small black contraption out front of the store. We pulled in and took out the cameras. The store was alive and active.

Grav questioned a guy who came out to check on the smoker about the delicious scents. I went on in to see if I could find these pastries. 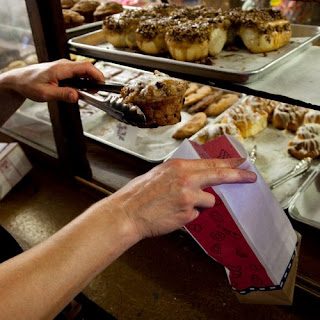 Jennie Yohn was just walking a big hot pan of pecan rolls over to the old school bakery case. She smiled at me and asked if I was interested in having one. I asked her in turn if it was all right for me to take photos of the place. She looked a little puzzled but agreed.

Grav came through the door, very cheerful about the smoker. “They’re doing beef brisket later today!” he told me, quite happy about this news. I pointed at the bakery case, which was starting to fog up from the just inserted pecan rolls. He also asked to shoot photos and got underway. It was nearly nine in the morning. The place smelled heavenly. 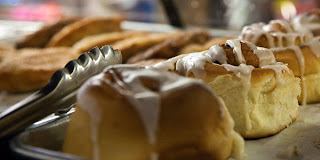 Turns out, the baked goods and the ribs and all other sorts of stuff are served up almost daily from six in the morning to six at night as part of 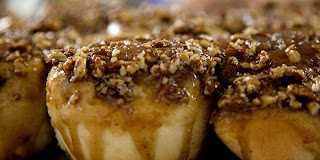 Blue Mountain Bakery, the eats place run by Yohn and her husband, Roy. That’s not all you’ll find there -- they also carry all sorts of sundries and groceries and things you might need if you’re planning to camp in the area or if you forgot something. 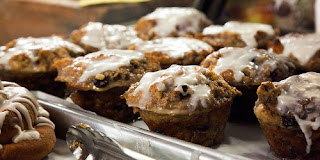 We ended up walking out of there with a pecan roll and the bread pudding muffin I was there to try in the first place. As breakfast pastries, you could do far worse. The pecan roll was a symphony of butter-type notes, full of cinnamon and caramelized pecans with that great bready base. The bread pudding muffin was unusual and would have benefited from a quick pop in the microwave had we been thinking about it, but still nice and custardy. We marked it down for further investigation.