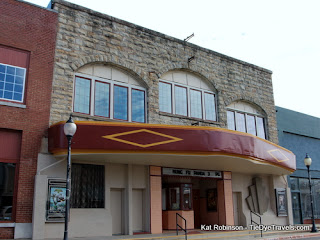 A movie theater on a small town's main drag was a staple for communities during the 20th century. The Scott, open since 1930, still sits at the heart of a western Arkansas town.  Take a look inside. 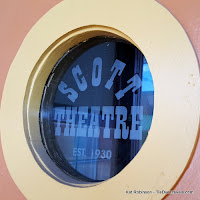 When I started planning our epic road trip along US Highway 71 from the Louisiana border to the Missouri state line, I looked closely at every town we expected to pass through.  And when we got to Waldron, I recalled two stops I had put on my must-visit list: The Rock Cafe and the Scott Theater. 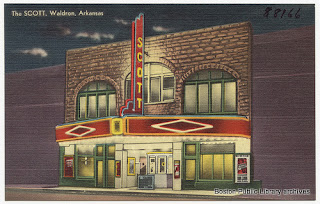 The former is mentioned for its legendary strawberry cobbler in my second book, Classic Eateries of the Ozarks and Arkansas River Valley.  The latter, I have been hoping to see for myself for some time. However, my last check of the property had made 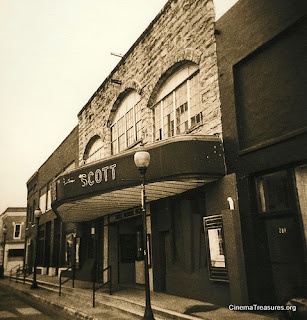 it seem closed for good.

That's not the case.

The Scott was originally The Pines Theater, when it opened in October 1930.  It was renamed in April of 1940 as The Scott.  The original theater had 340 seats for its single screen,

Though it closed briefly at the end of 2014, it was purchased and reopened in October 2015 after a retrofit and renovation.  The 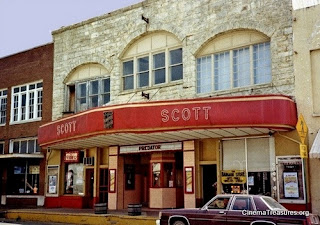 upgrades included a pricey replacement of the original film projector to a new state-of-the-art digital video and sound system.  Today, the theater seats 220 comfortably, and operates every Friday, Saturday and Sunday night.  It is believed to be the oldest operating movie theater in Arkansas. 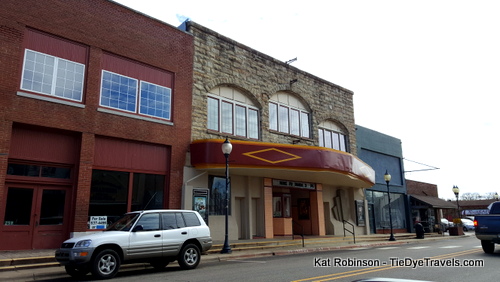 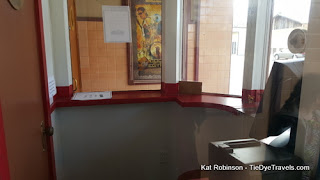 Mandy Day met us that morning and took us on a tour,  Even before we went in, I was impressed by the well-kept box office and the gorgeous round porthole style windows on the doors. 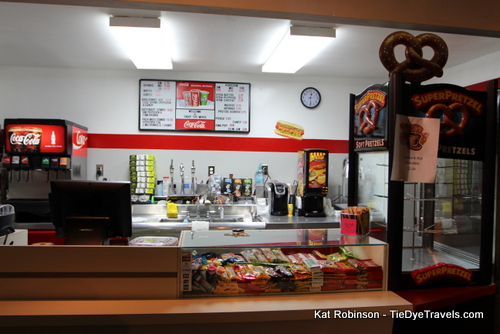 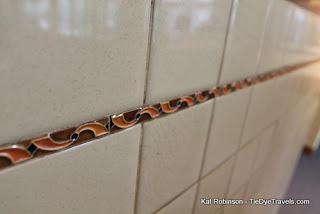 A lot of details have been preserved with the theater, such as the tile work.  But the original concession area was packed into a very tight vestibule. Now it sits just beyond, and offers very reasonable prices on popcorn, beverages, nachos and all the other things you might expect

from a great movie theater.

Part of the challenge of renovating the theater came from state requirements for ADA compatible restrooms.  While the original restrooms were tight and tiny, larger units built into the front of the building are nicely done and decorated with old film reels salvaged from elsewhere in the theater. 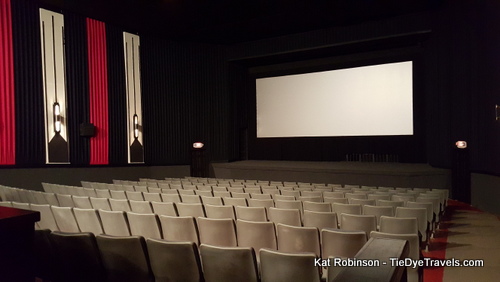 What's truly impressive is what's beyond the concession counter.  Once you pass through into the theater, you'll find an impressive combination of both old and new.  The screen, recently replaced, hangs above a stage, which means there's a possibility of holding other events in the space.  195 seats sit on the main floor.  Meticulously pleated red, black and white curtains adorn the walls, covering plaster original to the theater. 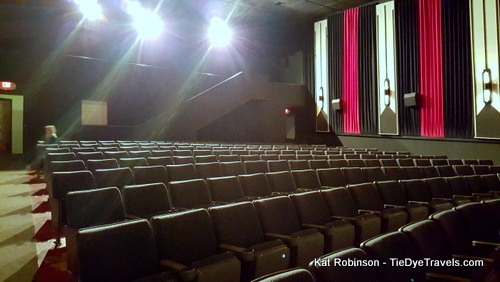 The remodel included a balcony, which wasn't original to the theater.  In fact, when renovations were underway, a small apartment was discovered upstairs, complete with clawfoot bathtub!  Today, 25 seats have a prime view of activities and movies below, with a strict rule of no unaccompanied children enforced for the balcony. 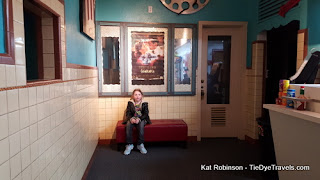 Because there's just one screen, there's just one movie to see, but that hasn't kept people from coming down and enjoying a show, even from Fort Smith and Mena.  The Scott Theater is the only theater in all of Scott County, and its 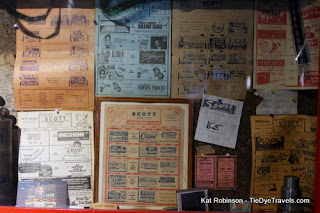 The Scott Theater is located at 281 Main Street in Waldron. If you'd like more information about The Scott Theater or want to see what's playing, check out the website.  And keep up with happenings there on the Facebook page.

Share our experiences - click here to see where else we went on our epic road trip along US Highway 71 from the Louisiana border to the Missouri state line.

Had burgers at Allen's Burger Center in Fouke.
Spent the afternoon at the Four States Auto Museum
Dinner that night, we realized El Chico's Arkansas connection
Our overnight accommodations in Texarkana at the Hampton Inn, room 400
The next day, we checked out Elve's Peanut Patties
then visited the Arkansas Welcome Center at Red River
and downtown Ashdown
and stopped in at Karen's Krystals in Lockesburg
We had lunch at Cypress Restaurant (or the Five Percent) in De Queen
visited Cossatot River State Park Natural Area near Wickes
and stayed overnight at Queen Wilhelmina State Park Lodge
After we explored the Scott Theater in Waldron
and had fried pies at The Rock Cafe
we drove to Chaffee Crossing to experience the Chaffee Barbershop Museum
and the Enchanted Doll Museum
and stayed the night at the Fort Smith Hampton Inn