An Unexpected Education at Karen's Krystals in Lockesburg. 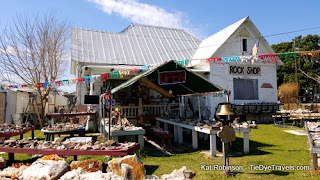 "Someone gives you a rock, you're a friend for life," a quick lesson alongside US Highway 71 on a sunny Monday afternoon.  Read about our visit to Karen's Krystals. 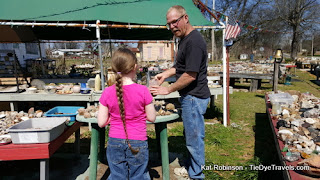 His name is Steve, and the moment we came around the edge of the house he greeted us, quickly pointing out a kids table of 50 cent rocks and another where everything was five dollars or less.  But once he saw Hunter's eyes light up, he began to 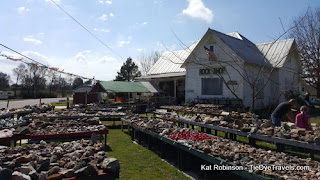 explain everything we could see on the tables that ran across the triangular yard along US Highway 71 in Lockesburg.

"If it's an 'ite' or a rock, we probably have it," he stated as he started out on a conversation that lasted half an hour, a weathered friendly face sharing all sorts of knowledge with a porcelain-skinned child with freckles on her nose. 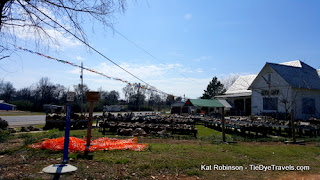 We'd been heading north on US Highway 71 as part of our research trip for our Spring Break on 71 story (you can see our progress here) and were high-tailing it from Ashdown to De Queen for what was our expected next stop.  We were running behind but not letting it stress us; after all, the whole idea was to see what a family could reasonably accomplish in a week of exploring the highway from the Louisiana border to the Missouri state line.

A glint of crystal caught my eye as we passed through Lockesburg, immediately followed by "let's go there!" hollered from the back seat. Hunter wanted to look at rocks.  So we were going to look at rocks.

Hunter's been fascinated with rocks for some time.  I think I took her to her first rock shop when she was three, and it wasn't far away, some place on the road between Mt. Ida and Hot Springs on US Highway 270.  She'd kept that rock and many more over the years.  She likes rocks.  I can't say I disagree with that - when I was a child, I had a rock collection all my own. 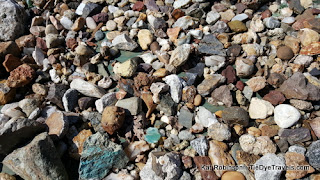 And since Hunter was calling the shots, I obliged her, slowing down and making the odd turn back onto the diagonally-aligned road.

We got out of the car, walked to the corner of the building and emerged into sunlight.  A door clattered, and Steve came out.  And the dialog began. 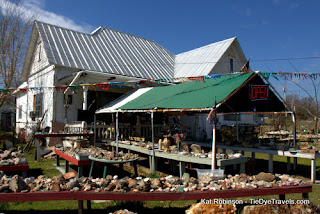 Steve started out by showing Hunter some different types of stones under a canopy, but soon progressed to the crystals.  Seems Steve and his family go out to Mackerel Mines and dig crystals by hand together.  Some of the many plates they've unearthed are for sale for varying amounts.  He 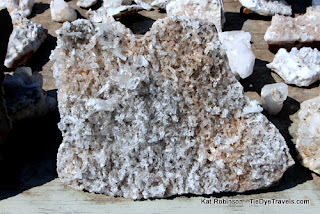 shared how each crystal plate is acid washed to clear off the dirt.

And then he showed us a few examples where he'd left the dirt on.  These orange crystals may not have sparkled as much, but they were still gorgeous.  "It's like God made them to be." 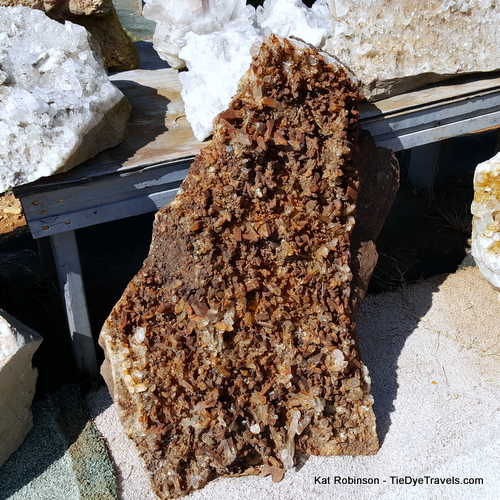 Hunter was agog, and kept asking questions.  They progressed further. 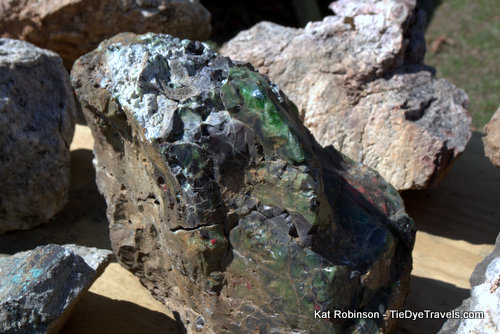 He showed her a lump of rock that had a green hue to it.  This was atomic glass from New Mexico, created during the atomic bomb tests out there. 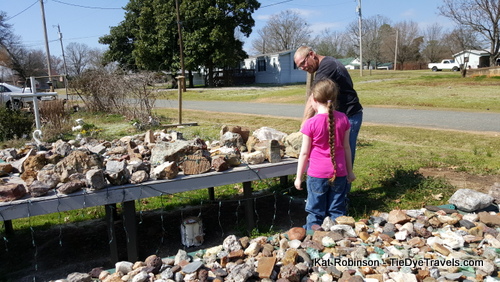 He showed us a lot of black rocks and asked Hunter what they were.  "Obsidian?" she asked, and got a hearty nod.  Steve then proceeded to share with Hunter all the different types of obsidian on those tables, including a red-streaked version called mahogany. 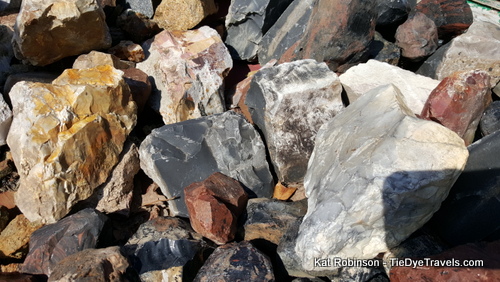 Novaculite? There was plenty in abundance, and Hunter learned that this grayish stone was perfect for sharpening knives.

One after another, table by table, Steve shared stories.  He told Hunter about a Native American tribe that was surrounded on a cliffside who plunged to their deaths, and that the tears of the children and women who witnessed the act became these smaller obsidian pieces called Apache tears.  He expressed a little squeamishness with dealing with snakeskin quarts, which fascinated Hunter.  He showed veins of turquoise in a rock, and a small plate of opal pieces he had attempted to create into jewelry. 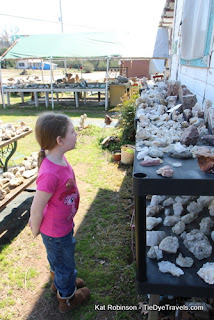 This swell guy, coming out to give an education to a young girl who just showed a little interest in rocks, was pretty inspiring.  But what struck me further was, after showing her around for more than half an hour, when she offered a couple of dollars for a few pieces of stone she had found in a tumbled stone bin, he gave her a sack and walked her around and kept putting more stones in that bag until it was heavy.

"If someone gives you a stone, they're your friend for life," he told Hunter as a piece of that snakeskin quartz went into the bag.  And more pieces were delivered, petrified wood and a little teal-colored rock and 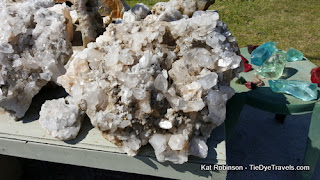 I asked him his name, and he shook my hand and we headed off to our next destination.  But here it is, a week later, and Hunter is still talking about those stones and still opening that bag, which she's taken into each hotel and cabin we've stayed at on our trip, telling me those stories again and again. It's the sort of thing she'll never forget, and I won't either.

I found this article on Karen's Krystals after our trip there, and it has good information about Steve and his wife Linda.  If you're in the Lockesburg area, be sure to drop by. You'll find Karen's Krystals at 3502 South Carnelia.
Told by Kat Robinson at 10:28:00 AM