Time Travel to the 80s at Arkadia Retrocade. 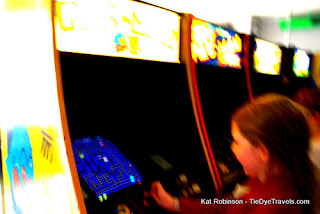 Want to escape to a simpler time when Pac Man Fever was an actual thing? Take a trip to Fayetteville and enter the realm of Arkadia Retrocade.

When I was putting together our epic road trip, I gave Hunter some options.  No, she didn't get to decide each city we'd stay in, since she's not savvy to where hotels are located.  But she did get to choose the places she was most interested in visiting.

So when it came to Fayetteville and this listing, she got all stern with me and demanded we go to Arkadia Retrocade.  It was added to the itinerary. 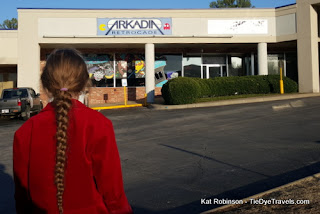 From the moment we finished up with the previous stop on our list (Terra Studios), she started peppering me with questions about when we'd be there.  When I insisted we needed to check into our hotel first, she griped.  And the suggestion to eat dinner first was on deaf ears.

We were going to Arkadia Retrocade. 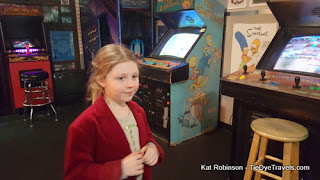 Still, walking in, she was overwhelmed.  After the lovely gentleman at the door took our $5 each and told us how to load the games (with a button that replaced the need for coins), we walked in and Hunter looked around... 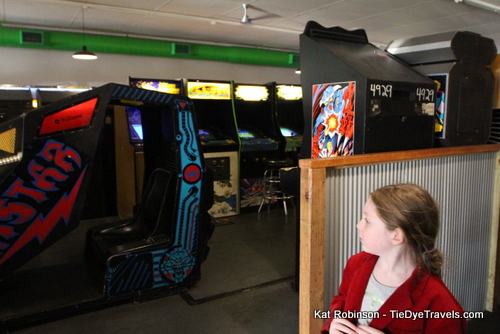 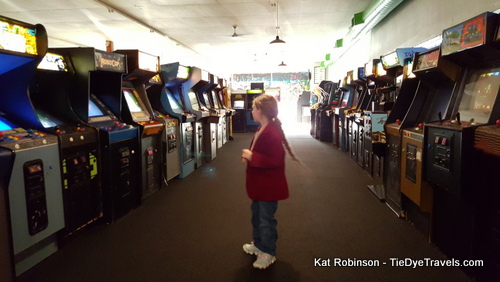 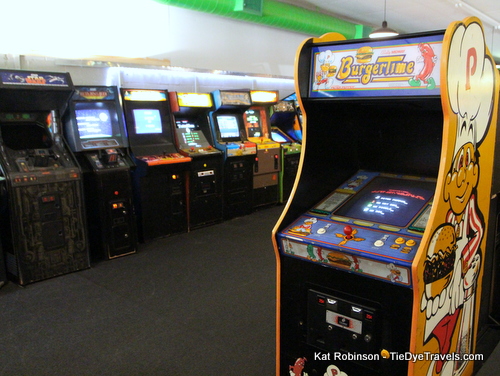 and suddenly it hit me... here's a child of the 21st century, whose previous exposure to video games had been on a laptop computer or phone.  The idea of a video game console, like a wall-mounted telephone or an eight track tape player, was foreign.

Well, almost foreign.  After all, Hunter's favorite films are those of the Back to the Future trilogy. 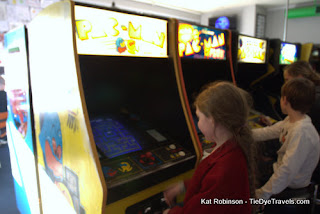 We walked around for ages before she came back to Pac-Man, which is in many ways the gateway drug for console players.  And she gave it a shot.

Now, Arkadia Retrocade has been around about three and a half years ago.  Opened October 15th of 2012, it's become a great place to lose yourself in the 1980s. 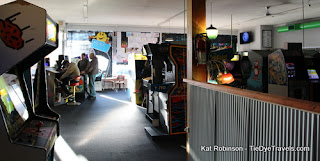 Shea Mathis spent a year collecting more than 75 different games to create this den.  The $5 is all you pay - all the games are free, and you can play from open to close.  If you have to leave for lunch or a break, you can get your hand stamped and come back in.

Sounds very, very simple.  And it is.  I mean, really simple. 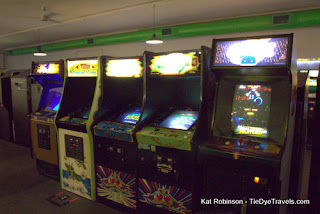 I was quite thrilled with all my old favorites evident -- Galaga, which I apparently still have the fingers for; Ms. Pac-Man, which, sadly, I don't; arcade Tetris and its small portion of the screen; Q-Bert and those little unintelligible swear bubbles; even a tabletop console of Frogger. 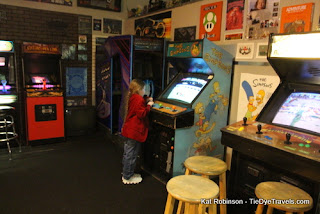 But for Hunter, it took a bit more.  She was less pleased with trying to shoot as fast as possible at things (a hallmark of many early games) and was far more taken with rollers (racecar games) and boss fights.  Once she figured out her niche, though, she spent a great deal of time tackling the surprisingly not dated battles in The Simpsons: The Game (with early Matt Groening characters like Bongo, to my surprise). 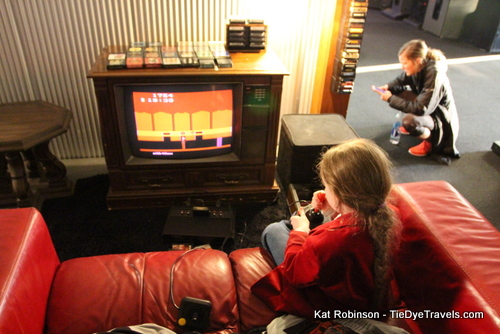 But there was more.  After her initial shock and awe of so many games in one place, we sat down on a red couch and grabbed joysticks to experience the original home gaming experience - Atari.  The collection of games is substantial, with dozens to choose from (including Pitfall, an old favorite of mine!). 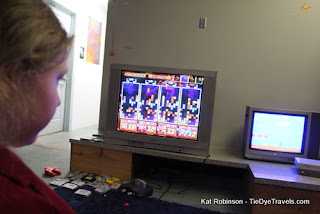 And in the back, there were so many other consoles, including the original Nintendo Game System.  I thought I was introducing her to something remarkable when I started up Super Mario Bros. (paired with Duck Hunt).  I was chattering on about how my best friend Jerry and I spent hours upon hours mastering each level, when she informed me she's played Mario 8.  EIGHT?  What? 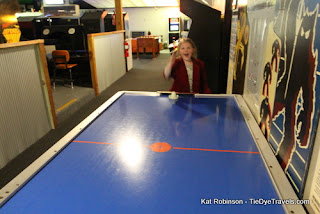 We also took on some non-electronic competition in the form of air hockey, one of her favorites.  Foosball and board games were also all over the place. 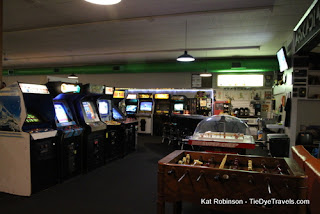 There is a snack counter at Arkadia Retrocade in the back, but it only offers sodas and candy bars.  For a generation raised on Red Bull like my brother's, that'd have been disappointing, but it was perfect here.

Everything about Arkadia Retrocade screams 80s, or at least a version of it we all seem to be grasping at.  There are posters from movies and TV shows from the period, and the music overhead is tinged with 80s riffs, but it's Daft Punk and Com Truise instead of Duran Duran and Culture Club.  It's like a hazy memory of those great times. 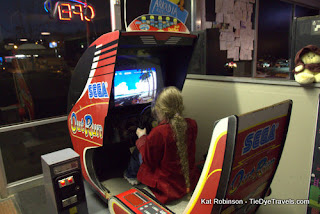 Fortunately for us old farts, there are stools to move about and sit upon while such games are enjoyed.

We spent three hours in the arcade, pretty much killing our opportunity of doing anything else this particular Thursday night, but it didn't matter.  The two things that finally convinced us it was time to go were our growling bellies, and once we were dining on pizza at Wood Stone Craft Pizza the exhaustion caught up to us. 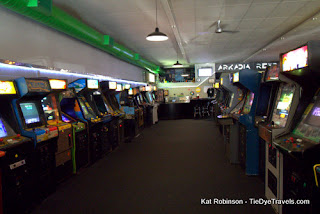 If you'd like to while away your hours in the 1980s, head to Fayetteville.  Arkadia Retrocade is located off US Highway 71B in the Ozark Natural Foods shopping center.  Learn more at the arcade's Facebook page. 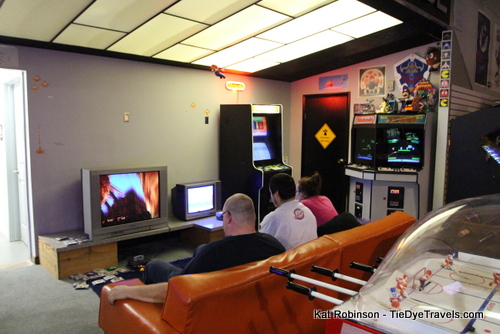 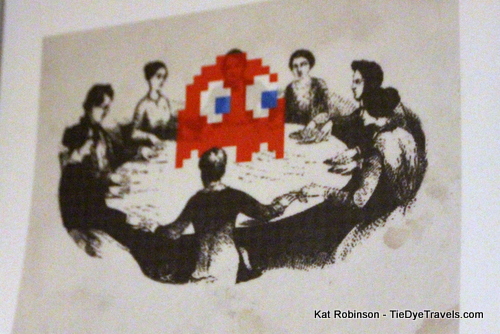