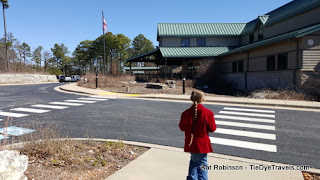 Hunter and I decided our Saturday morning would begin with an adventure at this state park near Rogers on our epic road trip along US Highway 71 from the Louisiana border to the Missouri State Line. It's one of the state parks my daughter hasn't visited, and I knew she'd have a great time.  But I wasn't certain what'd be out to see in the woods, since it was so early in the season.

We were surprised to see a crowd - including school buses and lots and lots of cars.  There's a lot going on during the weekends at Hobbs, we're guessing. 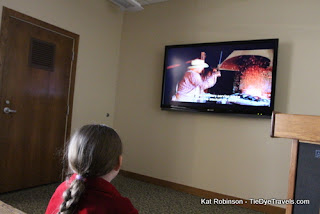 When we entered, one of the great state parks folks working that day suggested we sit in on a film that talks about the park's history and how it came to be.

On the way out to the park, Hunter had mentioned it was great we were going out into the untouched woods.  But this isn't pristine land.  In fact, for a long time, its pines and hardwoods were harvested for the first steam-powered lumber mill in the state. 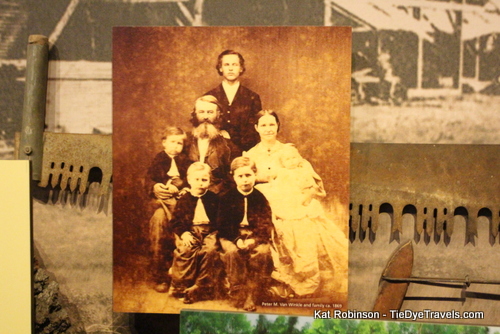 Wagon maker Peter Van Winkle purchased this land back in the 19th century for its timber, and he became the largest lumber producer in the area. The wood from his mill was used over several counties and in many structures, including the Old Main building at the University of Arkansas in Fayetteville.  The roads that were cut to move that lumber from tree to market became many of the main roads still used in northwest Arkansas. 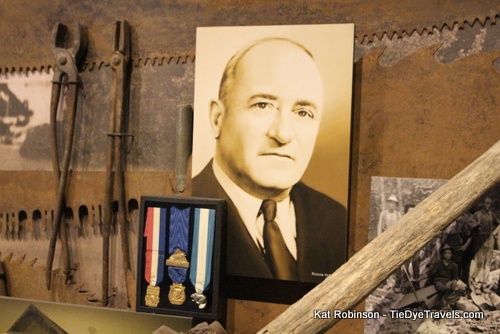 After Van Winkle died, his heirs lost much of the land.  Some of it was bought by Roscoe Hobbs to supply his tie and timber company, the Hobbs-Western Tie Company, in 1928.  He later purchased the Van Winkle estate in the 1940s.  When he died in 1965, his estate gave the first option to purchase the land to the state, but lacking funds, it wasn’t bought.  The Nature Conservancy finally bought the land in 1979, and later that year it became Hobbs Conservation area.  It received its new name in 2002 and became Hobbs State Park Conservation Area, and its 12,056 acres is run jointly by Arkansas State Parks, the Arkansas Natural Heritage Commission, and Arkansas Game and Fish. 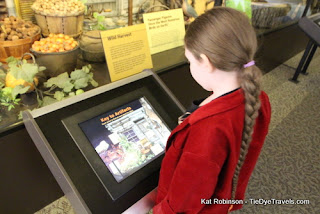 Hunter was anxious to get to the exhibits, and so the next stop was a display sharing the bounty of the land - or, rather, how people survived when this woods was wild, on acorns and hickory nuts and by harvesting venison and other wildlife.  Hunter balked a little at the display of the shot deer, but I explained to her that even today there is hunting in Arkansas and that many people here still rely on the deer harvest to supply their freezers and family with meals throughout the year - and that we had benefited from venison ourselves. 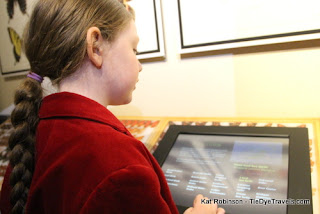 Hunter was particularly fascinated with a display that talked about the different reptiles that lived in the forest around the visitors center. In fact, she was also taken with other kiosks of information talking about the different sort of land varieties were included in the land encompassed by Hobbs State Park. 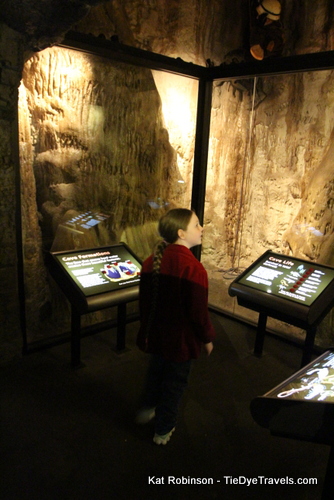 But her favorite part by far had to be the bat exhibit, which included a reconstruction of a cave where bats live and explanations on how they live in the subterranean caves that pocket the park.

When we had finished exploring the exhibits in the museum, we came out to find one of the folks at the state park explaining to a couple the way you can tell if the shedded skin of a snake came from a poisonous snake or a non-poisonous one. There was also a table set up showing different items from the woods you might find in your own yard, from pine cones to oak galls. 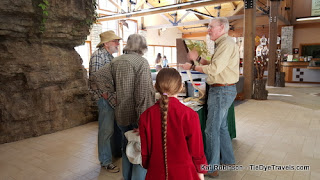 The park’s 17,531 square foot visitor’s center, opened in 2008, is a LEED certified building, dedicated to the ideas of environmental friendliness.  You’ll see it in the recycled materials for the building, in its material waste collections 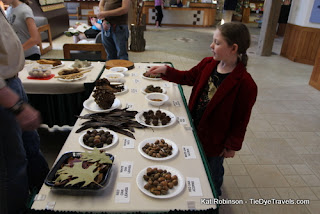 and in its use of natural light.  It has a geothermal heating and cooling system and was constructed with fly ash recycled into its concrete. It's a cheerful place, and it was packed that day. A class was about to begin, but Hunter really wanted to see what was outside. 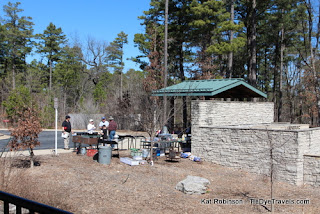 The moment we walked outside, we were struck by the scent of sweets. Turns out, the park had hosted a Dutch oven cooking demonstration featuring cobblers that day. Several of the participants were still on hand answering questions, and they shared the fruits of their labors, so to speak. As 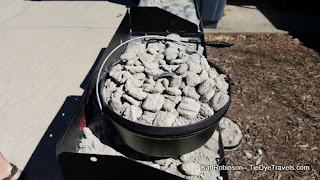 Hunter and I tried peach and cherry cobblers and beer bread, we heard about the Dutch oven's history and its rightful place as Arkansas's official cooking vessel. 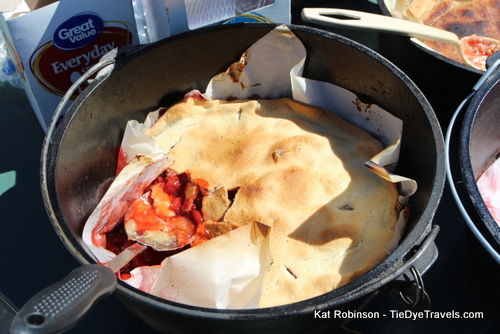 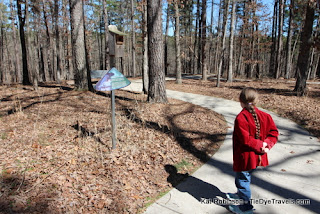 Beyond the demonstration lay the start of a trail, which we explored. This short paved trail is the Ozark Plateau Trail, and it makes a circle along the ridge north of the visitors center. We spotted trees, both live and downed; mushrooms growing on logs and lichen on rocks; footprints of animals preserved in the concrete; other walkers as well, some with pets. 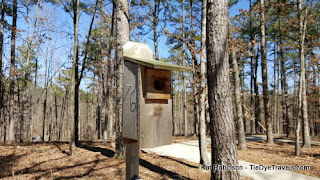 We learned that Eastern Bluebirds nest in hollow trees, and in bird boxes like this one made by volunteers.

The land within the borders at Hobbs includes ridges and valleys, hilltops and hollows, densely 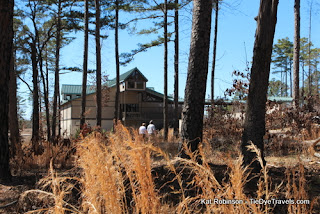 forested areas of oak and hickory trees and pine breaks.  Water running across the fragile limestone through the area has created springs, streams and seeps in the lush undergrowth. 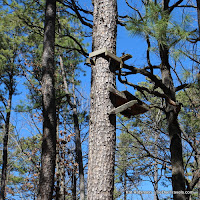 I had to convince Hunter that this actually was an old deer stand. It doesn't look like the duck stands she's visited in the Arkansas Delta, and she hasn't gone deer hunting before, so the idea of perching on a couple of boards in a tree waiting for a deer to come by is foreign to her. 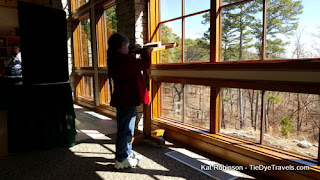 Later, we returned to the visitors center for a drink from the water fountain and a glimpse out into the woods with binoculars from the lofty heights of the main seating area.

Hunter then sat down and colored with new- 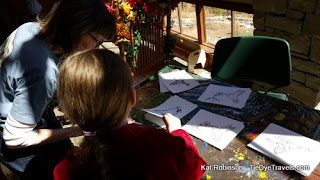 found friends for a while before we decided to head to our next destination.

There are lots of kids activities planned at Hobbs State Park and Conservation Area throughout the year, and school groups are welcome.   It’s also the only Arkansas State Park where limited hunting is allowed, and it’s the only place in the whole state with a public outdoor shooting range with a bullet trap (it’s closed on Mondays for maintenance).