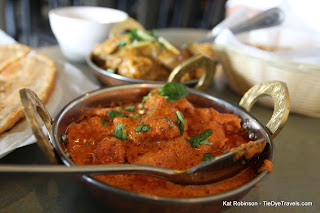 For the record, it's all Jon's fault.  Our friend Jon found a little joint tucked in by Hibernia that had just opened.  He told our friend Marvin, and took Marvin and several of our other friends, and Marvin sang its praises to us, which got Grav to thinking about it on his trip back from Fort Smith, which meant I needed to drop everything and have a leisurely lunch... at Shalimar.

That is the sort of way good restaurants are found when there aren't people blogging and writing about these places... and, if this were a decade ago, that's exactly how you might have found it.  But of course, you have me.  And Grav.  And Marvin and all our friends and Jon.  Because it's his fault.

And what a delicious fault it is. 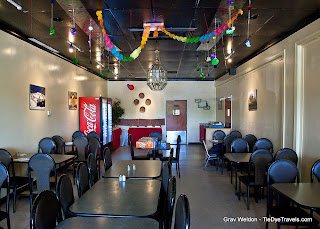 Now, first thing you need to know is that this isn't Indian food.  It may look and smell like what you've come to know Indian food to be, but it is not.  It is Pakistani.  Better than that, it's not American-style Pakistani.  It's Pakistani home cooking.  The guy who runs the place with his wife came to Arkansas two and a half years ago, and they took over the space next to the Halal market about a month and a half ago.  Yes, there was a Shalimar earlier than that.  It's different now.  Run by different folks... the folks that were running it were the folks running the Halal market. It was just a bit too much.

So first thing you need to know... do not go to Shalimar expecting an express lunch.  Homer's at the other end of the same shopping center can offer you that.  Shalimar is not fast food.  Because I have a flexible schedule, I could afford to spend the more than an hour-and-a-half we spent inside its beige and black interior. It was a good time to do so.  Grav and I caught up on stuff from being apart a few days, compared notes, talked about our upcoming assignments.  That was good. 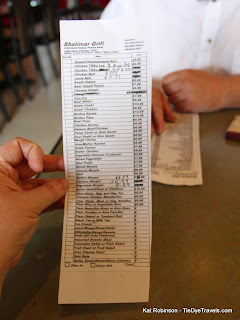 Second thing to know... don't expect a thick menu.  The slip of paper that's handed to you when you walk in the door better resembles a sushi order form than a proper menu, but all the basics are there. Some of the names may look familiar.  Some may not.  That's OK.

Third thing to know... because it's not an American-Pakistani restaurant, rice doesn't come with everything.  That's a custom we have here, but isn't everywhere.  Rice is a dish.  You can have plain rice or vegetable rice or a biryani, but you order it separately.  While we were dining, there were three men who came in and ordered just biryanis and

they were HUGE. The biryanis, not the men.

Fourth thing to know... and this is where we get to what we ate... tea is served cold, not iced.  I like that, actually.  Grav's eyes widened when we were brought our glasses, but I dug it.  Our southern culture of iced tea (usually sweetened) is an American thing... cold beverages aren't served iced in a good number of cultures. 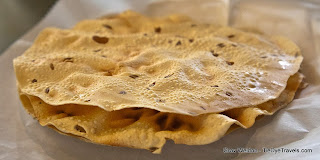 Our kindly host brought us cumin-speckled naan with a red sauce that wasn't a chutney and wasn't tamarind sauce... but was slightly sweet and salty.  Grav asked for a mint chutney and got a lovely green, frothy sauce 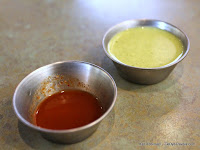 to go with it.

A while later, once we'd caught up sharing our notes about the storm and what's been going on with our families, our breads arrived.  He had chosen garlic naan, which was plenty garlicky in itself with large, visible pieces of garlic on the surface.  It came with a creamy white sauce that bore a striking 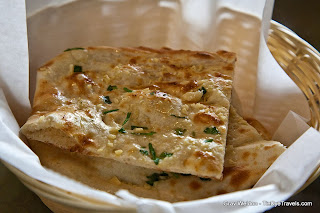 resemblance to a strong garlic ranch dressing.  It was pliant and strong.

I wanted paratha bread, and went for the Aloo Paratha, tiny chunks of spiced potato baked into sheets of whole wheat flatbread, served with a sauce similar to sour cream.  Grav pronounced this addictive. We quickly learned to pick it up by folding it over first, to keep the potato from falling out. 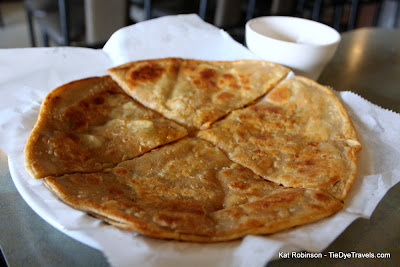 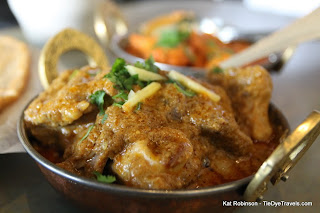 Then came the curries... Butter Chicken and Mutton Korma.  Unlike many of other Pakistani and Indian encounters over the years, the dishes were singular... as in, it was very obvious to us both that each had been carefully crafted on its own merits, small-batched, spiced just to that dish's attributes.  No canned sauces, that's for dang sure.  The mutton was spiced with cardamom (we encountered several whole green cardamom in the gravy) and was still on the bone with all its succulent marrows.  Indeed, I did find myself sucking out every marrow I could, and savoring the tendons that had been left intact between the bones.  The mutton was tender as a pot roast.  It was divine. 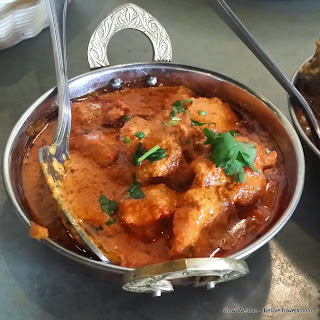 Still, it somehow paled in comparison to the Butter Chicken, which Grav and I both agreed was the best either of us have ever had.  It tasted like butter.  And chicken.  And curry, oh so many delightful notes of fenugreek and coriander and onion and... okay, this is where I get my mid-Asian geek on.  This was scratch made.  I imagine the whole spices were toasted first.  I am pretty sure the onions were fried in ghee.  I've 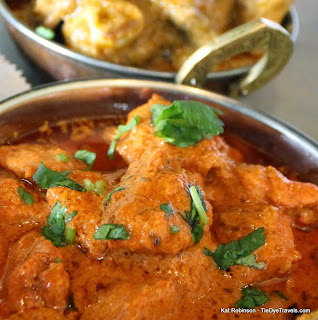 studied this cuisine (yes, because that's the sort of thing I do) and its 15th and 16th century predecessors. Forget outside influence.  This was a genuine Pakistani dish made by a Pakistani cook who knew exactly what she was doing and who took the time to make it just for us.  And if you only needed one reason to go to Shalimar, this is it.

Our rice came a few minute later... a vegetable 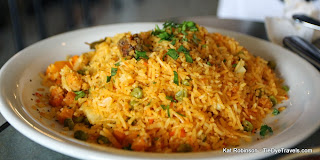 biryani gorgeously dyed yellow with turmeric, containing bits of cauliflower, peas and carrots within.  By itself, this would be a sustaining lunch. Paired with the curries it was gilding the lily. 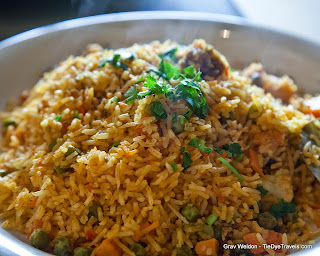 Grav saved my fat butt on this one.  I would have continued to eat and talk all afternoon, but when we were offered a box he jumped at the chance, and it's best he did.  We didn't get to sample desserts, but I suspect we will come the weekend... since Shalimar is offering a buffet on Fridays, Saturdays and Sundays at lunch for $9.95.  Of course we'll be back.

Which is where I come back to Jon... since, as we were talking with the manager, he mentioned how people kept coming back in groups after coming by themselves.  And when he described our tall friend Jon, we knew EXACTLY who to blame for us finding this place.  Thanks, Jon.  We have a new addiction now.