This Is The Juan That You Want - Lunch at Amigo Juan. 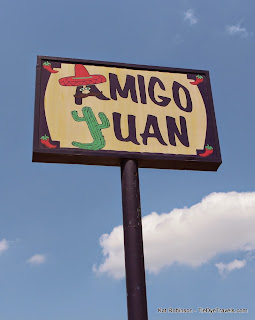 Sunday lunches can be hard to find.  Many restaurant owners and managers choose to close for the Sabbath, while others bring in heavy post-church crowds.  At Amigo Juan's in Hope this past Sunday, we were lucky to find a parking spot.

The restaurant alongside North Hervey Street is bright and colorful, just like the three other locations (Texarkana, New Boston and Atlanta, all in Texas) and on this particular Sunday there was a ten minute wait to get in the door.  We marveled at the Great Danes captured in brightly colored 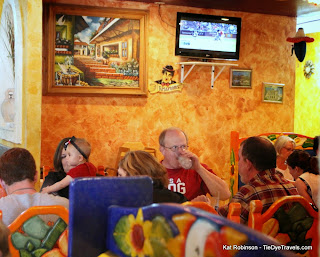 porcelain in the entranceway and the neverending bursts of color throughout the restaurant.  It wasn't long before Grav, Hunter and I were shown to a booth, where we dallied a little before placing our appetizer order.

Amigo Juan was originally opened by Sergio and Maria Rodriguez in 2003 in Texarkana.  The couple fell in love when they were 16 and 15, respectively, in Chihuahua, Mexico.  Shortly before they married, Sergio came to Arkansas to stay with Maria's relatives, and they decided to make a home here.  Their restaurants feature family recipes and they've been quite successful, which is why there are four Amigo Juans today. 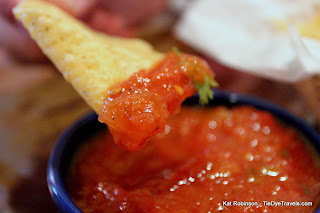 We came in hungry, very hungry, and decided to order the Botanas Platter and then wait to get our own separate dishes.  We were greeted with rich, fresh and chunky red salsa and bright yellow chips (there were even bright green chips, but Hunter claimed them all) which were quickly 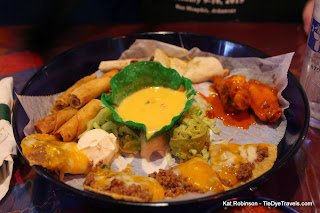 The Botanas Platter seemed a good bet, and it had a little bit of everything on it.  There was a small quesadilla packed with nicely grilled chicken that had a lot of flavor to it.  There were both corn tortilla taquitoes and flour tortilla 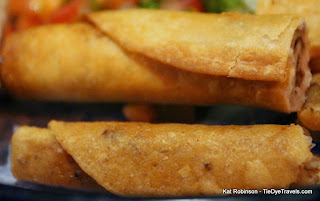 There were nachos... which were created in the manner I recall them being served when I was growing up.  No pile of chips with dumped-on toppings here -- each of these were sculpted bites of ground beef, beans and 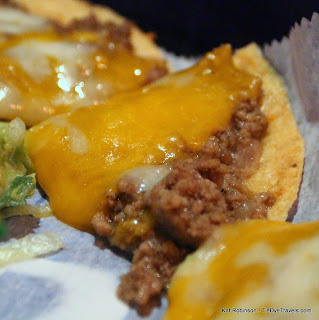 And there were the wings... Caliente Wings, to be exact.  They were exactly what was stated on the menu -- very hot, almost Buffalo-like soaked chicken winglets doused in an incredibly pungent and hot sauce.  I couldn't handle them, but Grav was pleased. 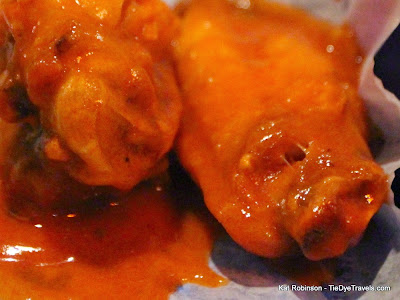 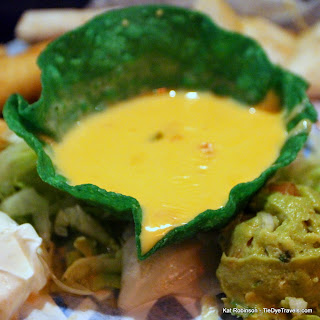 In the center of it all was a green tortilla bowl filled with golden yellow cheese dip, which we eagerly set chips and fries to (I ordered the fries, which came out crispy).  There were also scoops of sour cream and guacamole and a bed of lettuce with pico de gallo on the side.

With this feast in front of us, we wondered if we needed anything else, but went ahead and ordered anyway.  Hunter's choice 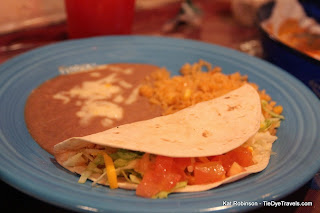 of a soft taco came to the table packed with tomatoes, beef, lettuce and cheese with a pool of refried beans she immediately consumed and a portion of Spanish rice she also liked.  But she made us a deal.  She really, really wanted that green bowl with its remainder of yellow cheese dip, so when her taco was gone, she dug into that, too.  Her meal also came with a drink and a free toy or ice cream... but she forgot to ask for either one at the end of the meal.  Please don't remind her of this... we'll have to drive to Hope and pick up a toy and for heaven's sake... 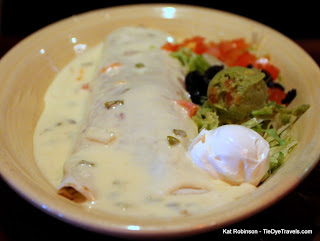 Grav's choice was the Supreme Bean Burrito.  I questioned him about this, equally concerned about his lack of protein in his entree and the state of the car we'd be traveling in over the next hour and a half or so.  He assured me his gustatory additives to our enclosed environment on our homeward push would 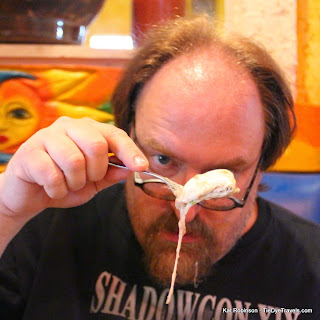 not cause olfactory concern.

I thought it looked grand, coated in queso blanco and stuffed with beans, cheese, lettuce and tomato. He pronounced it adequate.

I think he was just jealous of what I'd ordered.

Also, it was very, very cheesy. 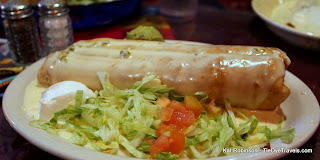 I went for the Chimichanga Grande, and got a rather large, tubular protrusion upon my plate, a golden cylinder guilded with queso blanco that touched both rims of an oblong platter.  Inside, steak chunks, beans and 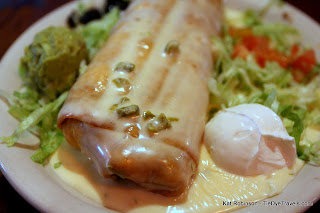 cheese packed the length of the monster.  I did wish I'd have chosen the sour cream sauce instead of the heavier queso blanco (red sauce and yellow cheese dip are the other options) but I was still mightily pleased.

As you might imagine, this was far more food than we could handle.  It was marvelous, but I regretted that I didn't have room for sopapillas, since the ones I saw delivered to a nearby table looked incredible.  Maybe next time. 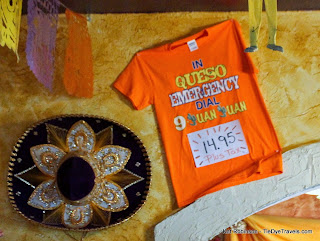