Burger Joint of the Week: The Hive at 21c Museum Hotel. 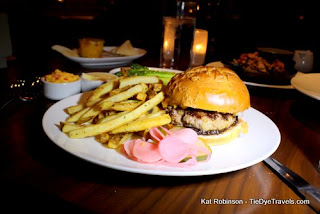 Art galleries and major museums are fantastic facilities for observing the visual arts; but often the fare served in the obligatory café or restaurant within fails to achieve such lofty aspirations.

Fortunately, The Hive at the new 21c Museum Hotel in Bentonville exceeds the expectation.  That matters doubly for the house burger.

Chef Matt McClure’s upstart restaurant within the just-opened upscale lodging option just off Bentonville, AR’s downtown square is part SoHo chic, part downhome kitchen and all celebration, McClure, formerly of Little Rock’s Ashley’s at the Capital and Capital Bar and Grill, is doing what he can to bring organic and local foods to an escalated elevation.  The dishes range from house-tempered ham-brined pork chops to naughty things done with rabbits to rurally-inspired strawberry shortcake served Arkansas-style – that is, fresh berries and unsweetened cream over pulled-apart biscuits.

But it is in the burger that McClure may have achieved early greatness… because it’s possible he’s hit on the best burger in Arkansas ON HIS FIRST TRY.

A little background.  McClure’s tenure at the Capital Hotel in Little Rock included this writer’s experience with the Capital Bar and Grill’s entry in the burger wars, The Burger.  At that writing, I had savored none finer than the house-chopped sirloin burger under a pimento cheese cap with marvelous cucumber pickles. 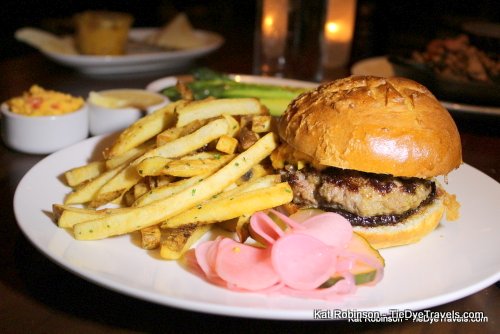 But that changes with The Hive Burger, a simple affair served up for both lunch and dinner, tucked amongst the frou-frou dishes.  This is a burger that could define the 21st century of Arkansas burger love.

Let’s start with the meat and the fire.  McClure’s burger is house-ground, but rather than the sirloin favored at his past employer, this one is made from ground brisket.  The seasoning is light enough to barely even be present – just a sampling of salt and pepper.  The flavor comes from the exposure – from direct flame.  Make no mistake – this isn’t a Burger King affair.  The hot grill behind the kitchen wall is powered with hickory – and nothing else, no coal or gas or electric heating element.  The fire is stoked and the meat is lightly smacked onto the grill, tended and watched until it reaches the perfect doneness. 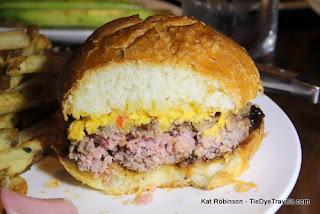 Brought off the flames, the plump patty is placed on a yellow potato bun baked within a two day period right in the hotel, smeared with real butter and toasted.  It’s matched with pimento cheese – this version, one that Chef McClure has come up with himself with a very lightly aged Cheddar, house roasted red peppers and a dollop of Sriracha for a very late bite of heat.  Below the patty, the bun is smeared with an Arkansas-style almost-smooth sweet tomato jam.  The remaining items are served on the side – a blend of pickles made on-site from cucumbers, onions and root vegetables, piquant and slightly sweet.

McClure serves the burger with perfectly cooked fries – sliced, poached and then fried and sprinkled very lightly with salt for the absolute perfect consistency. 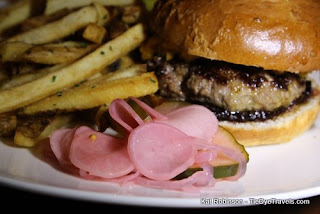 The verdict?  The Hive Burger is impossibly juicy, a dance, a counterpoint, a marvelous thing.  Or to interpret it in a more succinct fashion, the darn thing is tasty.  It has just enough smoke to ensure the visual pedigree of flame-roasting without the ashy gunk of an overcooked patty, and the cheese and condiments are perfectly paired.