4 New Foods to Try at the Greek Food Festival. 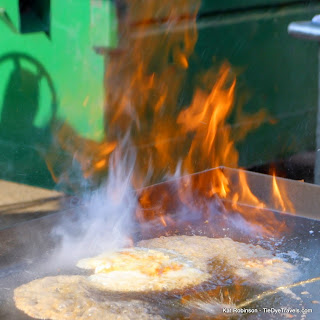 The International Greek Food Festival at the Annunciation Greek Orthodox Church here in Little Rock has been a favorite of mine since I was a kid.  I recall many May Saturdays over the years where dancing was observed, exotic goods were shopped and gyros were consumed.  This being its 31st year, I've already made my plans to go out and enjoy the fun the weekend of May 15-17.

This time around, though, there are four new foods you should try.  I was one of a few lucky folks who got to go to the church Wednesday night and see what's in store for this year.  Here's a preview. 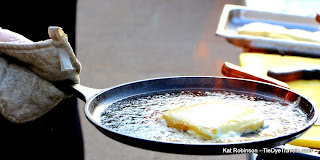 1.  Saganaki.  Flaming cheese, oh boy.  In this case, slices of Kasseri cheese (made from sheep's milk) are griddle-seared and flamed before being laid across grilled pita bread.  It's all the joy of fondue without the stick and dip, and it's fun to watch. 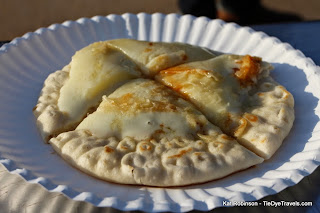 What did I think?  I think I'd like to eat hot Kasseri cheese all day long.  I could wear it like an edible glove of cheese.  Someone's probably already thought of that, though.  It has a great farmer's cheese flavor, slightly salty, that's enhanced by melting.  The pita's just there to get it into your mouth... which, as Grav can attest, is absolutely necessary.

If you want to try saganaki, you'll want to get out there Friday.  Just 800 pounds of the kassari have been brought in... it'll never be enough for me... er, for cheese lovers.  I think Steve Shuler of Little Rock Foodcast agrees with me on this one. 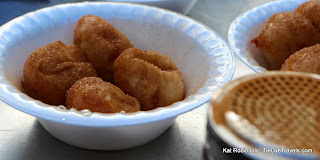 2,  Loukoumathes.  These are essentially cinnamon dusted, honey dunked doughnut holes.  The machine to make these was specially created in Seattle and shipped to Arkansas.  It's a lot of fun to watch... but it has to be done with care, since the oil for frying is well over 300 degrees and you have to make sure the balls aren't too large or too small. 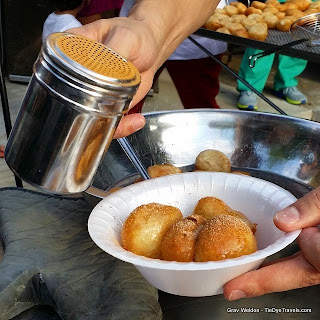 Loukoumethes have been around for more than two thousand years.  They were "golden pennies" given to the winners of the original Olympic games.  They are similar to the sticky buns that would be brought to weddings by guests and piled up for the happy couple to attempt to kiss over (the predecessor to the wedding cake) and they are easily poppable.

My thoughts?  Wow.  The dough is barely sweet at all, but the honey is really sweet, so you get a balance.  When they're hot, it's hard not to gobble everything up.  When they cool, they aren't quite as good but chances are, you won't have the chance to try them cold.  They'll go quick.  A nice new addition to the fare. 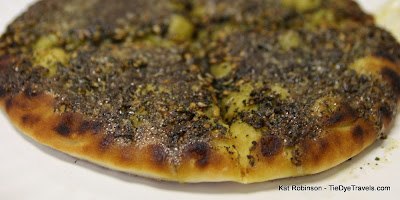 3.  Za'atar Pizza.  This is a leavened flatbread that's been dolloped with a pesto-like substance (za'atar) that includes dried oregano, sumac, sesame seeds and other herbs in an olive oil base.  It's very simple. 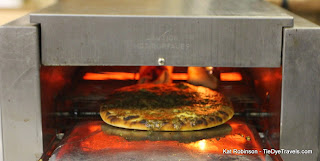 What did I think?  I have had similar dishes of herbs on flatbread, and this is pretty representative of that.  I also have a pretty broad palate.  The flavor is unique and it's tasty but a little wild for those used to milder foods.  The texture is rather twiggy, but if that does not bother you then you will certainly like this. 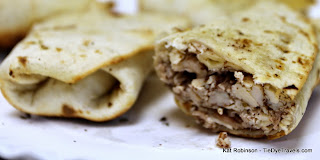 4.  Mediterranean Chicken Wraps.  These are exactly what they're said to be.  They look like burritos but they're filled with grilled chicken cooked in Mediterranean spices and olive oil.  If you're looking for a good carry-around food but don't want a gyro, this is the way to go.

What did I think?  Tasty.  I could make a meal of these.  The chicken is succulent and I could see Hunter digging it.  Just be careful - they are extra juicy inside. 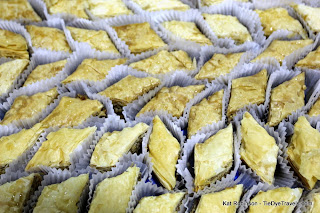 The International Greek Food Festival is just over a week away.  Make your plans now by checking out the event website.  It's free to the public.  Also, my advice is to get your pastries early... though there will be 25,000 individual pieces of baklava, sourota and those delectable wedding cookies, there are never any left over at the end of the event.

One more thing -- do remember that the Greek Food Festival is, as far as I know, the only Arkansas food festival with its very own drive-thru!  So really, even if you don't have time to enjoy the dancing, activities and excellent shopping, you can still have your Greek fix.
To purchase this article, email Kat Robinson at 5/07/2015 02:15:00 PM