A Craving for Alcenia's Finally Satisfied. 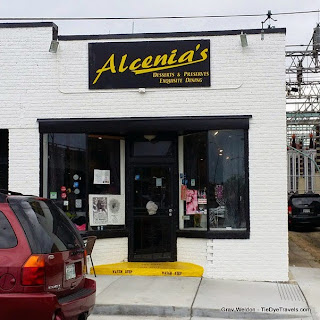 January 2008.  I was wrapping up my first out-of-state travel assignment in my brand new career as a travel writer.  Sure, it was just Memphis, but the three nights I'd already stayed in Memphis in that tiny little room at the Sleep Inn, checking out the city's downtown on-foot on the first of several no-car travelogues had already shown me I had a whole lot of learning to do about my new craft.

I had spent a good deal of time walking.  I had ridden the trolley.  I had tried not to freak out too much walking Beale Street by myself.  I found museums and fledgling little sushi places where cute guys tried to hit on me despite the wedding ring.  I gulped down my fear of traveling solo.

And then I found Alcenia's.

Long before the Today Show or Guy Fieri or Roadfood found Alcenia's, I was on the doorstep of a little shop just north of Interstate 40 on Main Street.  I was tired and hungry, and BJ took me in. 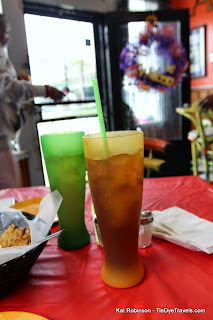 You can read about that experience here... yes, these were the early days of Tie Dye Travels, just a week after receiving my new fangled Nikon P50 camera, a massive improvement over my old Fuji Finepix, and I was enthralled and delighted with this little soul food cafe.  Indeed, it was better than any Memphis barbecue joint I'd visited, and it just blew me away.

Seven years have passed.  I've had a child, a travel writing career, a state job, a divorce, three books, a couple of epiphanies and a new chance at writing for a living again.  I have passed through Memphis time and time again.  And either I haven't had time to stop, or I've come on a Sunday or a Monday.  I haven't had time to return to Alcenia's.

I have bragged on it.  I have shared tales.  I have coerced others to try the place.  I have regaled Grav with story after story of the marvelous fried chicken, the candied yams, the ghetto-sweet KoolAid.  And finally, on a brisk April day, in the shadow of the then-soon-to-open Bass Pro Shops at the Pyramid, we parked out front and entered the cast iron gate. 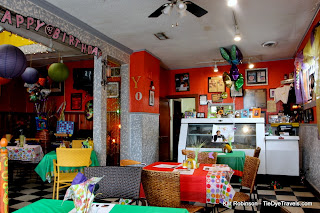 This time, the restaurant was occupied.  There were diners at several tables.  Moreover, there were new articles on the wall, in what free spaces were allowed, and photos of famous folks smiling out by the register.  It was very clear that Alcenia's has moved up in the world. 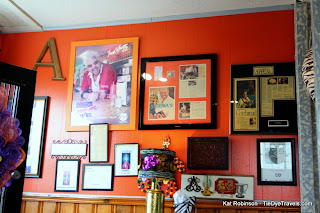 And I got there first.  I beamed, hoping that the little blog entry I'd penned seven years earlier had helped others discover the eatery.

BJ was chatting away with customers.  She just kept going, greeting us each as we came in, waving her hand towards where to sit 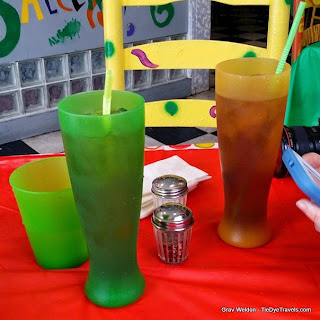 after getting a hug from everyone.  She let us know that she had everything and chuckled when I asked if it'd be heresy to choose unsweet tea ("no, honey, you're not the only one") and made us feel like we'd been family forever.

We were just going to get lunch, but the scent of green tomatoes frying in the back were too much to handle, so Grav walked back and asked if an order could be added. 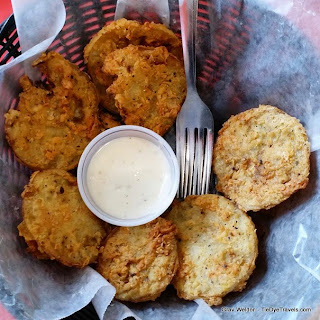 Unlike so many places we've been, these weren't huge slabs of tomato and they sure weren't overbattered and consumed by their own crust.  They were piquant and substantially flavored, 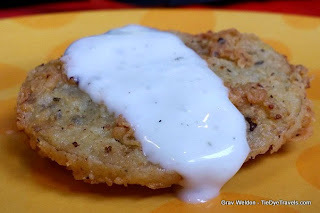 tartness with a crispy, salty pan-fried crust, and with a drizzle of that sauce they were irrefutably good.  As in, we could not refuse a crumb.  I found myself going after the remaining crumbs in the basket with my fingers as soon as they'd disappeared. 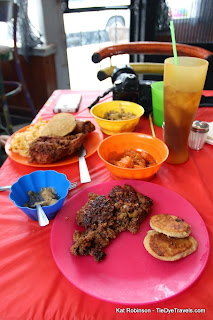 BJ started to bring us plate and bowl after plate and bowl, each brightly colored vessel filled with yet another treasure.  She told me to hang on for my rice and gravy side, saying she wanted to make sure it was good and hot.

Not that we had anything to wait for, other than our photos.  She asked us to post some of what we were taking to her Facebook page, which we did... but so much to post!

Grav had been craving fried chicken since I mentioned how much I liked it at this restaurant, so he had a thigh and a breast of darkly turned pan-fried chicken.  And 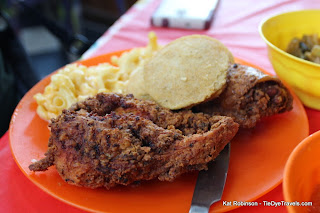 these were good, of course.  I could have told you that.  The breast was even moist and held some of that salty flavor within.

He chose for his sides macaroni and cheese and fried cabbage -- the later of which was a bit sweet as well as buttery.  The mac and cheese was not a 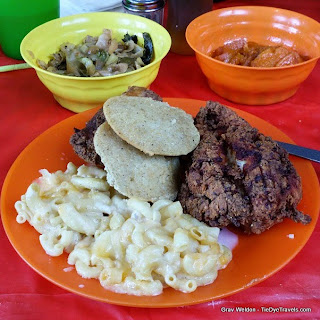 runny custard but instead an ample pile of noodles baked with white cheese.

They came, as mine did, with those hot water rounds of sweet white cornbread.

BJ asked us if we wanted chow-chow (which she pronounces as "cha-cha") and of course we agreed, and its sweet and tangy textured magnificence only added to the cornbread experience.  It 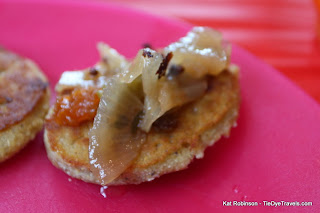 made me want some fresh corn or lima beans to mix it into, frankly.  You can buy yourself a jar now and take it home with you, by the way. 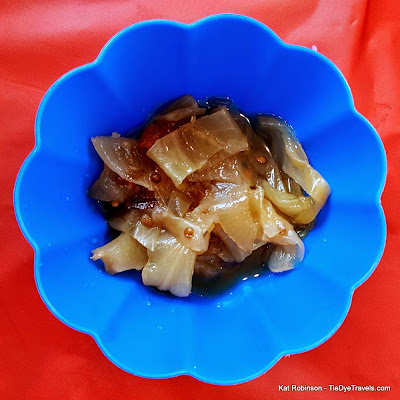 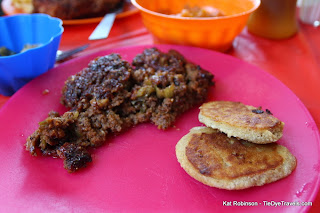 Me?  Though the fried chicken tempted me heartily, I decided to try the meatloaf.  I have been in a meatloaf mood of late.  The meatloaf at Alcenia's is nothing like what you expect from a restaurant.  Instead of a slightly dry slab, it's almost liquified in places, scooped out of a plan and

served on a plate.  The barbecue-like sauce glaze, the low-filler all-beef meatloaf, the hints of black pepper and suggestions of onion, make it all a very hearty (and very filling) entree.  This is the dish you want when it's cold out.

I could not resist the chance to enjoy those candied yams again and I did... each one glowing golden with its high butter and sugar content but I did not care at all.  Calories this good are worth savoring, even if they go right to the waistline.  Really. 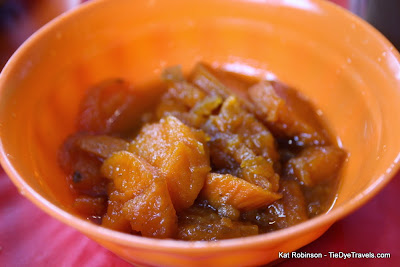 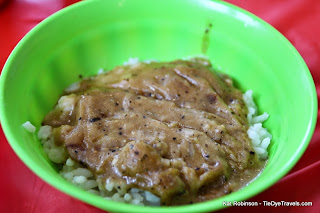 A few minutes later BJ came to the table with the bowl of rice and gravy, one of the other side items.  She was right - it was hot, and it made it all the better, a rich deep standing peppered roux over rice, just like my folks made it when I was a kid.  It was stout and the rice was soft, and Grav about wrestd the bowl from me and proclaimed later that it was the only thing that could have elevated his fried chicken experience. 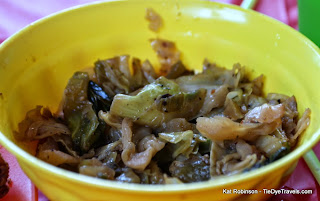 Strangely enough, I have no clue if Alcenia's has dessert.  No idea at all.  It's not listed on the menu, and any meal there will pretty much quell any appetite you bring through the door.  I would suspect anything that came out of BJ's kitchen would be just 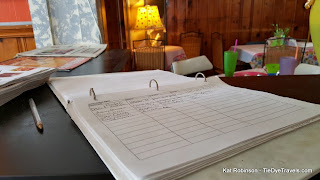 absolutely ridiculous and tasty, but that's just a theory, of course.

What I do know is that eventually, I will have to come for Saturday brunch and try the salmon croquette.  I hear such ardently favorable reviews of the pink seared rounds that I have to schedule a special day just so I can go back.  But my free Saturdays are rarer than hen's teeth, so I'll have to wait.

You don't have to wait on me, though.  Get yourself across the river and to this little place on Main Street, a straight shot from the Pyramid.  This is soul food that really does what it's supposed to do, sooth your soul and make you long for returning many years after you've dined at one of those mismatched tables.

One more note for Guy Fieri... with all the tips I've sent your way, don't you think it's time you took me out to dinner? 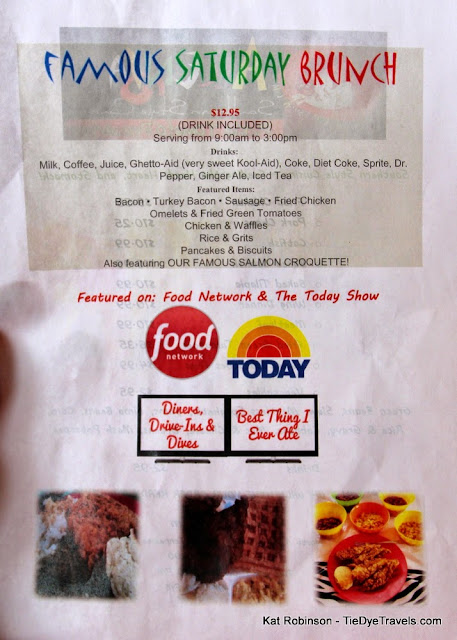 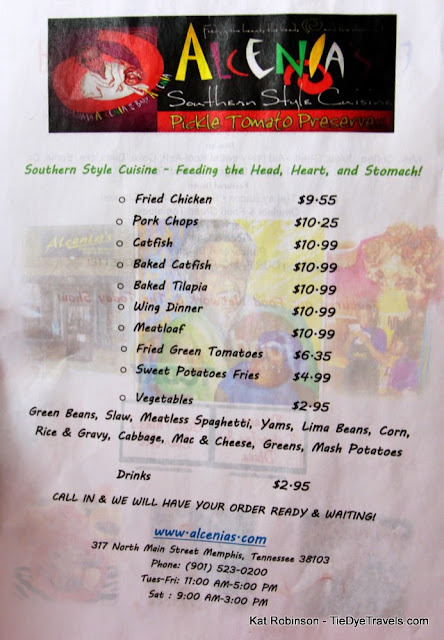