Chef Andre, Johnny Carson and Chocolate Croissants - or, A Quick Bite at Boulevard in the Heights. 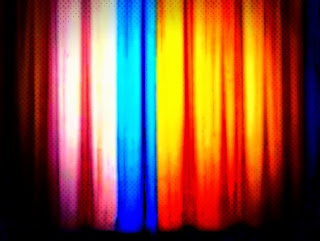 Andre Simon made the first chocolate croissant I ever tasted.

It was May 1992.  I had come home from my first year at Arkansas Tech to spend one more summer in Little Rock, running the carousel at University Mall to put cash in my pocket and spending time with my sometimes best friend, sometimes boyfriend Jerry.  His summer job was at Andre's on Rodney Parham, working in the kitchen.

Jerry would sometimes bring by some of the benefits of working with Andre... usually the corners of round cakes cut from rectangular or square pans.  The exotic things that came from that kitchen... like a cheddar and apple cake, dark chocolate ganache gateau... and chocolate croissants. 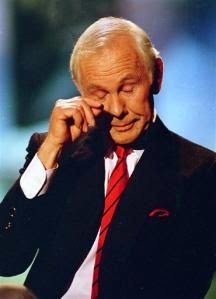 The croissants came the night of the 22nd.  It was Johnny Carson's last night on The Tonight Show, and Jerry had just gotten off work and come by my mom's house.  I believe he'd mentioned to Andre how I was digging the bits of pastry and so the pair of croissants had been given to be delivered. Jerry had to go home, so I sat on the couch alone, watching the end of an era with wet eyes.

That croissant was like nothing in my experience.  I didn't understand the terms so much then, but I do now - how translucent, cottony sheets of slightly salty, slightly sweet dough could come together around a dark, deceptively lightweight and crumbly barely sweet center of the most delicate chocolate I had ever encountered.  By this point in my life I'd taken three years of French and dreamed of going to France for something like this some day.  The golden crescent, a closed spiral of butter-soft wool around that almost pasty center, represented something I had dreamed about but never been able to travel and encounter.

I would go back to Arkansas Tech that August, and make Russellville my home for the next few years.  Before I graduated, Andre would be gone, the victim of a ridiculous, unwarranted shooting at his Hillcrest bistro.  I would be on my way to a future in broadcast - in television, not radio like I had suspected - and I was firmly entrenched in the world of cheap eats.

Today, if I want a chocolate croissant, I have many choices.  I can venture up to Mylo Coffee Company, or at Cafe Brunelle.  I can find a pretty dang good one at any of the Fayetteville-area Arsaga joints.  I've had them at the Paris Casino in Las Vegas and the Leonid Chocolate Cafe in Chicago.  I am drawn to them thanks to that one encounter, so many years ago.

However, it has taken almost 23 years to have that memory fully stirred again.  And why it took this long, I'm not quite certain.

I literally, yes literally, stumbled into Boulevard Bread Company... wait, no, that wasn't it.  Or that is it... I am so confused.  I stumbled through the doors this morning of what was once a tiny little bakery where once Paul Bash spent three hours telling me the story of Jacques and Suzanne's, handing me a pen when I ran out of ink more than an hour in... but this was not that place, was it? 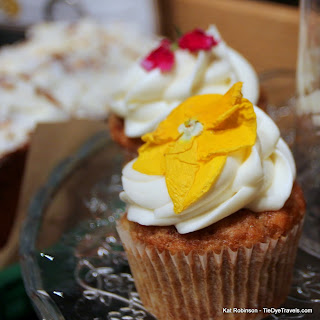 I had come in on a Monday morning after getting little sleep thanks to a hairy run of storm ridges that passed through the state over the course of ten hours or better the night before, after managing to get up and wake my daughter and get her to school somehow on time after spending an hour and a half in traffic returning to Little Rock in the last line of that same storm system, she munching most of the way on pancakes and bacon left over from our trip to the Frontier Diner in Cabot the day before... I knew I would not be able to condense my thoughts into coherent discourses (or cohesive decorative stickers, who knew, I was that far out of it) without the benefit of bean-borne caffeine, and so I rolled on after dropping her off at school into the Heights and into the soggy parking lot of what had been Boulevard Bread. 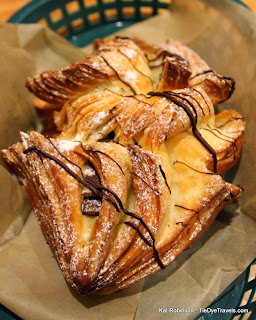 My confusion came from the space to my right, which, without the benefit of caffeine, I could not process.  There were gents of different ages and clothes I could make out at the three tables I remembered to the left, but whatever to the right was all gray and I couldn't get my head around any of it anyway.  All I knew was that there was this lovely lady who said it was okay to be overwhelmed, that she saw that a lot, and would I like some coffee? She even turned me to the pastry case and opened it for me, picking up with a wax paper sheet an item that brought to mind the architecture of the Disney Center in LA... I think, because there had been no coffee administered yet and I was still groggy. 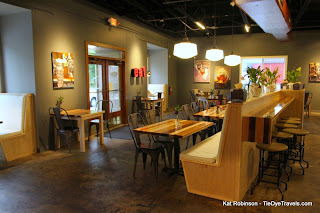 Once the pastry and coffee had been purchased and acquired, I turned for a seat and encountered the gray again... and a table that reminded me very much of the long table in ZaZa... but that couldn't be right, ZaZa was a couple blocks away and hey, tables have 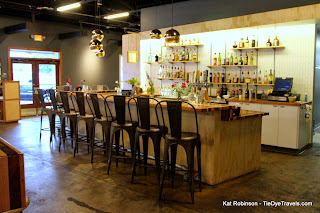 But there was more beyond that, more rooms, more tables, a bar... a bar? and a perfect little vignette that on a day where I wasn't walking comatose I'd have sat for hours and watched the rain fall on Kavanaugh... 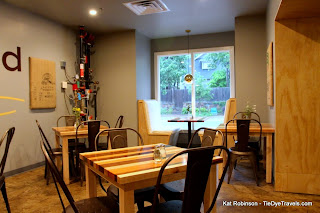 but someone's stuff was there and I settled instead for a small fourtop across the room, around a corner, suddenly self-aware that I wasn't wearing a necklace or scarf and possibly wasn't in makeup.  I was pretty sure I'd at least brushed my hair.

I was at least conscious enough to take my photos.  These days, that's almost automatic. 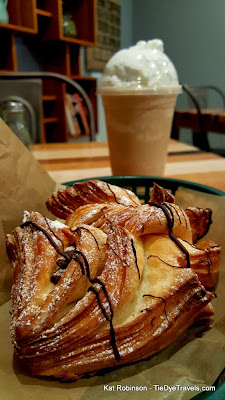 Even then, I sorta stared at what I'd gotten, trying to let my brain process it all.  I'd been alert in the car, I knew.  Maybe the driving in rain and heavy traffic had taxed my mental resources, I didn't know.  I just knew hey, there's a pastry and oh gawd, I got a frou frou coffee instead of straight up black, I must have been off.

I stopped, did my best to snap myself out of it, and had a drink.  That was a good call -- okay, real whipped cream, real foam, crushed ice, espresso, no sugar.  I could deal with the Anti-Frappuccino (no, really, that's what it's called) and that made me happy.  Now, onto this... chocolate croissant? 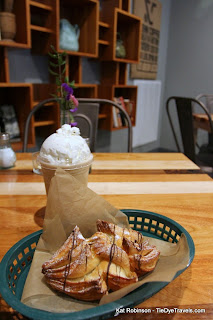 croissant.   It wasn't crescent-shapped, which is what gives the croissant its name.  But most those I'd had in recent times were either tubular like at Arsaga or almost round puffs like at Mylo... so, whatever.  No, this one swept up into tiny affixed golden waves.

And then I bit into it, and I was once again sitting on that sofa, eating a rolled croissant from a little Styrofoam tray and watching Carson sitting on a stool.

I thought maybe I'd fallen back asleep for a moment.  Another slug of frou frou coffee beverage fixed that.

But yeah, it was.  The light, translucent layers.  The dark, barely sweet chocolate filling.  It may not have been the same shape, but it was the closest thing I had ever had to that first time.  And you always remember that first time, right? 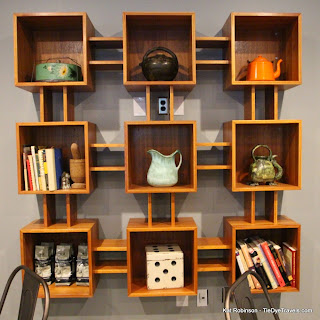 I looked around at this new, clean, beautiful interior of this... bar?  Bistro?  Cavern?  This really great space with such a great design, so comfortable... I looked around, and I thought about Chef Andre. And I wondered for a moment what he might have thought of all of this.  And I wondered if somehow Boulevard had the exact same chocolate, or a similar recipe, to Andre's croissants.

And I regretted all the work I had to accomplish the rest of the day, and the fact I wouldn't be able to savor for much longer the essence of that moment.  Because for a while there, I've been trying to reconcile a new, changed food landscape in this town I grew up in, a landscape being molded before my eyes and faster than I can hope to document it, while I'm busy trying to recapture and document the history of how it all came to be. 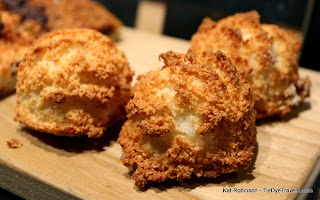 I haven't been as good as I should be about keeping up with everyone else's food blogs lately, but I do know there's a lot of buzz for this place.  It's certainly justified, just as it has been for a myriad of recently opened works of art that are elevating Little Rock to a new Southern capital of cuisine.  It's hard to get my head around, as grateful as I am that it's happening.  After all, the year Chef Andre left us, Little Rock had just really discovered the bagel (that's a story for another time)... we really have come a long way in a short time.

Where was I going with this?  Ah yes, chocolate croissants.  Get one at Boulevard, whatever it's called these days.  And be thankful, food lovers, for this place and Andre's place and all the ones that came before it, that have delivered our city from being overrun with chains and franchises, that have defined what it tastes like to come from here. 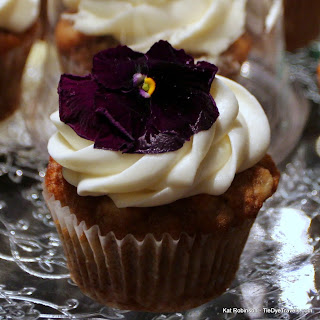 * The photos that accompany this piece aren't all croissant photos.  But there's too much pretty food at Boulevard to ignore, so you have pretty pictures to look at.  You are very welcome. 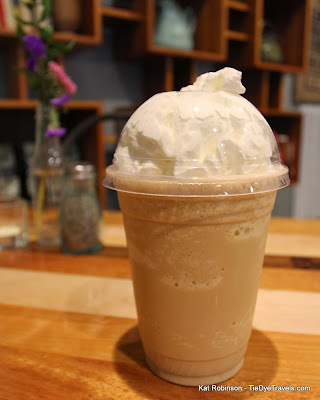 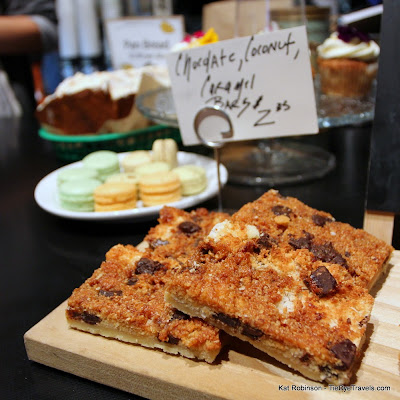 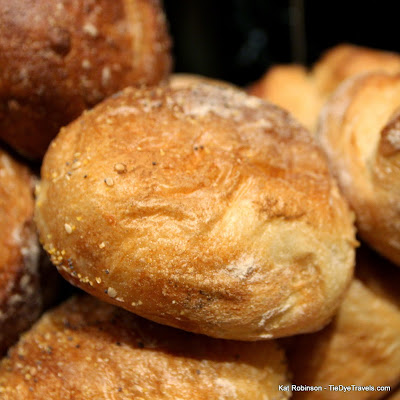