A Family Affair and Bait Shop. 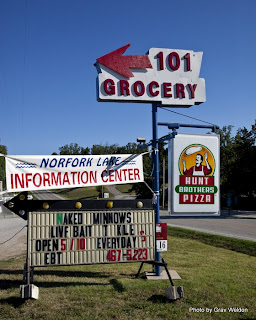 Tim and Tammy Partin run the 101 Grocery and Bait Shop in Gamaliel.  They get up early every morning and work every night to provide drinks, grocery items, bait and pizza to the folks who live nearby.

They’re not from around here.  The Partins are from Fort Wayne, IN.  Tammy was an accountant, Tim was a garbage collector.  They came down here on vacation a while back and tried out the fishing at Lake Norfork and fell in love. 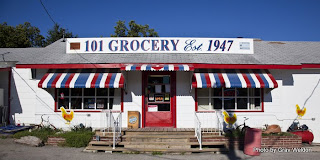 They met Frank Schubert, the former owner of the 101 -- a Chicagoan who’d purchased the place from its previous owners nearly six years before.  When he decided to move on six years ago, he sold the place to the Partin family and it’s been theirs ever since.

Their son Travis was 15 and their daughter Tracie was 11 when they made the move.  Travis now works at Ranger Boats over in Flippin while Tracie is still in high school.

“But they help us out.  There’s always one of us here,” Tim told me.  “We just live out back of here so that makes it easy.”

The Partins loves to fish and hunt, and they see a lot of different sorts of game and fish come through their store.  Tim has a box of photos he and Tammy have taken of folks who have been through.  Every sort of fish -- walleye, trout, crappie, bass, striper, you name it -- are in those photos, along with people showing off their trophy deer, turkey and boar. 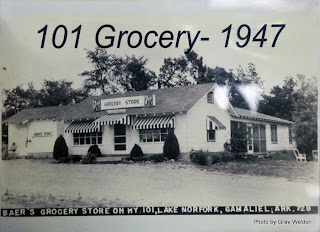 The grocery itself started in 1947, a tiny building that now comprises the center of the long facility.  The bait shop on the north end used to be an ice house; the pizza station on the south end used to be an ice cream stand.  Between those ends you can find everything from soda to soup to sandwich makings, household items and novelty gags.

The Partins have a real sense of humor.  It’s reflected on the sign out front, which advertises “Naked Minnows.” 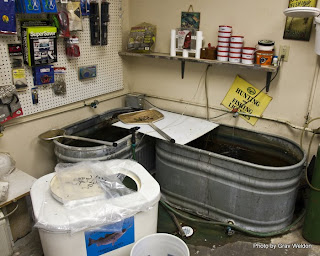 Tammy didn’t miss a beat when I asked.  “Our minnows have no clothes on.”

They offer lots of things to folks passing by -- maps of the lakes, guide referrals for those who need them.  They can pick up the phone and get you a place to stay and they know where to send you for dinner if you had a rough day on the water. 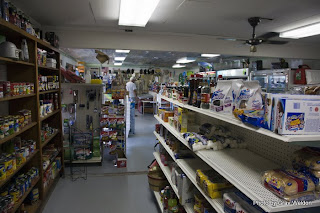 The store never closes for the holidays.  “We’re here every day, five in the morning to ten at night, even on Christmas,” Tim told me.  “We never take vacations, because we’re always on vacation here.”