Still Lovin' Lilly's Dim Sum Then Some in Little Rock. 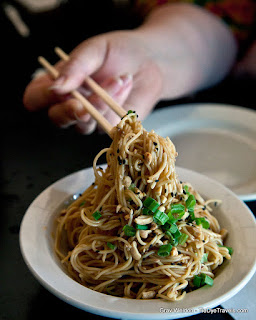 I am heartbroken to report that Lilly's has closed. ~ Kat

I haven’t talked much about Lilly’s Dim Sum Then Some in a while… and why’s that? Well, I really don’t know. Seems like I go to Lilly’s to cool my jets, and when I do I rarely think about talking about it.

Which is not right — because Lilly’s is comfort food for a widely educated palate. Fits me just right.

My dining companion and I visited Lilly’s this week for a light dinner. It was hot. We didn’t want to melt — which is why for once I actually skipped hot tea. Lilly’s always has a great selection. 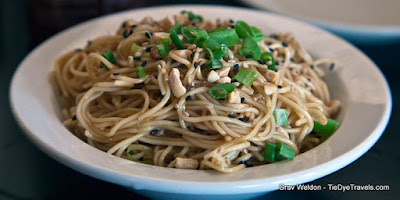 We started by sharing an order of Cold Sesame Noodles ($4.99). I could quite honestly eat this by myself and be done, you know. Thin noodles in peanut and sesame dressing topped with white and black sesame seeds, peanut bits and scallions… and served cold. But delicious. I know, it doesn’t sound like all that much, but it is. It’s also vegan friendly, which I know some of you are all about. These we shared on small plates, using chopsticks to divide the bowl. My companion, who hadn’t been to Lilly’s before, found them immensely satisfying. 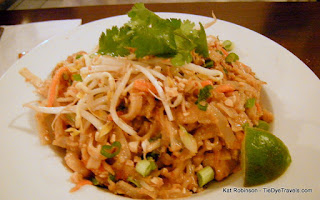 We had gone different directions with our entrées. He had chosen the Pad Thai ($12.49), which came stacked with both chicken and shrimp, peanuts and scallions, carrots and rice stick noodles tossed with peanut sauce and topped with bean sprouts. I’ve always considered Lilly’s Pad Thai the best I’ve had in the state; my companion agreed it was tasty but also pointed out the unusual texture. He equivocated that texture with that of etouffee — not unpleasant but a definite departure from the ordinary. 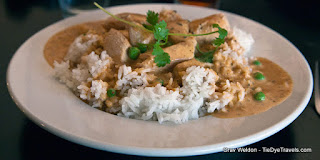 I chose the Spicy Thai Curry with Fresh Basil ($10.99). You can ask for it really spicy, but as it is it’s at the edge of how hot I like things — still enjoyable but with a pretty strong kick. It’s sweet from the coconut milk, peppery and bold. The grilled chicken is nice but I could really just eat the tar out of the sauce and rice — they make the sauce right there, and I have yet to find anyone who can successfully duplicate it.
A side note — I ended up taking more than half my dish home (as did my companion). I had some the next morning for breakfast — cold. I know it may seem weird to you, but there’s something really eye-opening about a nice peppery curry over cold rice first thing in the morning. I think it stirs back to my childhood where sugared rice was an acceptable breakfast choice. Extraordinarily yummy.

I also like that if you have leftovers, the Lilly’s folks will pack it for you in little Chinese boxes to take home. It’s a nice touch. 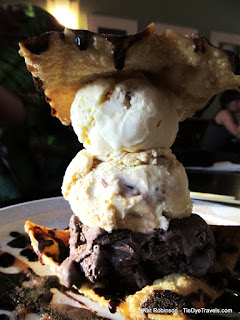 We decided to try a dessert. I’ve enjoyed the Coconut Crème Brulee before and was tempted by the special dessert of the day, a coconut sorbet. But my dining companion was very tempted by the Lilly’s Award Winning Wonton Sundae ($6.59). That might seem like a lot for a sundae — but you need to witness it. It’s ice cream between two fried wontons — but that doesn’t really cover it all. The wontons are cinnamon-dusted. There are three scoops of ice cream — vanilla, praline and chocolate — and it’s assembled vertically with a delicious chocolate drizzle. I have never seen anyone take one on by themselves.
It’s a giggle-worthy dessert. I mean, it’s just natural to try to attempt to eat it while it’s vertical. It’s going to fall over at some point, though. So much ice cream. Such nice complimentary flavors. It’s a nice, inspired dessert — and fun to photograph, too.

The best part about Lilly’s, though… is how comfortable it is. It’s quiet and subdued inside, elegant but still somehow casual. It’s a wonderful place to meet someone for a quiet and refreshingly good meal. I always walk out feeling like I’ve experienced something extraordinary.

Here are some of the other dishes I've enjoyed at Lilly's over the years.

You’ll find Lilly’s Dim Sum Then Some in the Market Place Shopping Center on Rodney Parham. It’s open every day for lunch and dinner. (501) 716-2700 or check out the website.