The Bridge That Shouldn't Have Been Built. 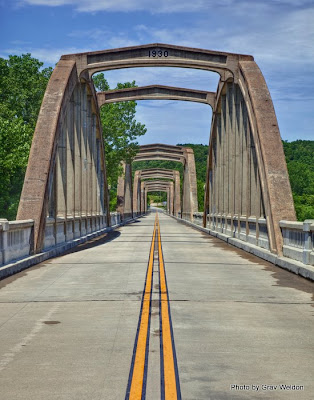 The Cotter Bridge has become one of the most famous sights in the Arkansas Ozarks, spanning the White River with beautiful rainbow arches.  But if a county judge hadn’t taken action, it might not have been built.

The Cotter Bridge across the White River is a stunning, beautiful affair, a Rainbow Arch bridge with five arches and an aqueduct that takes Highway 62’s business route high across the river at a point historically known for flooding.

However, if it wasn’t for a county judge’s actions, the dang thing might never have been built.

A little history for you.  Used to be, the only way to cross the river around those parts was by ferry.  However, the White River was a pretty untamed beast.  It tended to flood often, making ferry travel unviable.  To get over, you had to head 100 miles north up to Branson to make the crossing.  That just wasn’t going to do. 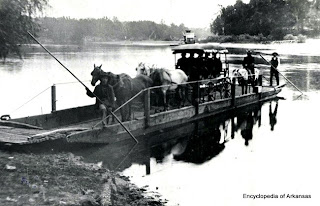 Now, back in 1905, the town of Cotter was incorporated, some 1400 lots created and sold by the Red Bud Realty Corporation.  The Missouri Pacific Railroad put a rail bridge across at that point (previously known as Lake’s Ferry) and railroad employees began filling up the town. I suppose technically folks could cross the river on the rail bridge -- but it wasn’t a really feasible way of doing things, right? 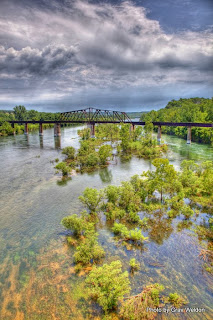 Folks wanted a bridge.  There was no denying that.  Dr. J Morrow and the Honorable J.C. Floyd introduced a measure back in 1912 to secure a bridge across the river at Cotter… but there just weren’t funds to get it going.

Money was always going to be a point of contention, it seems.

Took until 1926 for anything to really start happening as far as bridge-building goes.  That’s when two private companies came forward and proposed to build between them three toll bridges to cross the White River in the area.  They bought out three of the ferries where those bridges were going to be put.  That went over like a ton of bricks.  Arkansawyers by our very nature have a low opinion of toll roads, bridges and the like.  We just don’t have them around these parts.  It’s not just how we feel today -- it’s how we felt back then.  Want proof?  Here’s part of an editorial that appeared in the Cotter Record on February 11th, 1927:


“No truer statement was ever made than that ‘Eternal Vigilance is the Price of Liberty,’  and its truth is brought home forcibly to the people of Baxter and Marion counties by the attempted grab of toll bridge franchises at Denton ferry on White river and the ferries on North Fork.  The construction of such bridges by private individuals, companies or corporations would in effect erect a wall about Baxter and Marion counties to the serious injury of North Arkansas, the state as a whole and the country at large… a toll bridge at best is not desirable, and under such a sweeping unlimited franchise… is a positive menace, a crime… Black river is cursed with such a bridge and efforts are being made to do away with the nuisance.”

So, how’d that end up?  Turns out, there was no need to go after those companies anyway, thanks to a ruling by Congress in January 1928 that upheld the Highway Commission’s contention that it, not county courts or anyone else, had the authority to build toll bridges -- as long as those bridges were made free bridges once the cost of building them had been paid off.

What does this have to do with a county judge or the bridge itself?  Hang in there, I’m getting to the point.

Before that official ruling, the state Highway Department had obtained federal government approval to build nine toll bridges in Arkansas.  County Judge R. M. Ruthven wanted Cotter to be on that list of proposed sites.  Problem was, there wasn’t enough traffic to make that bridge feasible.  Indeed -- a feasibility study including a traffic count was a requirement for each and every site before they could be approved.  That study on Cotter was done in June 1928, and it came back that no, there wasn’t enough traffic to justify a bridge there.

Judge Ruthven went down to Little Rock and was present when the Highway Commission was to review the reports.  Somehow, the report on Cotter disappeared out of that stack of studies.  The Commission figured it must have been an oversight, approved all the studies and commissioned the bridges.

Ruthven allegedly took that report back home with him to Cotter.  He mailed it to the Highway Commission since it was the right thing to do… twenty years later.

So… after the U.S. Senate passed a bill granting the Highway Commission to issue bonds and construct and operate a toll bridge over the White River --

Yes, a toll bridge.  Seems that while private companies couldn’t get away with doing it on a state highway, the state could.  Well, there you go. 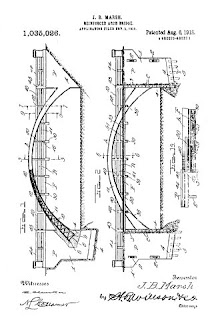 May of 1929, Frank Marsh of the Marsh Engineering Company in Des Moines, IA came down and surveyed and measured where the bridge would go.  Two months later plans were approved.  Bids were submitted, one accepted, all rejected when the plans were changed and the submission process started all over again.  Still, by October of that year the Bateman Contracting Company out of Nashville already had workers on site.  By November the materials to build the bridge were coming in and locals were being hired to help construct it, and by December piers were being set in the river.

The White River, which had been so unruly over the past several years, cooperated for once, not flooding or arguing with the men so steadily working on the bridge from a cableway above.  Folks had expected the weather and the water to be uncooperative and had planned for down days.  Instead, the bridge was completed on November 1, 1930, six months ahead of schedule.  It was dedicated on the 11th of that month.  Between three and four thousand people turned out for the party.  It was a heck of a celebration.

But while Baxter and Marion County residents were glad they finally had a bridge, they didn’t want to use it -- not and have to pay a toll.  Though Baxter County refused to renew the license of Joe McCracken, the Cotter ferry operator -- Marion County granted him one, and he kept running it.  And people kept using it. 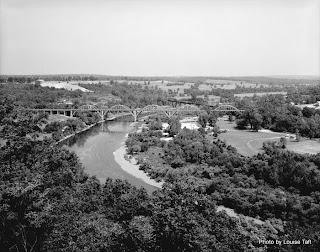 The bridge wasn’t getting paid for and the state didn’t like that.  So how did the problem get fixed?  Easy.  In July 1931 the state gave McCracken $250 to not only stop ferrying people but to destroy the ferry.  Instantly there was an upswing in people using that bridge! 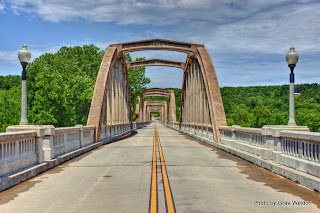 So, there you go.  The Cotter Bridge was officially renamed the R. M. Ruthven Bridge in December 1976, though few call it that.  It was dedicated as a National Historic Civil Engineering Landmark in October 1986.

A decade ago, a new bridge was opened north of Cotter… a two lane plain Jane featureless bridge that carries four lanes of US 62/412 across the White River.  Originally the Cotter Bridge was going to be replaced, but there was an outcry to save this landmark of the Ozark landscape and it was saved.  It was renovated and reopened in 2004, outfitted with new lights to shine at night.  It’s still a regal beauty, and if you’re in the area you might want to go check it out.

To get there from the west, you’ll take a right off US Highway 62/412 just east of Flippin.  From the east, it’s a left-hand turn onto US 62B right before you get to the White River, right on the west side of Gassville.  There’s a lookout point on the Gassville side where you can see both the Cotter Bridge and the MoPac Railroad Bridge next to it.  Take your camera.

This piece appears in the July/August edition of Arkansas Wild.  Grav Weldon's photographs of the Cotter Bridge and Cotter Rail Bridge are available for sale; contact the photographer for more information.
To purchase this article, email Kat Robinson at 7/21/2011 11:34:00 AM