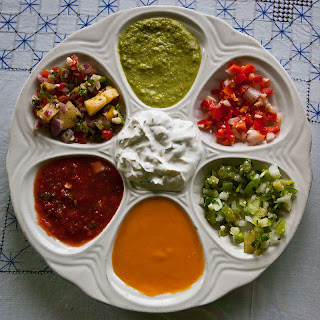 Building on the love you share with someone can be one of the greatest experiences of your life. But what happens when one part of that equation is lost?


There’s a restaurant in Eureka Springs called KJ’s Caribe Restaurant y Cantina. Caribe (as everyone calls it) is out west of downtown on Highway 62, a brightly colored and decorated building in every shade of the rainbow, oozing art. It’s a beautiful place to meet and chill. It’s also a remembrance. 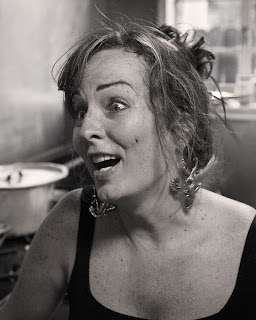 The original restaurant was opened downtown by KJ Zumwalt and Clary Perez back in 1992. Clary was the cook, KJ worked the front of the house. They had a beautiful partnership. Clary’s Panamanian food brought them loyal and friendly customers both among the locals and among those who (like me) come up on a regular basis to enjoy the town.

But some time back, KJ lost Clary. Rather than move on to another place or business, KJ did everything for that business to succeed. She moved to the back of the house, cooking all the great food from Clary’s recipes and keeping her alive through that great food. She moved the restaurant some time back, away from oppressively high downtown rents 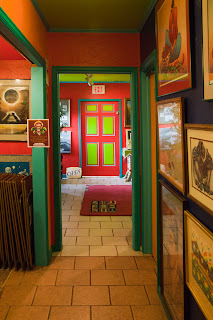 and into the building that she could eventually own outright. And every night, she cooks.

Four nights a week (Thursday-Sunday) KJ is in the kitchen with her sous chef and her dishwasher, turning out one dish after another. She’s like no other chef I’ve ever met. When I met her she was wearing a little black dress, a black apron and pink cowboy boots. And she was vivacious as all hell. 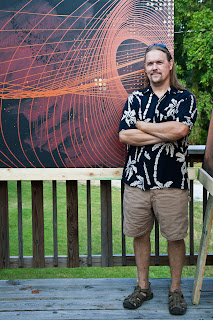 I hadn’t met her before, I don’t think, though I have dined at Caribe before… both with friends and on one specific journey on my own (poor pregnant me wanted crab cakes and Caribe had them in May 2008). I was actually there to cover an event that was part of the Fleur Delicious Festival, an art show by Robert Norman held in the back of the restaurant featuring his enigmatic sketches and paintings that center on fish and Eureka Springs. I also came for beignets.

Ilene Powell, one of the organizers for the event, came out and found my photographer and I on the back deck taking photos of Mr. Norman and swept us towards the kitchen, where KJ had already whipped up some of the restaurant’s signature guacamole. The kitchen was small but, like the restaurant, bright with color and art. Long windows left the space bright. 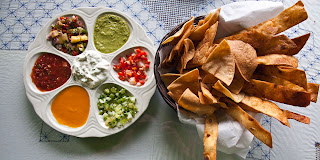 She was whipping up one of Caribe’s signature salsa platters, the Center Street Salsa Platter ($7.77), seven different items served up with a basket of housemade corn and wheat chips. Each section of salsa was different -- a mango pepper salsa that was sweet and very hot, a red bell pepper pico, a green tomato pico, a pineapple pico, a sour cream and spice blend in the center. There was a deep red fresh tomato salsa and an almost chutney like tomatillo-cilantro salsa as well. 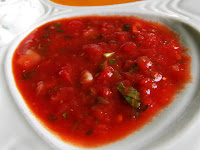 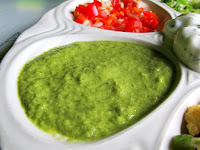 “You see the green?” she said, pointing at her eyes. “The lipstick salsa? It’s all about the love.”

And I could. These were the color palate of a beautiful love affair, one that continues through the food and the restaurant itself. It’s profound. 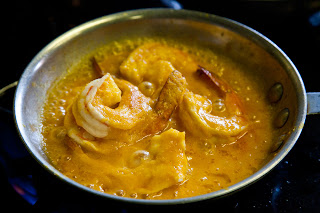 She was working on another dish for a table -- Crema O’Mango ($17.77), a pan of these gigantic jumbo shrimp being sautéed up in that sweet and peppery mango salsa. It was bright and bold and it smelled glorious. KJ’s sous chef slipped over a plate with a designed salad of salad greens topped with mango and kiwi slices, red bell pepper, red onion and that 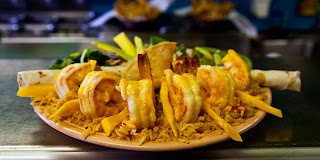 creamy cilantro sauce. The chef added the bed of seasoned rice, a pool of seasoned beans and then plopped each shrimp down one at a time, lining them up with their tails in the center. She split the space between each one with a sliver of mango and rolled a couple of homemade tortillas to finish the plate. Then off it went. The preparation was not quick but it was thorough and it was beautiful. 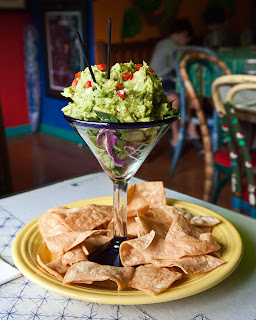 We went out to our table to dine and to do our regular work, the food. Started with the whopping Guacamole ($7.77). Served up “guacarita” style, the huge mound of fresh guacamole was piled on spinach leaves in an oversized margarita glass and topped with tiny bits of tomatoes. It was served with house made corn tortilla chips -- which I ate way too many of. The chunks of fresh avocado were huge. There was a significant bite of pepper underneath the surface, enough to make me empty my tea. That and the salsa platter, of course. 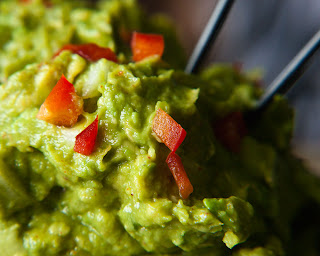 I tell ya, the flavors on the salsa platter were so complex, so different one from another. My photographer dug on the lipstick sauce, nearly drinking it in. He also loved the green eye salsa. Me? I could not get enough of the pineapple pico salsa… it was so fresh, sweet and tangy and just downright irresistible.

We coulda stopped there, really we coulda… it was so much food already. But both of us were intrigued by the idea of the Mole… especially since a couple of the regulars had already turned us on to it. There was a woman we met who was up from New Orleans, who told us she always had to come by and get a jar of mole sauce from KJ to take back with her. If the sauce were that good, we had to try it, right?

The Mole comes two ways -- you can either have it with strips of chicken breast for $12.22, or you can have it with a one to one and a half pound smoked turkey leg for $14.44. Really. Well, it was so intriguing we had to give it a shot.

Our waitress told us at first it wasn’t available, so we settled for the chicken version and called it good. We weren’t in any rush. There were assignments to discuss, and we had several of the locals we spoke with while we were waiting. 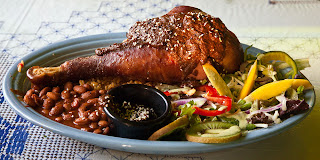 We were really surprised, then, when the Turkey Leg Mole arrived at the table. Our waitress came out and told us that when KJ realized we didn’t have to go any time soon she went ahead and pulled out a turkey leg and prepared it for us. She smokes her own. It was massive -- stretching from 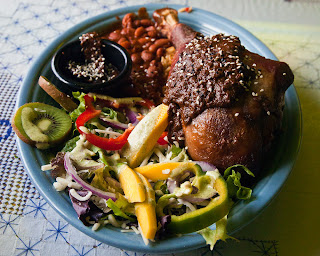 one end of the plate to another, the thick part to the side of the salad and the rest of it dividing the rice and beans below. A ramekin of mole sauce came on the side.

Let me tell you what -- it’s not the sort of thing you eat in polite company. My companion and I dickered with it with forks and butter knives for about five minutes before we gave up and just ripped the flesh off the bone 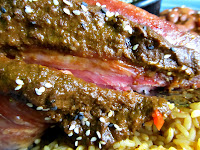 and tendons, dipping it in a bit more mole sauce and savoring the combination. The flavors… were phenomenal. 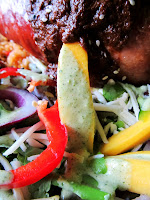 I could taste raisins and chocolate, nuts and tomatoes and garlic and… what came across as a thousand other flavors. It was so deep even I couldn’t divine half the ingredients. Sesame seeds were added on top of the sauce and on the turkey leg, and they added a lovely texture. The rice was heavenly, light and tangy. The beans were almost ranch-style, chili-powder heavy and thick. They made a good counterpart to the salad. 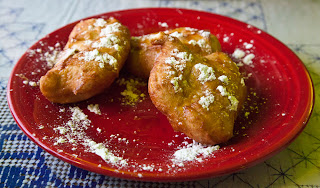 After such a dish, we had to go back and congratulate KJ on the masterpiece. She revealed to us that mole was meant for turkey, and I can see why. She was preparing an order of beignets for the occasion -- turned out, they were the beignets we had just ordered. We watched her toss them in the fryer. 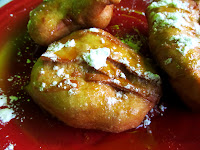 When she pulled them out she asked me for the Agave Nectar off the counter. We passed it over, and she squirted a bit on the hot beignets she’d just powdered with a light bit of sugar.

They were a fun thing -- just for Fleur Delicious -- but even this she wanted to make her own. After trying them, I think they need to be on the menu. The agave nectar made the dish. Oh my. 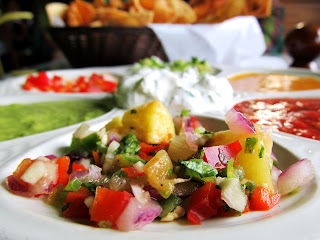 There are no take-home boxes at Caribe. Our waitress wrapped up what we couldn’t eat of the turkey leg and gave us a bag for the chips and told us it was a very unusual thing for someone to take something home. That was all right. It gave us something to munch on in the morning when we were nursing our food hangovers (I exaggerate a bit there -- we were more dealing with allergies than anything else) but… yeah.

A couple of days later, we were covering the waiter’s race down Spring Street, a key event for Fleur Delicious. And there, along with all the other participants, was KJ -- wearing those pink cowboy boots. She waved when she saw us up on the balcony. She didn’t win the race, but she did just fine… seems she’s living the sort of life she wants to live.

Which leads me to this. I know it’s traditional to tell someone you’ll love them for the rest of your life. But KJ has reminded me that it’s not a matter of life or death. Love endures. And she’s living that love, every day. It’s in her food, it’s in her personality, it’s in her restaurant and it spreads to the people around her. I have to make Caribe part of my regular list for whenever I journey up that way from now on.

UPDATE:  KJ's come up with a new concept, The Cookery at Caribe, which serves world food for lunch. Check out the Facebook page here.