The transported goodness of Steffey's Pizza. 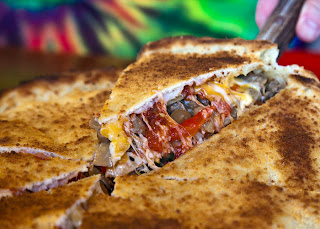 Arkansas is blessed with a lot of good pizzas... some with a cracker crust (U.S. Pizza Company, Iriana's), some with a biscuit crust (Rod's Pizza Cellar), some Napolitan style (Za Za) and some with their own spin on Chicago (Damgoode Pies).  But I have recently followed some good recommendations to a little place in Lavaca, AR that serves up an incredibly good pizza... which could be the best in Arkansas.

The place:  Steffey's Pizza.  The pie: the Uncle Roman, a double-crusted stuffed pie baked in a 12” cast iron skillet.

Steffey’s Pizza was born in Pennsylvania in 1963, where it enjoyed some success.  But for whatever reason, business started falling off or whatever, the Steffey’s decided to pick up and move to Arkansas in 1981 and try business there.  They didn’t move to any of our major cities but to a little community outside Barling that saw little to no traffic. 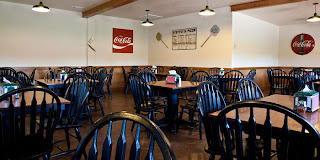 It started out in a location west of the current store before being moved downtown where it thrived for a couple of decades.  The new store has been open for about three years now.  It’s clean and homey with four big pizza ovens exposed in the kitchen that’s right in front of you when you walk in the door.  There’s a game room with a pool table, old fashion Horwitzer jukebox (that plays for free) and arcade to the left, and a dining room featuring tables lit with lights ensconced in cheese graters to the right.

The store’s now run by the Steffey’s daughter Lee Ann, and while I was in there I noticed her daughter come in with a friend for a knosh.  The waitresses are all friendly and companionable and full of answers to crazy questions.  And up on one wall there’s the original Steffey’s price marquee with the original prices.

There are so many pizzas available at Steffey’s with all sorts of toppings.  There are sandwiches, big sub sandwiches baked in the ovens.  There are nachos and breadsticks and salads.  But all these paled compared to that one specially featured 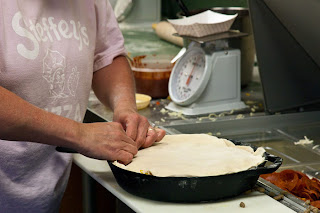 pie in the middle of the menu.


There’s just one size for the Uncle Roman, and you choose the toppings ($18.95 for one or two, $20.95 for three or four, $22.95 for more or a specialty) .  This pie was ordered up with ground beef, mushrooms, a provolone-Cheddar mix and roasted red bell peppers.  The sauce inside was light.  The cheeses glued top and bottom crust together, and both crusts were brushed on the outside with butter and Parmesan cheese and maybe a little cornmeal. 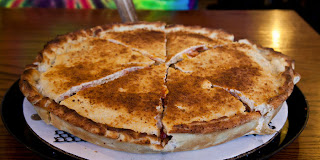 The surface of the top crust was crunchy and hearty, not soggy or tacky in any way.  It almost crackled under the fork (this is without a doubt a fork-full pizza), the nicely cooked mushrooms and peppers giving way under the fork without hinderance.  The beef is well spiced, too. 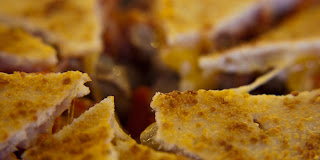 Egads, I have a new favorite pie… this deep-dish monster is over an inch thick, and the more I ate the more I liked it.  I even tried it with both the offered condiments; the parmesan cheese was good as expected, but the ranch dressing offered was a completely separate and strange experience I could 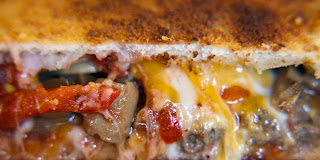 totally get behind, creating an almost sandwich-like flavor.

I bet if you wanted ranch dressing instead of red sauce you could get it.  Different offerings on the menu include barbecue sauce, mustard and olive oil as options. 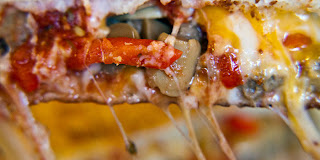 Steffey’s Pizza really differs from Arkansas pizzas in one very specific way.  The crust is not a cracker crust.  It’s not a biscuit crust, either… it’s almost a flatbread, yeasty but barely so with such a nice flavor, like the outer crust of a French bread loaf.

I look forward to going back and trying a traditional pie at some point.

There wasn’t even a hope of that on this visit.  I managed to eat a quarter of it and was pushing it at that -- I wanted nothing more than a nap after that.  Which is a shame, because Steffey’s offers chocolate covered cannoli for $1.69 each ($3 for 2) and they looked perfect -- sweet but small, about all someone could likely manage after being overcome by the Uncle Roman.

P.S.  It was even better the next day.