A different sort of castle: The Castle of Muskogee. 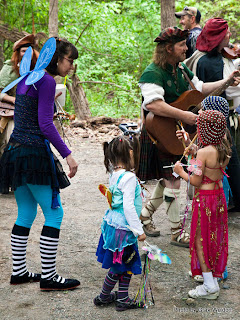 I recently visited the Ozark Medieval Fortress and was impressed by the workmanship I found there. But I’ve had several people ask me if I’d ever been to a proper Renaissance Faire… I had not. They encouraged me to go.

Now, as a matter of full disclosure, I must mention that I am a card-carrying member of the Society for Creative Anachronism, which I’ve been a part of for 20 years now. I know a lot about the Middle Ages. I do my research. I get fussy when my garb isn’t just so or the recipe I’m redacting doesn’t meet my own high standards. These things, though, I had to throw out the window before visiting the Castle of Muskogee, the home of the Oklahoma Renaissance Festival.

This annual event takes place during all the weekends of May each year at a specially built 60 acre facility on the north side of Muskogee. Performers come from several states out to join in the festivities and recreate the Middle Ages. 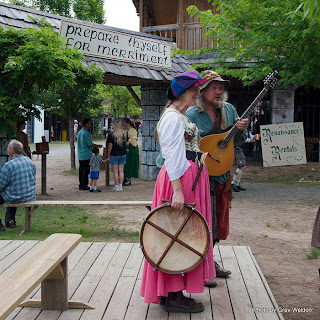 There is a certain amount of whim and fancy about the whole affair, a fact not lost on me when we arrived on the grounds on the last day of April. The parking lot is set out with north-south roads bearing the names of English kings and east-west roads named after the six wives of Henry the Eighth. There was a lady in peasant wear at the front gate hawking programs for folks entering the “kingdom” (this program is also available online here).

After purchasing your ticket, you proceed to the gate and launch yourself into a different sort of world. It is… entertaining. It’s amusing. It’s not all that accurate, but for the average Faire-goer it’s a lot of fun. 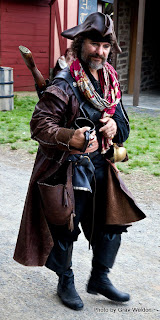 Our first stop was in a clothing shop, where one might obtain clothing to blend in with the natives. Dresses and separates ranged from $40 to $400 depending on the material used and how elaborate each piece was. We quickly noticed we were in the minority -- most of the attendees were making some sort of attempt at Medieval-esque clothing, though the hemlines for most of the ladies’ clothing I saw while there would have been scandalous even in Victorian times.

We passed a leather shop and pottery and paused at a stand selling turkey legs. My photographer absorbed my gripes about the fact that Henry the Eighth would not have been likely to have seen a turkey leg (turkeys come from North America) and that they certainly wouldn’t have been available to the peasantry, and how the closest thing to a funnel cake would have been the Indian delicacy known as a jalebi. He laughed at me and in not so many words hinted that I needed to loosen up a bit. 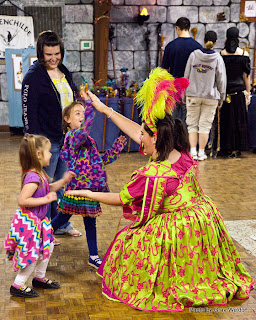 We ventured into an open-air tavern, where beer and soft drinks were being served. Security guards mingled with the public and with festival workers, some eating hunks of stew from wooden plates with plastic forks. There I spotted a woman wearing -- I kid you not -- a fluorescent green and day-glow fuschia Tudor-style dress that was about a foot shy of the ground. Underneath she wore a crinoline and stripey socks that matched her dress. Her headpiece sported matching beads and feathers, and it was by this nickname “Feathers” that her fellow festi-villians called her. She was bright and cheery and the kids loved her. 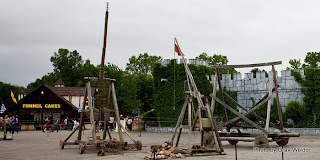 Onward we went, past more clothiers, a jewelry shop and a stand that sold rock lanterns, a pantaloon shoppery and a collection of catapults and trebuchets into a large building. This facility hosts demonstrations such as a Queen’s Tea, bards singing, courts and the like. There’s a pub in one back corner and an armory where you can look up your last name and get a printout of your family crest. 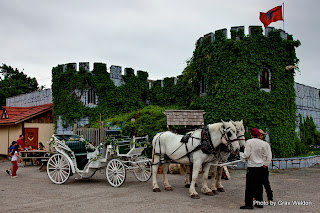 Outside this facility there was a carriage waiting, a white carriage drawn by white horses. For a fee, a few people can take the carriage around the entire park and relax a bit.

On the other side of the road from the facility was a grand ring where sometimes jousting and the like take place. There was a falconry demonstration going on, with the showing of a great red tailed hawk and a few owls. This I found fascinating… the bird were the real thing. 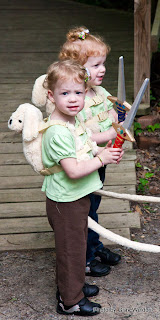 We passed by more shops, by a blacksmithy and a real armory where armor and helms were being created and sold. A soothsayer had a booth there, as did a weaver and a guy selling fox tails to wear.

It was about this point that I really noticed the children passing by. There were a lot of children, from toddlers and tots to pre-teens, most of them dressed in some attempt at Medievalwear. There were little witches and pirates and Vikings and harem girls, all bouncing about and all seemingly headed in the same direction. Parents carried a few but far more were on foot, peering into booths and attractions along the way. 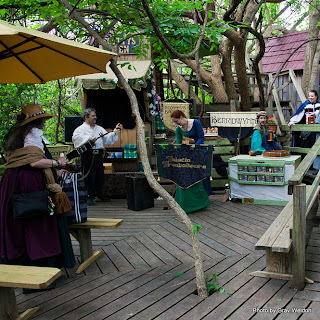 We stopped in at a small area off the beaten path, a series of decks and stepwork cloistered in the trees. A small group called the Talstin Troubadours were just wrapping up their gig. It was shaded and cool amidst the trees. Paths took off in different directions on the elevated boardwalks above the undergrowth, taking gentles back in all directions like a little bit of a maze. 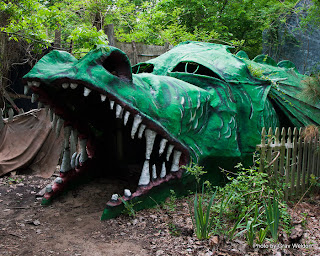 We emerged onto another road, this one teeming even more with children who were heading towards a bevy of activities along the roadside. There was a gigantic dragon’s head, which children were coming through with squeals of delight, the apparent end point of the big maze that started on another road. There were children digging for buried treasure in a sand pit with joy and fervor. There was a paper making station 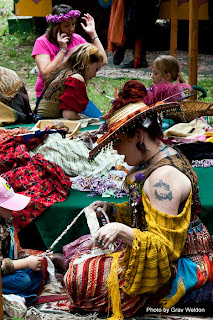 where kids were making paper together.

And there were camel rides -- for a fee, one or two children at a time would be carefully placed on a camel’s back by an adult. They would bob up and down on the slowly pacing camels as they were lead around the ring. The camels seemed amused by these activities, leisurely enjoying the smattering of sunlight that played through the leaves of the overhanging trees. 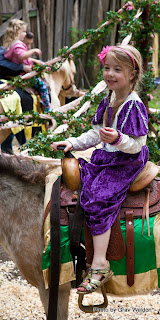 For other kids there were pony rides, the ponies shorter than I am, the kids laughing and waving to their parents, who without exception were snapping away with photographs. Every parent I saw had a camera… and most carried bags, full of the things that keep kids clean and happy like diapers, wet wipes, beverages and perhaps a favored toy or two. I was just starting to get what this Castle was all about. 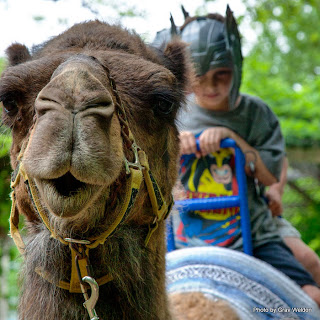 A little further along the way we passed through the Gypsy Camp, where dozens of gypsies were lounging about in the woods and under tents, sharing some small skills like bracelet weaving and bad (but not dirty) jokes with the passers by. The colors here were even brighter than we’d seen in other areas, with all the scarves and skirts and such about. Gypsy wagons sat entrenched in the dirt, staging areas for the activities of the day. 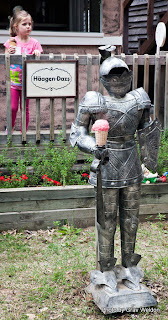 Further even still was a stage at a pub and a collection of food vendors selling everything from Reuben sandwiches to stew in bread bowls to, of all things, Haagen-Dazs ice cream. There was a giant chess board in action and all manner of shops. We did take a look through a gate and back to a pit used at the Mud Stage, but they were in-between shows at the time. 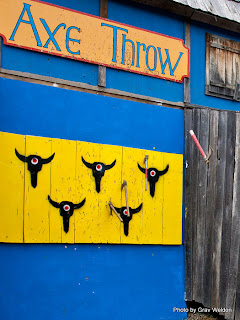 There were games of skill and chance available for the kids to play, and I watched as axes were thrown and arrows were shot. One young man went after a bale of straw for a good 20 minutes with his bow and arrow, somehow always managing to hit one of the other targets instead. He kept on until finally he managed to strike the target. His parents cheered every shot. 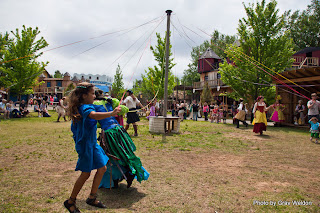 We managed to make it up to the Maypole just in time for a Maypole Dance, where the participants were members of the crowd chosen to learn how to wrap the pole with the weaving dance. There were kids and seniors and every age represented, all assisted by festival workers. The participants all seemed to be doing their best to learn the appropriate actions. When they made it around the second time there were bursts of laughter.

And it was this, really this, that bore home what I was experiencing. The Renaissance Festival at the Castle of Muskogee (and I suspect, other Renn Faires as well) isn’t about authenticity per se. It’s about a good time, especially for the kids, and just about every kid I saw there had this look about them, this gaze of wonderment that was a joy to behold. 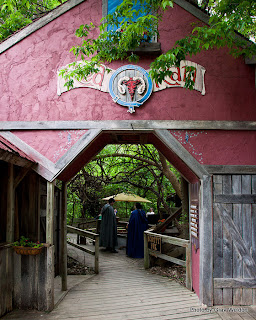 So should you go? Absolutely. You should go at least once. If even a cynic like me can find a great time to be had at such a place and be able to let loose and let go, you should be well set. Don’t expect authenticity. Expect amusement. And maybe a little astonishment. And some turkey legs.

You’ll find the Castle of Muskogee on the northwest side of the city… directions there can be found here. It’s open every weekend in May and Memorial Day. For more information, check out the website or call (918) 687-3625.

And in case you were wondering what goes on the other 11 months of the year -- the Castle of Muskogee hosts a Halloween Festival, Christmas Kingdom... and it's a prime location for obtaining fireworks.  Strange?  Well, there you go.
To purchase this article, email Kat Robinson at 5/10/2011 01:16:00 PM