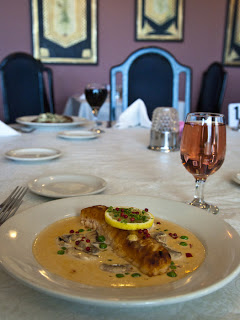 Kansas City’s loss is Bentonville’s gain. Four star restaurant chef Al Rubaie has opened up Rubaie’s Café on the south end of the shopping center at Walton and Macy. Now Rubaie is offering up splendid dishes made from scratch to diners for lunch and dinner.

Rubaie spent 30 years in the restaurant business. One of his restaurants in Kansas City made Esquire Magazine’s list of the Top 100 New Restaurants in America back in 1982. He came to Bentonville two years ago at the insistence of family and friends and opened up shop. He didn’t come alone. His son, Al Junior, works alongside him in the kitchen.

Rubaie’s concept is simple. “I wouldn’t fix anything for a customer I wouldn’t eat myself. Everything is top grade, high quality, daily made. It’s a la minute,” he says, “nothing here is pre-cooked.”

That’s what we found when we went back into the kitchen. Everything was impeccably clean and put away when we arrived, yet moments later Rubaie was already cooking, pulling out fresh ingredients from cabinets and refrigerators and creating his dishes from scratch. As we watched he created Salmon with Lobster Sauce, gently cooking the salmon to the perfect doneness. He whipped up a homemade Fettuccini sauce and added shrimp, tossed some noodles in and finished off the dish. At the same time he managed to flame a ribeye steak to perfection, adding in an herb sauce at the critical moment. There’s no question Al Rubaie is a comfortable genius in the kitchen. His concept is simple -- good European food served at accessible prices, all made from scratch when it’s ordered. There are influences of Greek, Italian and French echoed throughout the menu -- which features such dishes as Lobster Tail Thermidor; a charbroiled lamb chop with French gravy, almond and cilantro; and a fabulous Rib Eye Garlic served with fresh herbs, garlic sauce and mushrooms.

Dinners like this in a big city would run you around $50 a person, but you can feed two for that for dinner here. Lunch is even more accessible, with everything on the menu under $10. 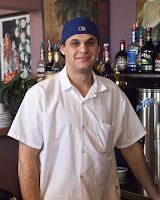 About his son, Rubaie says “he’s a good kid. Wants to be a restaurant man.” The younger Rubaie is in the kitchen rather than the classroom, learning the tricks of the trade from his dad.

Rubaie’s Café has a full liquor license, making it one place you can get just about anything you want to drink with your meal.