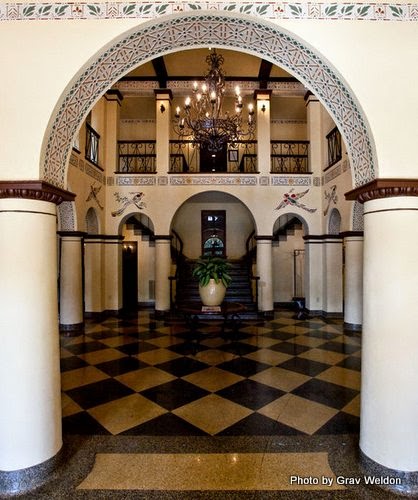 There is a flavor that is found at the world’s finest and most distinctive hotels… a flavor you sense the moment you walk in the door. It’s the signature of a property, and it’s what sticks with a customer long after they’ve departed.

The immediate flavor that comes to mind with the 1929 Hotel Seville in Harrison is that of a famous rock album cover… that of the 1976 album Hotel California by the Eagles. That taste of Old Spain in a contemporary setting resonates throughout the property… though honestly, that may not have been the intent.

The Hotel Seville underwent an extensive $3.5 million renovation in 2008 that brought in modern amenities and restored the hotel to its original glory. Today one can walk over the tile floors under the image of quetzal birds painted mosaic-like overhead, through archways and passages into a comfortable hotel. 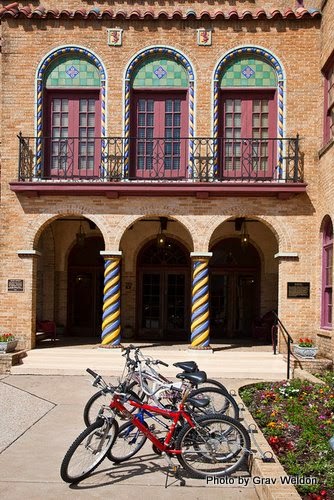 It started out before the Great Depression, before the banks failed. J. Wyman Hogg, John McNeil and Ralph Mack of the Continental Hotel Co. of Springfield, Missouri built the place at a cost of about $150,000, and it opened to serve the needs of a community that really needed a good hotel. It managed to stay afloat during the Depression and throughout the years. In the sixties an annex with suites was built onto the back of the hotel, and in the eighties it ceased to operate as a hotel, becoming instead a Peachtree Senior Center. When PFI Industries acquired it, the property was being utilized as a sort of bed and breakfast. The colors of the old marquees had faded and time had taken its toll.

A lot of time and care were taken with the renovation. The colors both inside and out were painstakingly researched and restored. Rooms unable to be expanded because of the hotel’s bones were outfitted with the most logical and space-saving accessories -- full tiled showers instead of space-eating tubs in some old single rooms, flat-screen televisions throughout and furniture designed to best fit the spaces. The bathrooms were updated with contemporary rain-shower heads and square-finished fixtures to echo the ‘20s style Arts and Crafts style furniture throughout the property.  For guests, there are even bicycles free to use to check out the sights of Harrison. 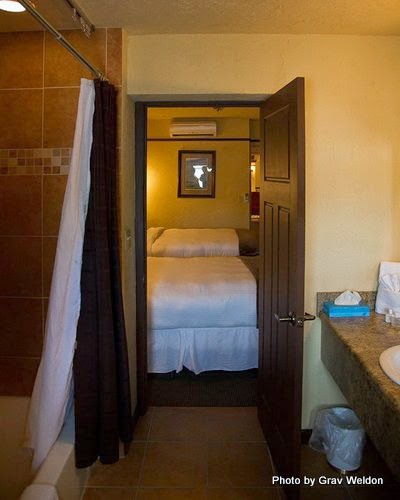 Renovating an older hotel called for some creativity. For instance, to provide light to interior-locked rooms created by the annex, skylights were added. In double-double rooms along the hotel’s north side, the windows are in the bathrooms, which are open to the main space of the room. It’s all been done quite creatively. 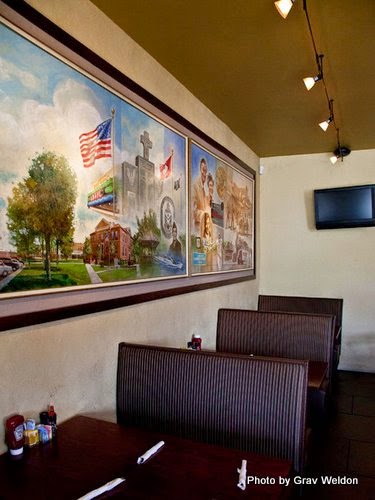 And then there’s John Paul’s. Named after longterm Arkansas Congressman John Paul Hammerschmidt, the restaurant and bar has been for a long time the only place in the county serving alcohol (Boone County just went wet in the latest election, so that might change). The restaurant serves up fine burgers, sandwiches and steaks.

On the back wall, there’s a great mural depicting many of the famous people Harrison has shared with the world -- not just the Congressman but Sheridan Garrison, who created American Freightways (which would eventually become FedEd Freight). Brandon Burlsworth, the Arkansas Razorback player killed in a tragic car accident, is there -- along with Medal of Honor recipient Jack Williams. It was painted by renowned artist Larry Mansker. 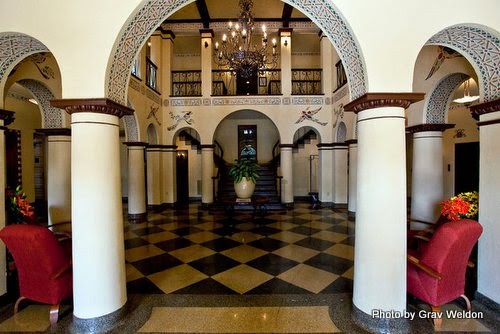 The Hotel Seville has become a very popular place in the region… especially sought after for weddings and honeymoons, intimate conferences and gatherings by groups such as motorcycle enthusiasts, military veterans and travel professionals. While I was there a group of submarine veterans were gathered with their wives, reminiscing about old times. 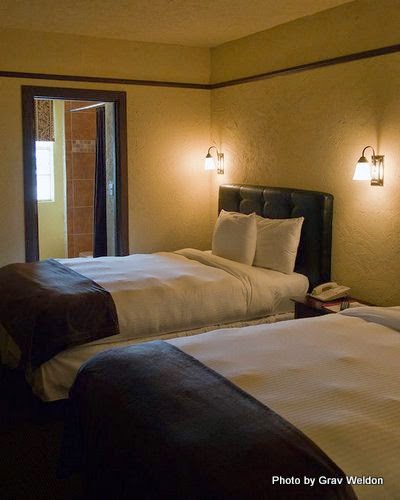 I can certainly see how that grand split staircase could be the perfect spot for wedding photos, or even a wedding on the stairs. How grand.

There are idiosyncrasies about the hotel -- all hotels have something like that. There’s a parking garage under the annex… a special game room downstairs with pool tables and big screen televisions. The old elevator is original to the hotel -- it’s a little slow, but it will get you there.

And there’s this balcony… it’s not visible from the front of the property. It’s off the annex, shared by a couple of rooms but also accessible from the second floor. I can imagine this is the perfect place to have a danish and coffee in the morning or a nice quiet afternoon overlooking the Lake Harrison Marketplace.

The best part, I think, is that the Hotel Seville’s rates are really reasonable. I’ve stayed in hotels of similar caliber across the United States and was quite surprised by the affordability. That’s something that, as a tight-budgeting freelancer, I can really appreciate.

I’d also be remiss not to mention that The 1929 Hotel Seville is the 2011 recipient of the Henry Award for Arkansas Heritage. It’s a really big deal. 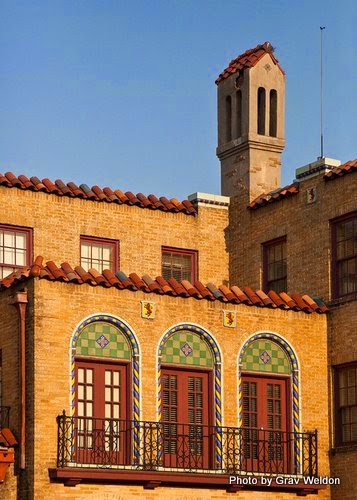 UPDATE:  The hotel changed hands and went through a brief shutdown in 2013 before reopening under the ownership of Cornerstone Bank.  Today the hotel still serves the community.

The restaurant has changed, too -- today, you can dine at the Black Apple Cafe at the Seville.  Click through to the restaurant's Facebook page here for specials.
To purchase this article, email Kat Robinson at 5/06/2011 11:52:00 AM