All Aboard for Kid Fun in Little Rock. 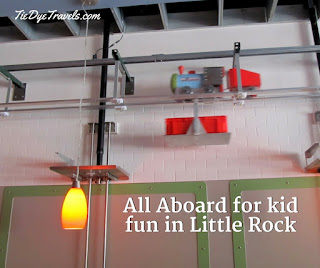 Looking for a neat experience for the kids? How about a restaurant where dinner is brought to you by a tiny train? It's time to check out All Aboard.

A railroad themed restaurant sounds interesting and refreshing. And indeed, the delivery method of such a place seemed rather intriguing. 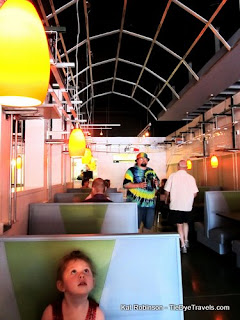 Orders are placed at the front counter and paid for at that time. You find a booth, take the key given you and have a seat. That key goes in a special kiosk right on the table — hold it there until it turns green and then place it on the side. When it goes green it registers in the kitchen, and they can set the train up to bring your meal to you via train.

That sounds great for items such as sandwiches or burgers - but what about soup? I had to see if I could get the train to safely deliver hot and delicious soup to me without incident, so on this first visit I ordered the half-and-half deal with soup. 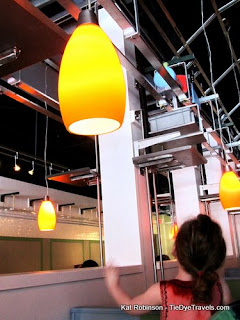 We sat with our drinks for a while, my daughter fascinated with the trains running overhead. I’m sure she’s never seen anything like it — even the train at Stoby’s in Russellville seems small and inconsequential compared to these beefy little engines that circle overhead on one of two tracks with red or gray tray boxes.

It didn’t take long for me to figure out the mechanism — when an order for a table comes up, the mechanical lift at that table elevates just enough to allow the tray under the train to pass but not the tray box underneath. We watched again and again as the trains circled by, dropping off tray boxes to one table after another. 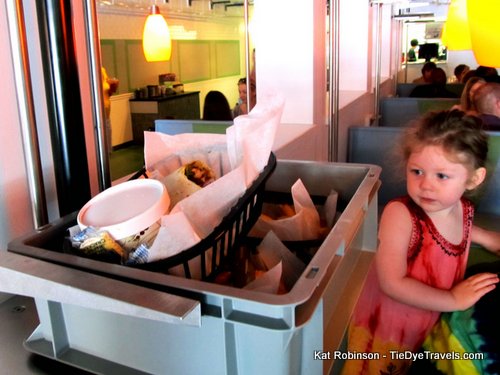 Then came our train… the mechanism lifted a few inches, the train passed, the tray box dropped onto the lift platform and the lift slowly brought the tray box down to us. Our meals were stacked inside.

My daughter’s hamburger meal came down, along with a cheeseburger and fries for the hubster and the half-and-half deal for me. By the time we’d unloaded the box an attendant came by to retrieve it.
So, our meals? 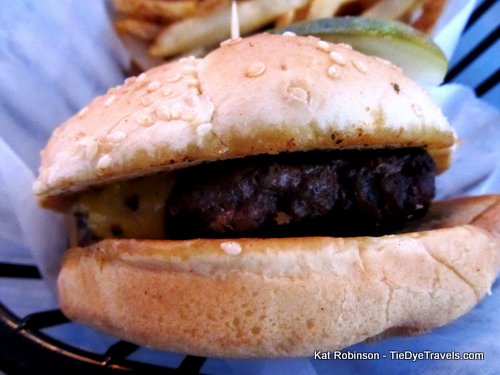 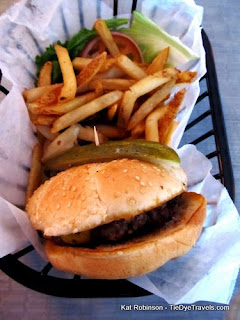 The very first thing I noticed was that Hunter’s Lil Hamburger meal ($5 with milk and fries) was almost identical to my husband’s Cheeseburger plate ($8 with fries and soft drink). The patty was a hair larger for Paul’s meal and it was delivered with lettuce, tomato, pickle and onion and his drink was larger, but I really wonder if it was worth a $3 difference.

I was also irritated by this just because there was no vegetation with the kids’ meal. It’s the second time in a week (Cregeen’s being the other one) that Hunter got a burger order that contained no vegetation. She loves 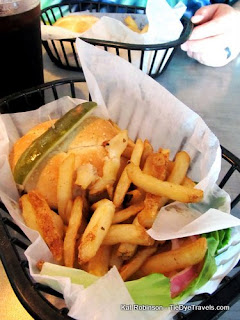 vegetables. What the heck?

The fries were bright yellow, sufficiently soft inside and just crisp enough. The patties bore grill char patterns and had a decent flavor but were on the thin side. Paul had asked for a medium rare burger but got one that was medium well… just like Hunter’s. Still, it was a pretty decent burger on a toasted sesame bun and it hit the spot.

Side items on both are variable — with a choice of fries, chips, carrot sticks, small salad, potato salad or fruit cup. 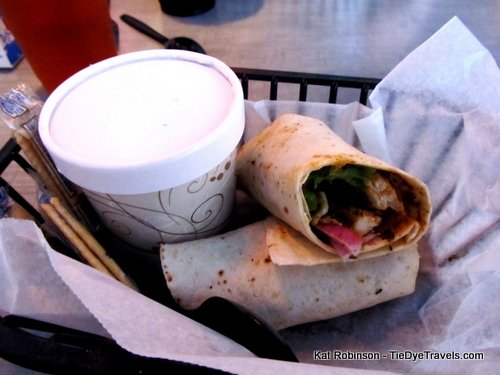 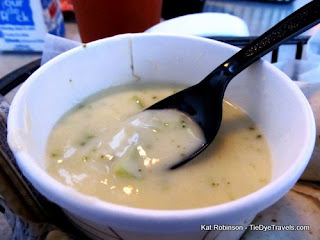 I had far better luck with my lunch, the Choose Two ($8). It’s supposed to be half of a pita or wrap and either a small salad or a bowl of soup. I chose the half wrap with blackened chicken and a bowl of broccoli cheese soup. It arrived with a nice tight cardboard cap on the soup — so there’s your answer, you curious folks, you. The wrap appeared to be whole — I suspect it was half the ingredients of a full wrap, but of course I can’t be certain.

The wrap itself was pretty decent — maybe a few too many red onions but otherwise nice with sliced Swiss cheese, green leaf lettuce and chicken strips. Those grilled chicken strips had been Cajun spiced but not quite blackened, fine by me. The flavor was quite appealing.

My real joy was the soup, though. The broccoli cheese soup was thick — nicely thick, with a good cream base and huge pieces of broccoli inside. I felt a little guilty choosing the Choose Two while my husband had to make it with a burger… a little guilty. Not that bad guilty. 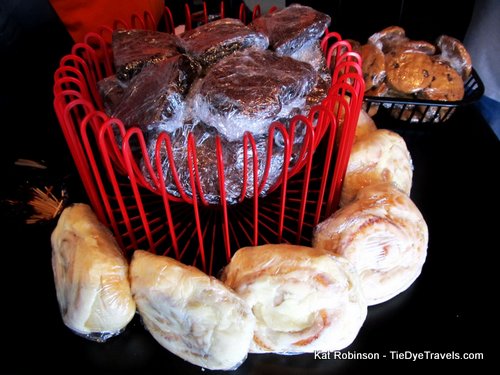 I did pass on dessert… but I did want to show you there are massive, massive cinnamon rolls there, almost as big as the ones you get at Ferguson’s up in St. Joe. They’re not listed on the menu, but chocolate chip cookies and brownies go for $2 each. 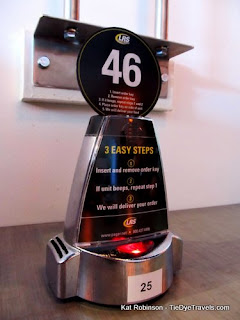 So? What did I think? I think I need to go back and try the Baby Spinach and Strawberry Salad ($8) that’s supposed to come with goat cheese and almonds. And maybe check out the chili (it’s listed as *DELAYED on the cute departures board that serves as a menu). But… I don’t know. The soup was good, the wrap was pretty decent but I don’t know if I’d order that burger again. They just got started, though, so who can tell?

Actually, no, I know for certain I’ll be back. My daughter was entranced by the passing trains overhead… to the point of having to promise to bring her back with a friend at a later date. I guess I’ll wait until next time to determine whether the entertainment value is worth the sandwich prices.
You’ll find All Aboard behind Saigon Cuisine in the Stein Mart shopping center along Cantrell Road in Little Rock. It’s open 8 a.m. to 9 p.m. Monday through Saturday. (501) 975-7401 or check out the Facebook page.

Email ThisBlogThis!Share to TwitterShare to FacebookShare to Pinterest
Labels: All Aboard, burger, Little Rock