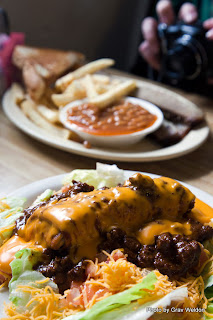 I stop a lot of places just on a whim…it’s just the nature of what I do. So on a trip to Muskogee to visit the Rennaisance Fair at the Castle, we found ourselves in need of sustenance. We decided to turn off Highway 64 and see what we could find out by Interstate 40.

The place -- a white building lettered red. Duke’s Diner. It looked promising and there were a whole lot of cars and trucks around the place, so we figured it was worth a stop-in.

We were told to sit anywhere and chose a place next to a window in a front corner. There were a group of guys towards the back sharing a table and tall tales and such. 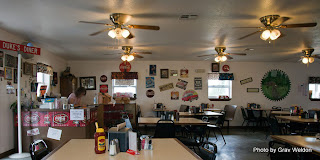 We looked through the menu. I’d been griping a lot about how I was tired of burgers, but the first thing I spied was half a dozen burgers listed on the menu. There were several sandwiches, hot dogs, burritos, plate lunches, barbecue dinners and potato options.

We both managed to miss getting a burger -- which I was told later should have been one of our choices -- but did manage to choose two very different things.

While we waited, I found my way to the “Worsh Room” to freshen up. I just thought that bore mentioning, especially because of the unusual sign over the hallway. 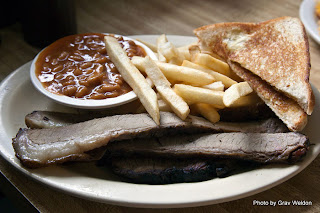 We got our plates, and my dining companion started shooting away at his Sliced Brisket Plate Lunch ($6.95). It came with French fries, baked beans and Texas toast. The brisket itself was tender but with little smoke ring, uniform in color and with a barbecue sauce heavy on honey, paprika and liquid 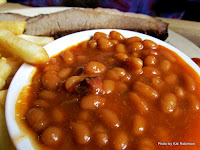 smoke. The bold sauce was a good match for the brisket.

The barbecue beans were flavored in-house, baked beans with bits of pork floating in amidst the beanery. Ample servings all around.

A perfectly normal plate lunch, right? Well, then there was my lunch. 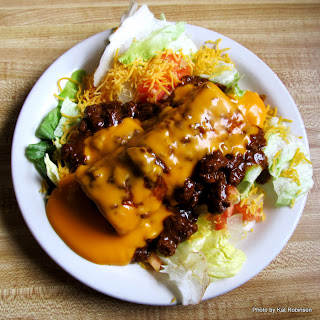 I didn’t want to eat too much and then get out in the heat (it was pushing 80 degrees and was awful humid). So I went with a Burrito Supreme ($4.95). First thing I noticed was that the items listed on the menu were, for the most part, not inside the burrito. Instead, the burrito itself was perched atop a pile of lettuce with chunks of tomato, fresh red onion and cheese shreds. It was doused in a healthy dose of nacho cheese sauce and covered in chili. Two of them, by the way, run $6.50. 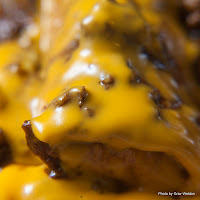 So… what I had in front of me appeared to be a burrito salad. I could think of no better way to describe it. Sadly, I never saw the sour cream or salsa that was supposed to go with the order.

But… the presentation was so bright and cheery, was it really that important? There was just something fabulous about the bright and deep yellow sauce against the bed of lettuce and tomatoes… it was gorgeous to photograph, so we did, again and again, until I was reminded that we did need to be on the road so we might go ahead and get to the castle while it was still open. 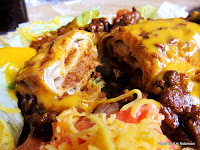 And… it was a burrito. It was a white flour tortilla stuffed with seasoned beef and beans. And for a moment I wondered if it came from a microwave. But it was better than a microwave burrito. Somehow there was a crustiness to it, as if it had been deep fried before being added to the mass of burrito salad it appeared in. And it hit the spot. 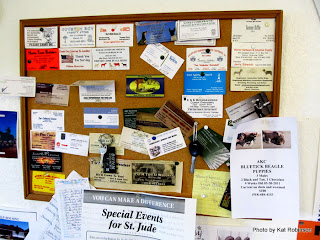 When we went to check out, I noticed this board. I don’t know what the story is, but for some reason amongst the business cards and flyers there are keys -- a truck key, a house key and who knows what else. I have no explanation for this. I wondered about it and am still wondering about it.