Miss Rhoda has pie, too. 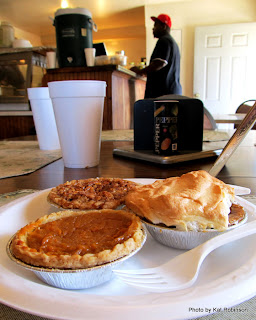 You know, sometimes the best things come in small packages. The best pies don’t always come in an eight or nine inch pie shell. And you’re just as likely to find a good pie at a hole in the wall restaurant as at a five-star eatery.

At Rhoda’s Famous Hot Tamales in Lake Village, those pies come in tart shells. But they pack just as much of a punch as a slice of a big pie. 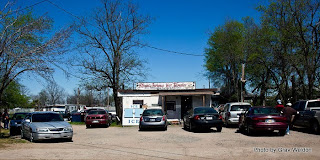 Now, you can order a big full-size pie from Miss Rhoda, if you like. But if you’re just dropping in for a hot plate lunch or a coffee can full of tamales, the little pies will do you just fine. 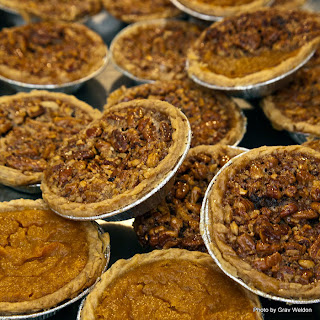 That’s just what we did on our way down to New Orleans last week. My traveling companion and I left Little Rock extra early to pick up a few assignments here and there.

We arrived at Rhoda’s right around lunchtime and the joint was packed. The parking lot was packed. There were people sitting outside to eat and a line inside the door. That’s how good those tamales are. 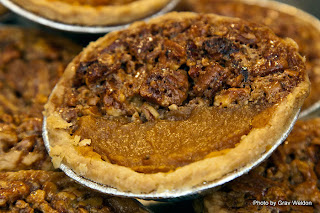 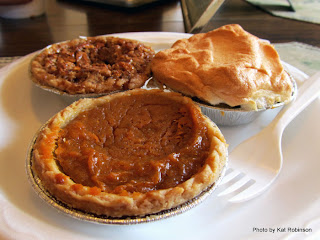 We’d already eaten once that day (and you’ll find out more about that meal soon) but had saved just enough room for the pie we were there to check out. Seeing the little pies on the counter was a relief; no oversized slices here. Best of all, each pie was a buck.

I almost got the one little half-and-half pie of the bunch, a pecan-and-sweet-potato beauty. But what sort of service would that have been to you? I have to try them all out and make sure I recommend the best one of the lot. 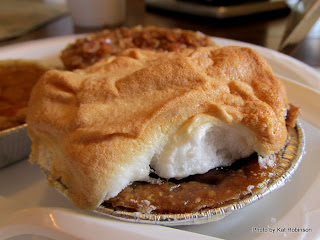 We tried three of the pies -- the chocolate meringue, the pecan and the sweet potato. The chocolate meringue was a nice filling chocolate custard with a tacky meringue top, sticky and gooey in all the right ways but not fluffy like most meringues. It was tasty, but still not the star of the show. That was so hard to determine. The sweet potato pie has its own renown, and I know why. It’s a firm, not-too-sweet made-from-the-real-deal pie with just a bit of fibrous potato left in the mix. There’s no doubt you’re eating a sweet potato pie when you bite into it.

The crust is supple and buttery. The consistency is firm. The sweetness is measurable. It’s a good filling little pie. 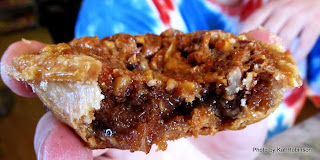 But the real star is the pecan pie -- a rich, deep color custard with a hint of butter and bourbon overtones. It’s meaty and a little cloying, but for its size it’s perfect, bigger than the pie shell goodness. 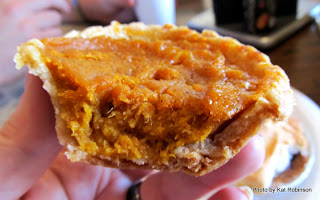 There’s a depth to each bite, that combination of good Karo-nut syrup and fresh shelled pecans. It’s the not-to-be-missed star of the bunch. 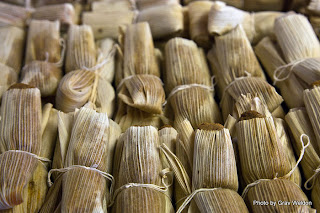 Now all this time we’d been in the restaurant, my photographer had been shooting around, and Miss Rhoda wanted to know why. 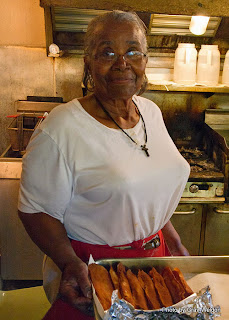 We told her it’s what we do, taking photos of food and sharing them with people. She let us shoot the unsteamed tamales all ready to go. She let us shoot around the inside the restaurant. She even posed for us in her kitchen. She’s one hell of a dame, and we owe her some photographs. Of course we ordered tamales -- we left with a sack of a dozen to take on the road with us. The intention had been to have a sit-down closer on the road to New Orleans. However, a barge had struck the I-20 bridge at Vicksburg, and we were left sitting in a parking lot in Mound, LA waiting to cross. 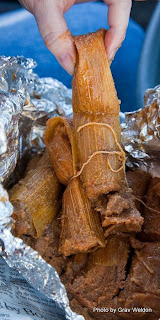 It was a shade cool, it was late afternoon and the only food in site was a pub on the north side of the interstate and a convenience store on the south. So we dug into the bag, pulled out the paper-wrapped package, tucked it open and pried open the aluminum foil. There we found those sweaty corn-husk-wrapped beauties, steamy and soft, softer than even I’ve ever had them in the store. Lacking the appropriate plastic ware, we took turns pulling out husks and sliding messy fingers along them, pushing out the soft tamales and eating them like, well, like Push-Up orange sherbet pops. I am not afraid to say I sucked the shucks. A roll of paper towels kept us from totally desecrating the interior of the vehicle. 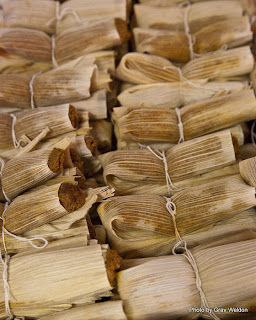 I tell you, I’ve had tamales many places, I’ve had Miss Rhoda’s tamales more than a time or two -- but they never tasted better.