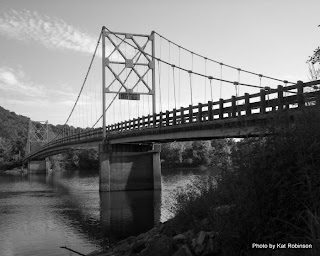 Rumbly old bridges have a place in my memory… bridges where the planks creaked under the weight of tires as you eased between metal railings over creek beds below, low-water trestles you were careful to aim straight on with no rail at all between vehicle and muddy passage. They were a fantastic fright and yet maintained a sort of beauty, dares to be taken across waterways and ravines. 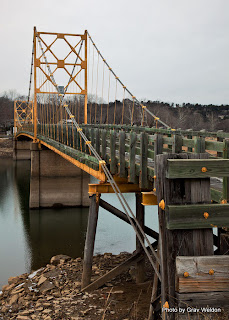 Most of the old wooden bridges I recall from my youth have been replaced or just torn down and routed around. But there’s one in northwest Arkansas in the town of Beaver that’s still there… just as rumbly and rickety as ever, allowing a single vehicle to pass at a time.

The bridge is known as the Little Golden Gate Bridge. It’s painted yellow and hangs -- yes, hangs between two towers over the White River. The bridge is singular in Arkansas, the only single-lane suspension bridge you’ll find in the state. Some call it the “bridge to nostalgia.” Some call it a scary damn ride they’d rather not make again. I call it hauntingly beautiful. 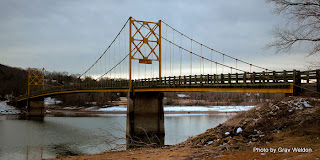 The roadbed is wooden planks that creak when you head across them, no matter the weather. They sort of squeak a bit when it’s wet, creak when it’s dry and moan with a strong wind. There’s a stoplight on each end to tell you when it’s safe to cross -- and there’s no room for error. There are no wide load crossings on Highway 187 here -- the bridge is just 11 feet wide, but it’s 554 long and you don’t want to have to back across it, no way.

But the Little Golden Gate is the bridge people always recall at Beaver… and usually the other bridge, the one lost to time on the north side of town, is left for the dustiest of historians. Years of neglect have left the second bridge a mere shadow on the water. Both have their place in cinematic history. 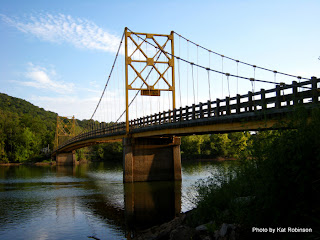 You’re far more likely to recognize the Little Golden Gate because of a popular movie. The year was 2005. Orlando Bloom was a hot property at the cinema, and Elizabethtown was the show. I can see why Cameron Crowe chose to include the image of this bridge and the tiny town beyond it as part of Drew’s journey. If you haven’t seen the movie, you should, just for that bit.

I first came upon the bridge by utter surprise last March. I spend a good deal of my free time in Eureka Springs, soaking up a bit of Ozarkian peace before heading back into the wilds of the city as I tend to do. This time around my husband and I were staying out at Holiday Island. We were coming back in from lunch in Eureka Springs and missed the turn-off, rolling across Highway 187 and coming around this curve and seeing this beautiful yellow bridge far below. 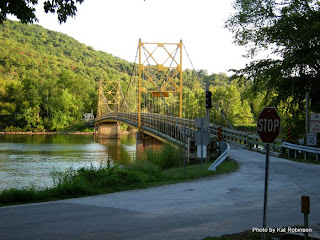 We didn’t realize it was a single lane until we were almost upon it, seeing the green light and rolling right onto the planks, all creaking and squawking as we nervously crossed. On the other side we pulled into the riverfront park, got our bearings and took a few photos. I made note that I needed to travel back here again to see this wonder and to properly tell its story.

In the interim I learned more about the bridge. It was built in 1949, almost 100 years after William A. Beaver settled at the crossing at Rector’s Place. Beaver would go on to open an inn and grist mill and a ferry to cross the White River there.

I returned again in January with my photographer, a couple of days after a snowfall, eager to see whether we’d be directed elsewhere for our river crossing. We’d come via Highway 62 east of Gateway and were expecting to be turned back. But the snow had melted plenty and the bridge was clear. 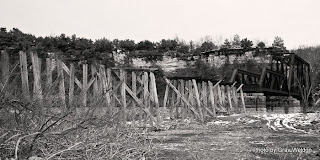 I was expecting to hear the delighted gasps of sighting the bright yellow bridge in the distance… but instead I realized I did not have his attention. That stare was relegated to the north to the forgotten rail trestle that crossed from Beaver on the west bank through a chiseled 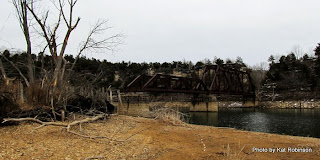 passage through the east bank’s cliff. The cold hard tones of winter had set in, and it was like looking at a sepia photograph of something forgotten. I keep using that word, “forgotten,” and it seems apt.
The Beaver Railroad Bridge 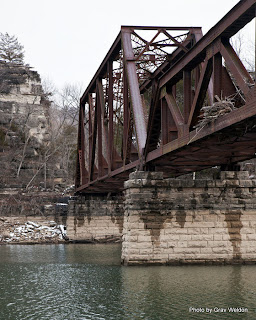 had been built in 1907 by the Wisconsin Bridge & Iron Co. -- but its usefulness passed decades ago. It was a through-truss bridge, a main span and an approach span mounted upon rock-constructed piers across the deeper part of the river, wooden pile bents sequentially standing from where the bridge was once whole back as far as the RV park above and alongside the White. The decking is long gone.

I would later learn this bridge too had its claim to fame, being one of the many locations shot in the 1982 TV mini-series The Blue and the Gray. 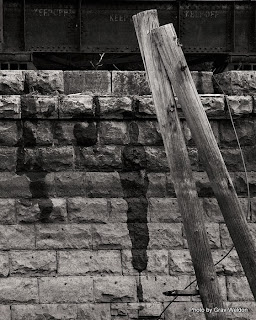 There was a quietness about the day… no motion save the wind, no noise save the call of birds. Below my feet was just wet sand and minute mussel shells. 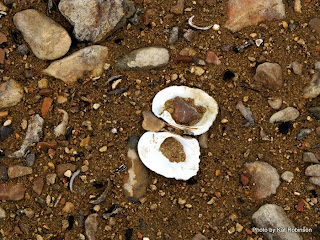 The sheer size and scale of the bridges… is odd. The old rail bridge when you are 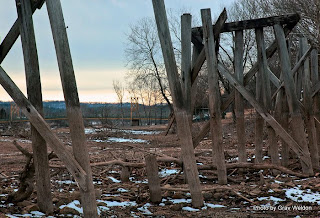 down to the water’s edge is imposing. The Little Golden Gate on the other hand seems delicate, almost fraught with anxiety above the currents. Yet coming from the east you rarely notice the rail bridge, and if so only once you’re past the white-knuckling of the suspension bridge crossing. From the west, you have to be looking in your rear-view. 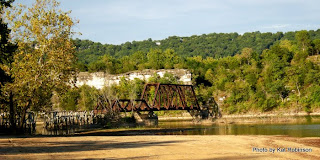 Still, they are there, frozen in time much like the quaint little community they both share. In warmer weather I’m sure the river is full of boats and people and the RV park may not have a single space free.

All so quiet, just north of 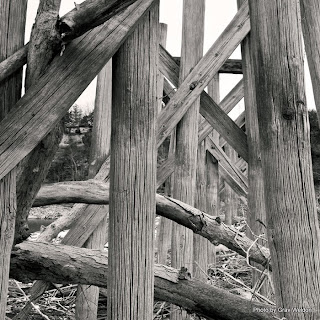 Eureka Springs with its tourist-fueled optimism and bluster, yet still so worthy of the drive.

You’ll find the Little Golden Gate Bridge and the Beaver Railroad Bridge at Beaver, AR. To get there, head four miles north of Eureka Springs on Highway 23 and turn left onto Highway 187. It’s about two and a half miles to Beaver.