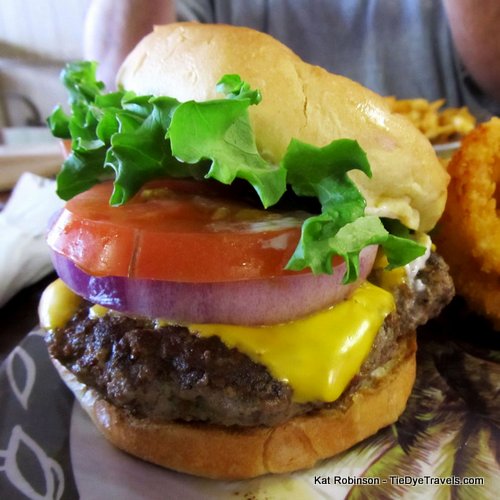 Okay, I have a significant pet peeve about waiters. I’ll air it right now: Unless you have a perfect photographic memory and a flawless record of error-less order-taking, do not attempt to take someone’s order without writing it down.

That’s how I got that burger right there, the Skipper’s Burger at Thirst ‘N’ Howl, with American cheese instead of Pepper Jack. And how one of my companions received Pepper Jack on his Thirst ‘N’ Burger. I wish it weren’t the only issue I’d had at the restaurant out on Highway 10... because I rather liked the burger itself.

I stopped by a few weeks ago with a couple of my favorite dining companions for a quick spot of lunch. The idea of a Gilligan’s Island themed restaurant seemed fun and lighthearted, and I’d already been alerted to the perceived awesomeness of the burger by an astute and happy reader.

The restaurant was smaller than I had expected, a real storefront bar and grill down the strip from Blue Cake Company and the like. There was a TV playing an endless stream of Gilligan’s Island reruns, a bandstand and some light beach themed decorations. It was also close to empty, being about two in the afternoon. 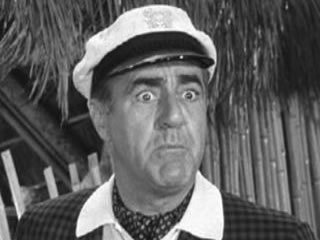 We sat down and nodded through the fanciful entries. The restaurant’s name, Thirst ‘N’ Howl, is a play on the name of Thurston Howell the Third from the series. Most of the menu items have related names — Mary Ann’s Coconut Shrimp, Ginger’s Hut Salad, Professor’s Crab Cakes. I lamented the lack of a “Little Buddy” menu for the kids — seems like a no-brainer to me. We all flipped the menus over and perused the burger menu. I was kinda surprised to see the term “hand patty” listed for each one. Surely they meant hand-patted…

One of my dining companions warned me about the tea. He had arrived earlier and said it tasted wrong somehow. On questioning our waiter admitted it came from a mix, “a very good mix, you should try it,” he mentioned. I opted for Dr. Pepper instead. That’s right, I’m a tea snob.

My two dining companions dared each other to give the Volcano Burger ($7.50) a try. It was listed as coming with pepper jack, lettuce, tomato, Million Dollar Sauce and jalapeno peppers. They backed off, neither one really wanting to take the risk in the middle of a work day. The Island Burger ($7.50) was tempting with its slice of grilled pineapple. When both of my companions decided on the Thirst N’Burger ($7.50) I figured I should go with the basics and settled for a Skipper’s Burger ($6.50). 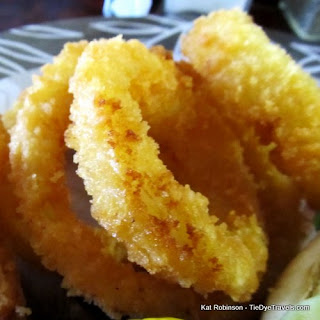 Here’s where I had my problem. Our waiter came over and took our orders, without writing anything down. He’d gotten through mine and was on the second one when he had to check with me about my order again. I ordered my Skipper’s Burger with his suggestion of cheese, pepper jack. One of the guys went for American. I suppose I shouldn’t have been surprised then when my burger arrived with American instead of pepper jack. I did alert him to the problem but dealt with it — I was short on time that afternoon. 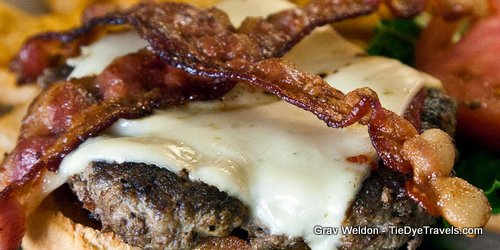 We all took our usual pictures. The guys had both gone for seasoned fries instead of chips ($1.75 as a “first mate,” $1.25 as a substitution) while I had chosen onion rings ($2.75 or $2.25 as a substitution). Their burgers appeared to be identical, half-pound patties with a layer of fire-roasted garlic ketchup tucked under melted-on pepper jack cheese with a topper of criss-crossed bacon slices. Both agreed — the idea of the ketchup was good and it didn’t detract from the burger… but it didn’t really add anything, either. The bacon was crispy. 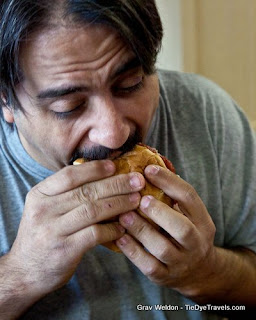 One of my companions gave the mango mustard a shot on the side, and declared it to be “somewhere between a sweet and sour and a honey mustard sauce with a light kick of spice.” Next time I’m asking for that on my burger.
The onion rings were cornmeal breaded and appeared to be pre-made instead of housemade. I can overlook that. They were cooked through well enough to have that sweetness in them that I like. 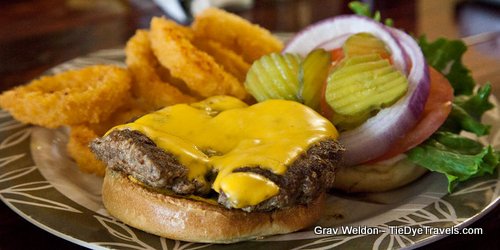 The burger… well, it was a pretty good burger. Served with American cheese, the Skipper’s Burger is a classic All-American burger (you can also have it with Swiss or pepper jack). It’s a nice Cavender’s-and-black-pepper flavored half pound burger patty cooked medium well, sitting on a soft untoasted and unseeded bun, griddle-cooked with cheese melted into the patty. It comes with ridgy hamburger dill slices, red onion, a couple of chunks of tomato and green leaf lettuce with a gob of mayo under the top bun and a good quality stoneground type mustard on the bottom. It’s a very good example of what most people think of in a burger. 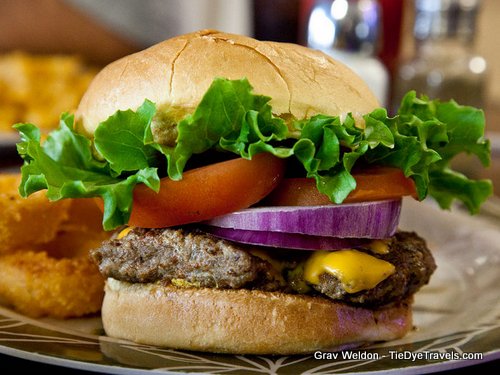 But it does seem a little bit pricey for this market, just because of the whole fries/chips thing. I have become spoiled with great burgers at the same price that came with fries instead of chips.

Still, Thirst ‘N’ Howl’s burgers should be included on any list of good burgers in Little Rock. They are worthy. Let’s see how well the restaurant manages to hold its own amidst the plethora of burgers around these parts.