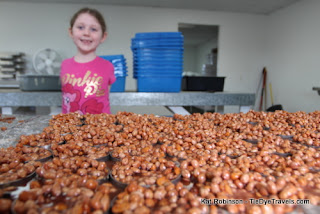 Peanut patties, those delightful sugary creations that have often graced the palm or pocket of a traveler in need of sweet delights, are common in the southwest.  Let's take a look at how they're made at Texarkana's own Elve's Peanut Patty Company.


Check out the video at the bottom of this page. 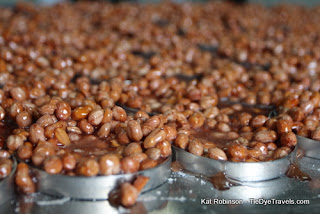 Hunter and I made the detour on our epic road trip on US Highway 71 to watch the making of the famed round patties and to see how they were made.

Elve Otwell had been working at a candy company in the 1950s.  The company made a lot of different confections, including peanut patties.  But Otwell didn't care for how they were made, so he came up with a new recipe and started making his own.  Thus, the Elve's Peanut Patty Company was born in 1956.

Over the years, his peanut patties gained wide renown.  They became a staple at the Four States Fair in Texarkana each year, and at just about every gas station and grocery store in Miller County and beyond.

A few years back, Mr. Otwell decided to retire.  He first sold the business to Pam Brackman, who in turn sold it to Joe and Shelly Hickey.  Today, Mr. Otwell and Pam and Shelly are the only people who know the recipe and the exact ratios involved in making those peanut patties. 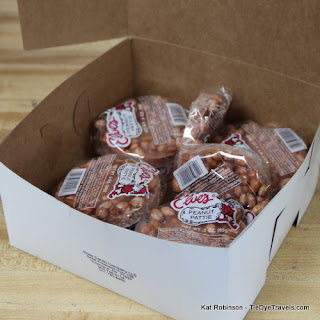 First thing you need to know is that the product is always fresh.  If you order your peanut patties online, they're made after you order.  They're available in boxes of 20 that way, which is great if you don't live in the area and you'd like your own.

The patties are all delivered to stores by the Hickeys, too, so they know exactly where those peanut patties are going... including places like the
Monster Mart in Fouke, and the Hampton Inn in Texarkana.

The second thing you need to know is - all peanut patties are not created equal.  Almost to the letter, every peanut patty I've seen except those sold by Elve's are pink or red.  That's due to food coloring, and it's just not necessary.  The patties Elve's makes are a little pinkish, but that's because peanut skins can be a little reddish. 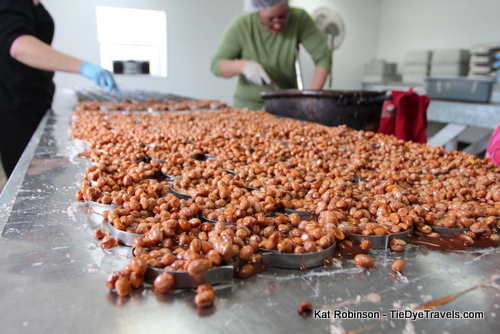 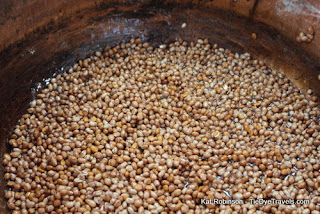 At times, they're not.  Shelly told me while we were watching the pour that sometimes peanuts come in very pale, even almost white.  Like other crops, there are a lot of variables in growing peanuts, and they can come out a variety of colors.

The peanuts used are actually from within a short distance, from Texas and Oklahoma.  They could be from Arkansas, when there are enough peanuts being produced to purchase them, but Texarkana is a border town and these peanuts are still local to Elve's. 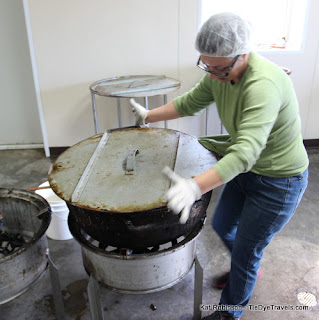 As I mentioned, we watched the pour.  We arrived on a Monday morning and entered just as the big copper vat was being brought from the kitchen to the steel-lined pouring table.  Hundreds of little steel rings are laid out on a steel sheet on top of that steel table, and the hot peanut candy is poured into each one of those rounds.  Each batch from the copper pot makes about 250 peanut patties.  The ingredients 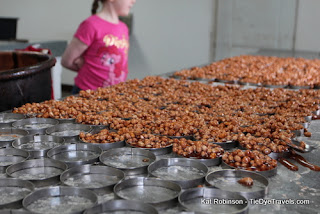 As Shelly worked on pouring in the candy, her assistant used the back of a spoon to smush the mixture down into the rings.  A lot ended up outside the rings, but that's all right.  I'll show you why in a minute.

This little operation isn't open to the general public.  Some candy places offer tours, but all that's made here are the peanut patties.  That's okay, I'm showing you around. 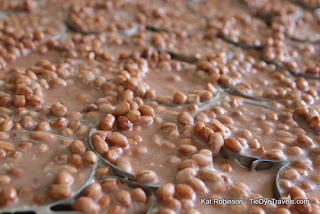 Because it was humid, it took a little longer than usual for the candy to set.  An average batch takes 20-30 minutes to cool and solidify.  Fans are trained on the table from both ends to help the candy set quicker. And there you go.  It's simple but it's also labor intensive, pouring all that 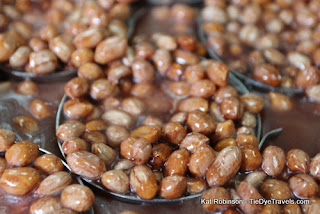 Shelly says Elve's Peanut Patty Company goes through about 1500 pounds of peanuts a month on an average month, but much more during the Four States Fair, when new patties are delivered daily to the fairgrounds. 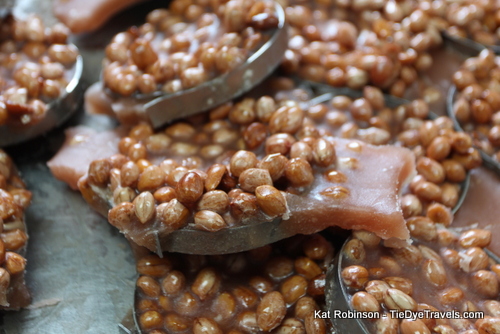 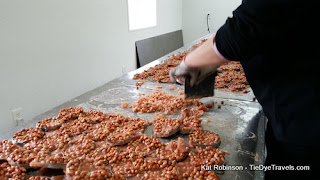 When the candy had cooled, Shelly and her assistant took what appeared to be a broomstick, lifted the end of one of the steel sheets and ran it underneath.  They then both grabbed an end of the stick and pulled it to the other end 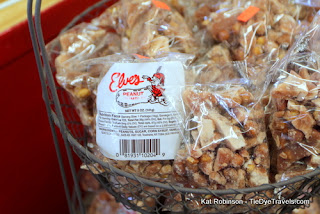 of the table, creating a steel wave under the patties in their steel rings.  This breaks them into patties and crumbles.  Once the patties are transferred to steel tubs, the rings are removed and Elve's Peanut Patty Crumbles are made from the remaining candy on the sheet.  It's a good use of the candy and means there's no waste afterwards. 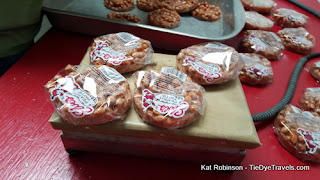 Afterwards, each patty is wrapped and sealed... and it's ready to go.

In the coming months, Elve's Peanut Patties will be arriving on shelves here in Central Arkansas.  That means more of us will be able to enjoy these 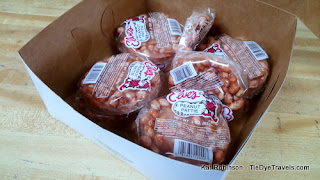